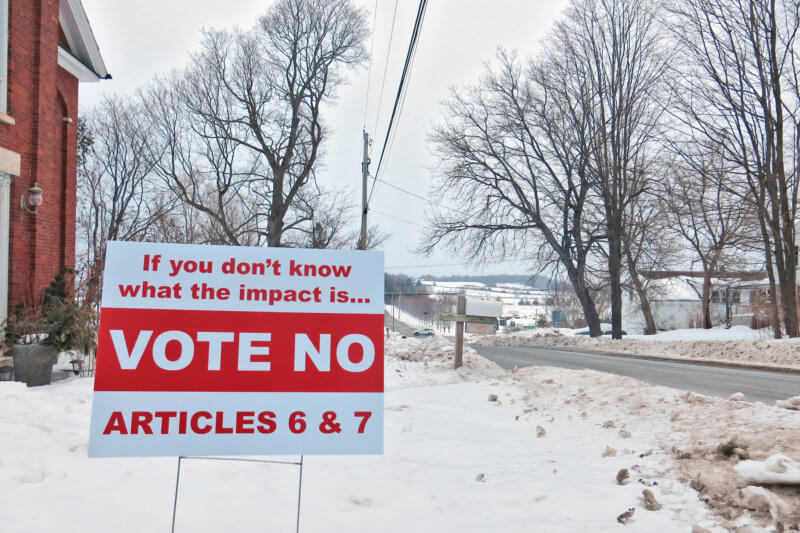 Signs urging voters to vote no on next week’s ballot items have gone missing from people’s lawns. Photo by Alex Bunten.

“If you don’t know what the impact is…vote no.” A group of Charlotters printed these lawn signs and distributed them around town over the past weeks in an effort to convince other voters to vote with them on Articles 6 and 7, which are appearing on next week’s ballot on Town Meeting Day. These articles are focused on an issue that began, like many do, as a disagreement about when, how, and why Charlotte should plan for the future; now a series of sign thefts by an unknown perpetrator or perpetrators has added fuel to the fire of the Land Use Regulation (LUR) amendment debate. Some of the signs are removed completely, and in other circumstances, the paper section is gone but the empty wire frames remain.

Joel Cook of Charlotte, who does not support passing the LUR articles, said that individuals stealing signs troubles him because “doing so is neither neighborly nor lawful,” and that he is “dismayed that anyone engaging in this sort of behavior thinks silencing others in this adolescent manner will help these inadequately considered articles get adopted by townspeople.”

In a series of Front Porch Forum posts and emails to The Charlotte News, over a dozen Charlotters expressed their anger that the signs had been taken from their property and noted that removing them could be counterproductive. In one post, Ebeth Scatchard wrote, addressing the thief, “Your actions have had the opposite effect on me. It wasn’t until earlier today that I knew how I’d vote on Articles 6&7…I am going to vote NO against Articles 6&7 for multiple reasons including the undemocratic action of multiple signs being stolen. East Charlotte is not Russia…we must not be silenced!”

Carrie Spear owns Spear’s Store in the East Village and is on the Selectboard; her store is within the commercial district that would be affected by the LUR changes. She said she doesn’t know who has been stealing the signs or why they did it, but also that she didn’t appreciate their presence in town. She said they bring a “sad vibe that I’ve never seen in my twenty years there.”

Clark Hinsdale, a former Charlotte resident who owns property in the East Village that will be significantly affected by passage of the articles, has been vocal about his support for the LUR amendments. He frequently responds privately to posters on Front Porch Forum when they complain about their signs being taken, and said he always tells them first, “I am sorry that your signs were stolen.” He also noted that he has “the opposite problem. I’ve had people put Article 6 and 7 signs on my property,” he said. He also said he doesn’t know who has been removing them from people’s property.

Selectboard Chair Matt Krasnow, who has not publicly stated whether he will vote yes or no on the issue, is firm that removing signs from people’s property should stop. “Stealing political signs off private property amounts to theft, vandalism and an attempt to mute people’s right to free speech and is completely unacceptable,” he said. He urges people who disagree to find other ways to communicate. “My hope is for the town to discuss, debate and vote on town-wide issues being well informed, with honesty and while upholding our shared values of mutual respect for each other even with irreconcilable differences of opinion.”