Christine Cowart was living in New Jersey and skiing at Pico almost every weekend when she started seeing skiers with orange bibs. The bibs were worn by blind skiers and their guides from Vermont Adaptive Ski and Sports. “It dawned on me how amazing that was,” she said “and I thought it would be incredible to be part of something like that. Vermont Adaptive Sports had a ‘come-one, come-all’ perspective and they were willing to take anyone, train them, build up their skills, and use them in any capacity where they could help.” 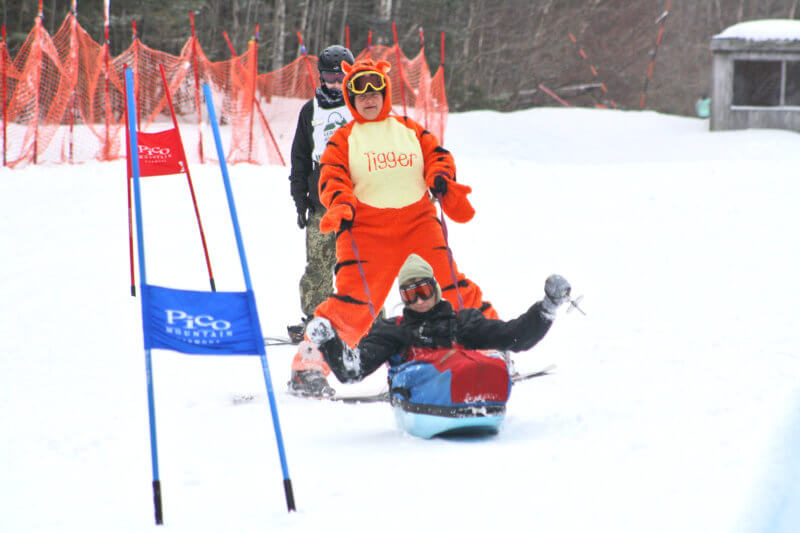 Volunteer and advocate Christine Cowart combines her love of skiing with her desire to help others. Courtesy photo.

Cowart started volunteering with Vermont Adaptive Sports in 2002 and since moving to Charlotte in 2015 has concentrated her efforts at Bolton Valley resort. In January, she was honored as one of the nonprofit’s volunteers of the year. Sadly, she is sitting out this season because she has two sons who are high-risk should they be exposed to COVID-19. Although Cowart initially worked only with blind skiers, she expanded her volunteerism to include physically disabled athletes who use sit-skis, as well as those with emotional and developmental disabilities. She also works with a program called Pushback for Parkinson’s which is affiliated with Vermont Adaptive Ski and Sports.

Cowart has come a long way since her initial volunteer efforts. Vermont Adaptive supported her when she went through the process of getting certified by the Professional Ski Instructors Association to teach blind and developmentally disabled skiers. She is also a certified child specialist with PSIA and a certified adaptive recreation and sports specialist through an organization called Blaze Sports America.

After working for several years with Vermont Adaptive, Cowart and her husband adopted two boys who had trauma in their background. That helped spur Cowart to become a certified trauma professional as well as a member of the ACE (Adverse Childhood Experiences) Speakers and Trainers Bureau. “Sometimes techniques you would use for a typical child are not the ones to use for those who have been exposed to trauma,” she explained.

Cowart has worked for the State of Vermont as a policy analyst, first for the Department of Corrections and now with the Department for Children and Families. In addition, she recently started her own business providing training on the impact of trauma on people of all ages. She launched that venture with a presentation for Vermont Adaptive volunteers. “We rolled that out in the fall of 2019,” she said. “I thought it would end there but the response was overwhelming and people said I should present it to a wider audience. Some people said it helped them understand both others and themselves better and it just snowballed from there.”

Since then, Cowart has created trainings through PSIA and an organization called Move United, but she has also gone beyond the athletic world to provide training on trauma-informed policing for an organization in New Jersey, another for teachers in New York City, and yet another on transforming correctional facilities, which she described as trauma-inducing environments. Cowart noted that due to the pandemic, she is able to reach a wider audience through virtual seminars.

Vermont Adaptive Sports is not Cowart’s only volunteer activity. She served one term on the Charlotte Trails Committee and since 2018, she has been involved with the Charlotte Central School diversity committee. “We came to Vermont to find a better quality of life and we’re really happy to be here,” she said. “Not a single member of our family would say we didn’t find that, but there are things that can be improved and I try to dig in and bring that around.” Cowart’s sons come from South America and watching people react to them has led her to spend more time on equity issues including co-chairing the Racial Equity Committee for the Department for Children and Families. “We noticed that there is some work that needs to be done,” she said “and I wanted to advocate for them.”

Among Cowart’s favorite activities are hiking and skiing, which is one of the reasons the family moved to Vermont. She is happy to be able to spend winters with Vermont Adaptive Ski and Sports to pass her love of that sport on to others. “As much as I feel like I’m doing something that can hopefully help someone else, it’s sort of selfish,” she said. “I like to be out there on the mountain and I’ve made some of my best friendships through that program. Vermont Adaptive is such an amazing organization. I’ve loved every minute of my involvement.”