The Community News Service gathered voter vignettes from across the state on Tuesday, Nov. 3. Here’s what they came across in Charlotte. 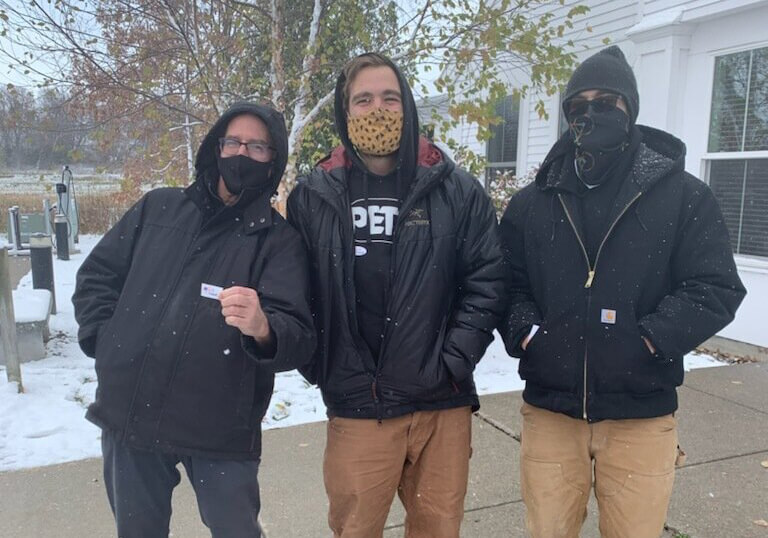 3:45 p.m.—As the sun begins to set behind the Charlotte town hall, Jean, a 48-year-old physician, arrives to cast her vote.

She brought her daughter with her to share with her the experience of exercising the right to vote. The majority of votes have been sent in through the mail, and it was important to Jean to physically see her ballot submitted.

As a Democrat, Jean hopes to see elected officials tackle gun control, environmental responsibility, and healthcare. Amidst a dire pandemic, Jean hopes this election will improve the United States’ global standing and mend damaged relations that have been caused by the current administration.

A Biden-Scott voter in Charlotte

10:58 a.m. — In Charlotte, Megan Brancaccio was driven to vote in person today partly because she “slacked off” in mailing in the ballot she received, but mostly because it felt official and she wanted to be sure her voice was heard, she said.

Concerned primarily with national politics, and women’s reproductive rights in particular, Brancaccio is looking into the future with “a little bit of fear,” but even more with a commitment to “stay engaged and awake even if we get what we want after today,” she said.

What Brancaccio wants is a Biden win, and despite not being a particularly political person or involved with state politics, she nonetheless voted for Governor Phil Scott again, citing his “communicating with the community” and action “in this time of crisis” as the main force in that decision.

3:32 p.m. — Steve Schubart, 34, traveled from his ranch on Tuesday to make his voice heard — though he meant to mail a ballot.

He drove to Charlotte Town Offices to vote in person after realizing that the permanent marker he used on his mail-in ballot had bled through the pages and compromised his vote.

He hopes that this election will heal divisions being made in our country; however, fears that the result of this election will divide Americans even more so than they already are. Among his top concerns in local and state government are environmental impact, he said.

A first-time voter turns out in Charlotte

10:45 a.m. –Three coworkers explained why they came to vote in person this morning.

“Because I live right up the road, it was really easy,” said Julian Lacroix, 30.

Simon Burrows, 60, had a more monumental reason, “This is the first time I’ve ever voted in my life so I had to come and do it in person,” he said.

“It was the first time I was eligible, so I planned to vote regardless of the circumstances in 2020,” Burrows said.

All three voters expressed apprehension about the outcome of the presidential election, Elliot Lacroix, 30, saying what makes him nervous is the potential of a contest of the national results.

Julian says that even though neither candidate was his first choice, he still saw the importance in voting, “It’s important I think to get Trump out of office so if Biden is our best chance and is the elected chance then I will vote for him, and he has my full support.”

Watching it go into the machine

9:17 a.m. — With a young son in a fire-truck-red winter coat bumbling out the front door to play in the snow, Elisabeth Miller of Charlotte said she felt a deep sense of satisfaction and security watching her ballot “go in the machine.”

Motivated not by fear but by what is possible, Miller said, she hopes the election will bring prison reform, cracking down on drugs, citing President Trump’s leadership on those issues.

Miller, a native of Addison Country, is looking for Vermont to be “friendly to business, and be friendly to farmers,” in a way she does not feel the state is now.

The Community News Service is a partnership between local media outlets and University of Vermont students who are studying journalism and documentary storytelling.