The Charlotte News filed an Open Meeting Law violation complaint this week with the Charlotte Zoning Board of Adjustment (ZBA) and plans to appeal for the full release of a batch of redacted emails from that board that the town shared after a News public records request. 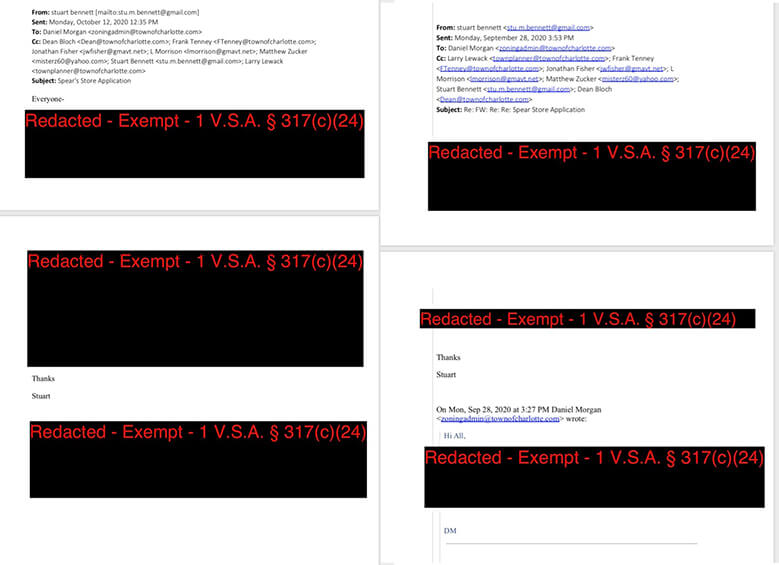 The Zoning Board of Adjustment, through the town attorney, shared 209 pages of mostly redacted emails in response to a public records request from The Charlotte News.

Vermont Open Meeting Law states that minutes of public meetings should be posted within five days on a town or board’s website; the coronavirus pandemic caused the Vermont Secretary of State’s office to extend that period to 10 days. The law reads in part, “Minutes are public records and must be made available for public inspection and copying after five calendar days from the date of the meeting. If a public body maintains or designates a website, minutes must also be posted to that website no later than five calendar days after the meeting.”

The complaint was filed Wednesday, Nov. 4. The town has 14 days to respond.

On Oct. 26, The Charlotte News submitted a public records request for email communications and documents from the Zoning Board of Adjustment relating to a conditional use application by Carrie Spear and Court Street Associates. The application was submitted to and approved by Zoning Administrator Daniel Morgan, who warned and set a hearing for the ZBA’s Oct. 14 meeting.

Spear and her project manager, Dan Goltzman, were prepared to present their application at that meeting for the addition of a deli and upstairs apartment to Spear’s property, Spear’s Store, on the corner of Charlotte Hinesburg Road and Spear Street in East Charlotte.

ZBA Chair Frank Tenney recused himself from the hearing based on his personal relationship to Spear as neighbors and the fact this his brother owns Tenney’s Snack Bar and bottle redemption center next door to Spear’s Store. At the Oct. 14 meeting, Vice Chair Stuart Bennett said that the board had decided “internally” that Spear’s application was incomplete and that they had decided upon a “new way” of processing and evaluating applications before they came before the board. He ultimately made a motion that passed 3-1 to deny the application, before Spear and her representative made their presentation, on the grounds that the application is incomplete.

The ZBA does not have authority to decide whether or not an application is complete; that decision falls to the Zoning Administrator, in this case, Morgan.

Town Attorney David Rugh of Stitzel Page & Fletcher responded to The News’s public records request on behalf of Town Administrator Dean Bloch, who is the town records custodian. He redacted most of the emails, citing Vermont law protecting “records of, or internal materials prepared for, the deliberations of any public agency acting in a judicial or quasi-judicial capacity.”

From Monday, Sept. 28, to Wednesday, Sept. 30, as well as on Oct. 12, a series of emails, all of which were redacted by Rugh, were written among Morgan, Bloch and all members of the ZBA, including Tenney, who had not yet recused himself from the matter. The subjects of these emails, sent during those periods by Bennett to Morgan, Town Planner Larry Lewack, Tenney, and ZBA members Lane Morrison, Matt Zucker and Jonathan Fisher, were titled “Spear Application” and “Spear Store Application.” One email subject read “Re: FW: Re: Re: Spear Store Application,” which indicates that the email had been forwarded and responded to multiple times.

Rugh wrote in an email to The Charlotte News, “To be clear, in the emails provided to you from September 28th and 29th, the ZBA was discussing and deliberating regarding a decision on the completeness of the Spear Store application and its details, not general policy on processing applications.”

Rugh also wrote, “The deliberations of a public body acting in a quasi-judicial capacity like the Charlotte ZBA, which are often called deliberative sessions, are exempt from the notice and warning requirements of the Open Meeting Law pursuant to 1 V.S.A. § 312(e).  See also 24 V.S.A. § 4461(a) (‘All meetings of the [appropriate municipal panel or ZBA], except for deliberative and executive sessions, shall be open to the public’). As a result, emails that are records of the ZBA’s deliberations do not constitute meetings.”

“A Guide to Open Meetings,” published by the Vermont Secretary of State’s office, identified deliberative sessions as such: “A public body may meet without notice or public attendance when it deliberates on its written decision as part of a quasi-judicial proceeding. A quasi-judicial proceeding is a case in which the legal rights of a party are adjudicated, conducted so that all parties may present evidence and cross-examine witnesses and resulting in an appealable written decision.”

In this case, the ZBA had not yet met regarding the application; The Charlotte News is appealing the redaction of those emails based on the fact that if the board had not written a decision or met on the matter, the written materials relating to the application are not yet excluded from public record as part of a quasi-judiciary proceeding.

The Charlotte News also filed a public records request on Oct. 28 for emails and communications relating to the “internal” discussions resulting in policy change that Bennett referenced during the Oct. 14 ZBA meeting. Rugh, on behalf of the town of Charlotte, said the volume of emails that need to be read and compiled prior to disclosure is so large that he needs an extension beyond the legally allotted three days, and will provide those communications on Nov. 9.

Bennett declined to comment for this article, and Tenney did not respond to multiple requests for comment.

*Editor’s note: Zoning Board of Adjustment member Matt Zucker is married to Claudia Marshall, who is the publisher of The Charlotte News and president of its board.*