The votes are in…at least in Charlotte

The votes are in…at least in Charlotte 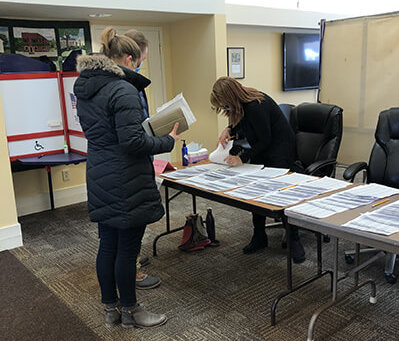 Charlotters cast their ballots early and enthusiastically this year—out of 3,317 total registered voters in town, 2,920 voted in this year’s November election. Town Clerk Mary Mead and Assistant Town Clerk Sy Koerner weren’t up until all hours of the morning counting, though. Mead said they were finished by 8:00 p.m.

The reason for such an early night, despite so many ballots to count, is absentee and mail-in voting. Because of the coronavirus pandemic, the Vermont secretary of state’s office mailed ballots to every registered voter in the state. At around 2:30 p.m. on Election Day, Nov. 3, Mead said she had already put 2,715 ballots through the counting machine; she started at 7:00 a.m. with absentee ballots, which totaled 2,606.

Though the national election has yet to officially declare a victor in the presidential race, Charlotte’s counts were decisive. Following are the official election night results, with the top finishers reported in each category: