After a dry summer/fall, recent rains and warm spells have brought on a widespread mushroom fruiting here in the Champlain Valley. For those interested in gathering and eating wild shrooms it’s a great time of year. For beginners there are two tasty ones currently fruiting that are particularly easy to identify, quite distinctive in appearance, and safe/good to eat, as well as many others. They’re likely growing right now on local lawns and pastures in your neighborhood. 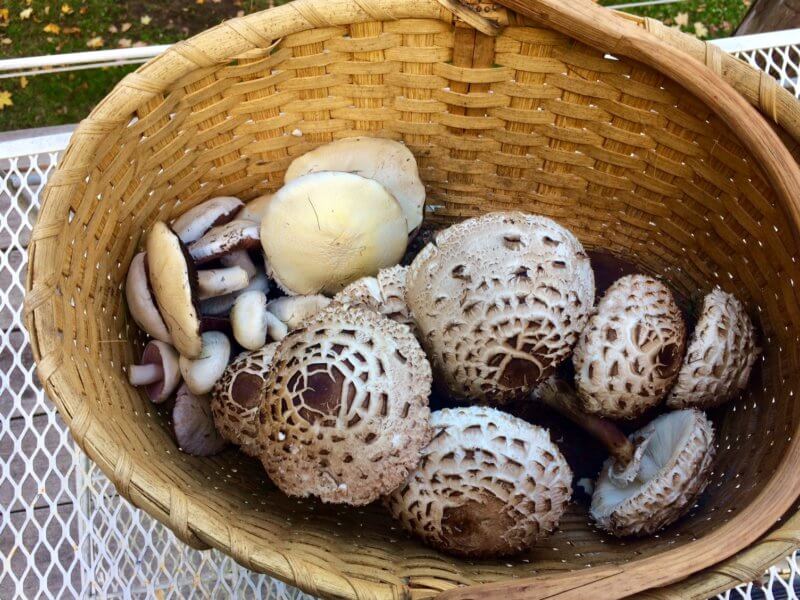 Most folks know about the risks of eating poisonous mushrooms, anywhere from gastric upset to certain death (Amanita poisoning is a killer). I suspect this fear might inhibit some folks from learning how to gather edible mushrooms safely. The key early on is going after varieties that are especially easy to identify such as Shaggy Manes and Meadow Mushrooms (which I describe below, currently widespread), with no poisonous look alikes. There are many other similarly safe ones easy to learn such as springtime Morels, puffballs large and small, orange Chanterelles in summer, many others. Once you learn them and know where they grow, you can come back regularly. It’s good to go out with an experienced forager when possible. Look at photos online and in guide books. Never eat a mushroom you’re not 100% sure of. Always save one or two uncooked just in case.

The beautiful Shaggy Mane (Coprinus comatus) has a white distinctly conical shape with a shaggy/scaly surface, usually in clusters/groups, in a lawn or mowed pasture, also along roadsides. As they age the lower edges turn a black mess and the whole cap just melts (auto digests). Nice light flavor picked young. The appearance (look it up), location, and the black autodigestion are key to positive ID.

The ‘Meadow mushroom’ (Agaricus campestris) is the first cousin to the store bought kind and somewhat similar. Smooth buff dry white cap, low in the grass. The gills at first are covered by a thin veil, then are pinkish color but become brown and leave a brown spore print The key is the appearance, location in grass/pasture, brown spore print (see below) and gills as described, and me finding them currently in many locations. Look up photos for comparison. Send me a photo if unsure or ask your local forager. There are several edible first cousins out there too with similar characteristics, especially the gill color and spore print. (Cut off the stem and lay the cap on white paper for a while to get a spore print.)

A mushroom is the fruiting body of a higher class of fungi, akin to the flower of a plant, it does no harm at all to harvest them. The actual ‘plant’ is a vast network of filaments in the ground (or rotting wood) called ‘mycelium’. Fungi are the ubiquitous original composters, converting dead leaves, dead trees, dead dogs, anything organic (even motor oil) into a usable elemental form. (See Paul Stamets’ great TED talk on YouTube: “Six ways mushrooms can save the world” Fungi are a unique life form having branched off from the plant and animal kingdoms very early on in the evolutionary tree of life; they combine cellular features of both animal and plants. In fact, systemic fungal infections in humans are very difficult to treat because of their similarity to human cells, yet they grow just like plants. Fungi were the first organisms that emerged from the sea to live on land, paving the way for all that followed.

For more advance foragers, I picked a bunch of beautiful ‘Shaggy Parasol’ mushrooms this morning (Lepiota rachodes) a great edible, very different shape from the Shaggy Mane. Look up photos and if you have a similar one send me a photo and I can review the important ID details. This gem has a white spore print (as does the Amanita family) so not one for beginners, but distinctive (and delicious) once you know what to look for and where it has previously grown.

Incidentally mushrooms can be grown at home, indoors and out. Oyster mushrooms are especially easy, can be grown on straw, sawdust, even coffee grounds, in a closed bucket in your back closet. Or one can buy ready to grow kits that just need watering, (especially Oyster mushroom varieties and Shiitake). The company, Fungi Perfecti is one good resource for everything mushroom. I know that some folks absolutely hate mushrooms, that’s too bad. I understand childhood culinary trauma but who didn’t love Campbell’s Cream of Mushroom soup?

It always surprises me that despite years of foraging and a small library of field guides, I still come upon distinctive looking mushrooms every season that I just can’t identify. It’s an extremely complicated field and frustrating at times. A good field guide is essential (I like the Audubon guide in general but use several others to cross reference.) Online resources are widespread. There’s a delightful movie called “Fantastic Fungi” that came out last year, beautiful, very informative that can be found on YouTube.