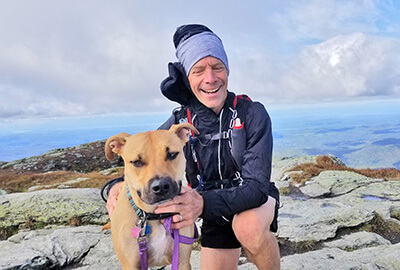 Jack Pilla and his dog Ducati ran to the top of Mt. Mansfield. Courtesy photo.

In a normal year, Jack Pilla would be traveling to compete in Ultra running races like the 100-mile Bighorn Trail Run in Wyoming, which should have taken place in June. Instead, he is spending his time and energy locally, running up and down Pease Mountain with his dog Ducati and going back and forth on sections of the Town Link Trail and the Town Village Loop. He has run every day for over 14 years, totaling 56,000 miles in that time span.

Pilla ran his first marathon in 2001, and several years later, he began running Ultra races. In 2009, he was the first Vermont man to win the Vermont 100, and he has raced nationally and internationally with first place finishes in distances ranging from half marathons to 50- and 100- milers. “Back in 2008, I was doing well in races and people kept asking me for advice,” he recalled. “I talked with them and next thing I knew, I was creating training plans for them and then others asked for help. I had no intention of becoming a coach, but it fell into place.”

Pilla has clients across the United States, although most live in New England. He has even had some international inquiries. “I take a good look at their running histories,” he said. “I look at their specific goals and where they want to go and see whether it is realistic.” Pilla has turned down clients whose goals he considers unattainable, such as those who want to compete in events for which there isn’t sufficient time to train. “I don’t want to waste their time and money,” he said. 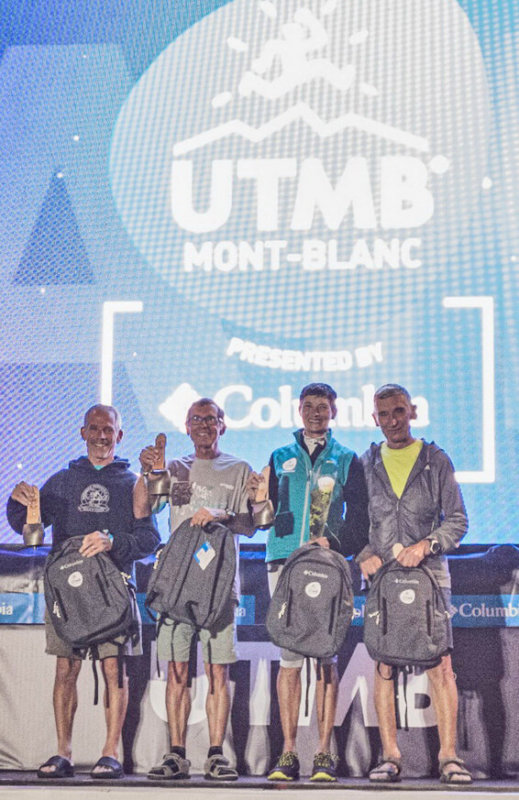 Jack Pilla, on the left, in second place on the podium at the TDS race in the Alps of Italy and France last September. The TDS race is part of the UTMB series around Mt. Blanc and is over 90 miles long with over 30,000 feet of ascent. There were over 2,000 participants. Courtesy photo.

Pilla has spent the last four years coaching running camps at Craftsbury Outdoors Center, although this year, those events have been cancelled. In 2017, a Boston-based organization called The Run Formula asked him to join their team to assist trail and Ultra runners. “I’ve been busier than ever,” he said. “The whole trail thing has just exploded.” Although Pilla thoroughly enjoys working with clients on his own, the advantage to The Run Formula is they do all the office work and billing. “They send me clients,” he said “and I create schedules and put them online. Clients upload their runs so I can see what they’re doing.” Pilla noted that many people are perfectly fine training on their own but others need him to scold them if they aren’t working hard enough or, conversely, working too hard on what should have been an easy day.

With races across the world being cancelled because of the pandemic, Pilla has been helping his runners stay motivated. “It’s been very challenging,” he said. “Usually people have a goal race, but that’s not the case this year.” To complicate matters, race directors often wait until the last minute to cancel races which makes it difficult for runners to prepare. “I want people to peak for their races,” Pilla said “but now I need to get them into maintenance mode in case something pops up.” Many runners are now focusing their attention on Fastest Known Times (FKT) on a given course, and one of Pilla’s clients is trying to set one for running the length of the Long Trail. Another of his trainees recently broke the FKT on a course in the state of Georgia.

Pilla hasn’t raced since January when he and his wife, Kristin Lundy, completed a 50K during a visit to St. Croix. The two married in 2013 and ran a 206-mile race in the Italian Alps with 158,000 feet of elevation change to celebrate. A friend is trying to schedule a race for 125 runners at Lake Dunmore in August, and Pilla is hopeful that will take place. In the meantime, he recently crewed for his wife and two of her friends as they ran a section of the Long Trail from Brandon Gap to the Beane Trail in Huntington, a distance of roughly 40 miles that they completed in 19 hours.

When the pandemic struck, Pilla’s first thought was to run some of his favorite mountain routes. But as the weather grew warmer, those trails became too crowded. “I’ve been doing a lot of local runs,” he said, noting that he hoped Charlotte will soon be able to finish the Town Link Trail to allow running from Charlotte Beach to Mt. Philo. He continues to provide his clients with feedback and hopes that in the not-too-distant future, both he and they will be able to get back to organized racing.