The undertaking of ‘Out Takes’ 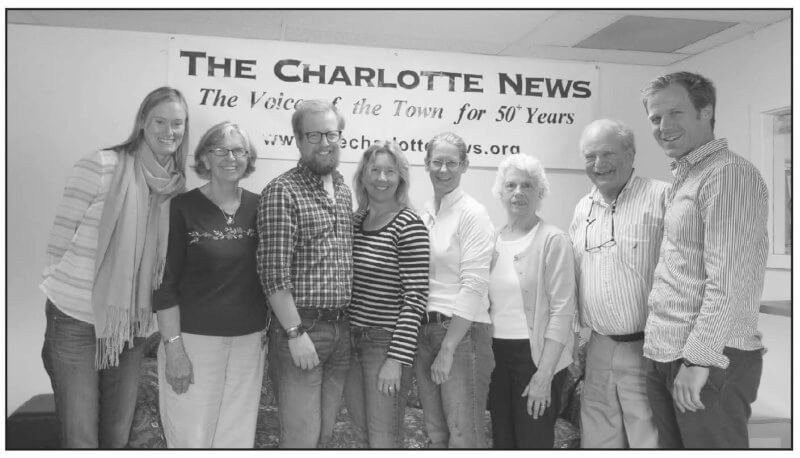 I liked Edd immediately. He had a giddy laugh; he loved Tom Waits and Bob Dylan and was happy to chip in where needed. His wandering prose challenged me as an editor in my short time at the helm of The Charlotte News but taught me an important lesson.

The challenge was in making heads or tails of some of his “Out Takes.” I over-edited them a few times, and Edd wasn’t very happy … even though I thought they made more “sense.” I realized, probably long after, that making “sense” or having a style guide isn’t the most important part of a community paper—it’s giving voice as best one can, as messy as that can be, to all the characters that make up the town. It’s the people that make the paper, not the task of making it. Edd certainly was a character and will be sorely missed.

Edd’s first official “Out Takes” was Jan. 15, 2004. In describing what he hoped to do with the monthly contribution, this line stood out to me as something Edd might have quoted before one of his own thought pieces:

“For me, I’m discovering the simple pleasure in the challenge of putting my own thoughts into words, wrestling with language until it becomes an adequate expression of an idea triggered by some kind of neural-emotive switch. I no more know how it works than I understand the intricacies of my lawn tractor’s engine, which also trips a neural-emotive switch when it won’t start.”

He delights that it only took him 60 years, but he finally found his “voice.” If only we all found our voice that soon.

Thanks for taking us along the journey, Edd. Hope that tractor works where you’re going.

A storyteller’s mark on time and place

Just remember that death is not the end. — Bob Dylan

Edd Merritt was as solid as the iron ore underneath the northern Minnesota land his ancestors settled. Bob Dylan country. Zimmie and Minnesota were subjects of several of his Out Takes columns, and they were subjects that united Edd and me (a fellow Midwesterner) when I took over as editor of The Charlotte News in 2012. In some ways, Edd was as Minnesotan as hotdish, and I immediately felt a kindred spirit in Charlotte and Vermont, two places I knew little about before taking the job. After receiving word Edd passed away recently, I again thought about Bob Dylan. I began to think of a Dylan mural on the side of a building on Fourth Street in Dinkytown, the Minneapolis neighborhood that borders the University of Minnesota. In part, it was because Dylan attended the university, and I’m about to complete a Ph.D. there. But I think it had more to do with the way Minneapolis claimed Dylan as a native son, the way he has become bound in the city’s fabric.

In my mind, Edd Merritt is similarly enmeshed in the town of Charlotte’s lore. After all, he was with the The Charlotte News for, what, 20 years? How many editors have come and gone in that time? How much has the town changed in two decades? And how many stories did he write about Charlotte and Charlotters over the years? And if newspapers are a vital record of a time and a place, how could such a storyteller not be a part of the warp and weft of a place’s fabric?

Stories. They’re what I’ll remember most about Edd. There are the stories he would tell, the way he would sit back, set his head, clear his throat, and—twinkle in his eye—unfurl one of his fantastic yarns about going to Woodstock or pushing Hemingway in a wheelchair at Mayo Clinic or when Dylan wrote a song about a kid he knew from Rochester. Sometimes his wife, Beth, would look at him as if to say, “Here he goes again …” I’d laugh because I knew she’d heard these stories thousands of times. Then he’d tell them once more in an “Out Takes” column.

And then there were the stories he’d help The Charlotte News publish. I can’t count how many times he’d come into the office with a picture of a Charlotter doing something interesting or a brief writeup of some event I didn’t know about. I often marveled at his ability to get these stories, how he seemed to know so many people, how he could move so easily between East and West Charlotte and navigate the different perspectives they embody.

But I think the best stories Edd told were through the “Around Town” feature he compiled each issue. By providing a capsule summary of Charlotters’ successes, nuptials and deaths, Edd cast a light on the triumphs and losses that mark the grand story of a small town. Edd would probably smirk at my putting his work in such lofty terms, but I can’t help it. I have romantic notions about newspapers and the people who devote themselves to telling a place’s story. People like Edd.

Regrettably, since leaving Vermont in 2016 to begin my studies, I lost contact with Edd. Still, I vowed that when I finished my Ph.D., I’d reconnect with him so that he could share my good news with Charlotters in an “Around Town” column. This would give me a chance to hear a few more stories from him. I’m heartbroken I won’t be able to hear them now.

But I also know that whenever I think about my time in Charlotte—and I do often—my memories will be inextricably linked to the pleasure of knowing and working with one of its best storytellers, Edd Merritt.

May his stories live on in The Charlotte News and beyond. There was something unique about our friend, Edd.
He had such a wonderful balance between things of the heart and the head.
His incredible memories about experiences and how they related to our generation’s songs
Could help us understand or accept other generations’ rights and wrongs.
His ever-ready smile and humor is something I’ll miss,
But there are many Charlotte News staff times that I’ll have to reminisce.
Even in most recent times when his health kept him from driving around in his truck —
No, no, that didn’t keep him mentally or emotionally stuck.
There’s no question that he will spread his aura as he is heaven-bound.
We are all so lucky to have had these years with him around!

Any day with Edd was going to be a good day

Edd Merritt was made up of a unique combination of music, beer, sports and 60s culture tied together with good humor and decency.

He was (in)famous for his puns. My favorite was Yeast of Eden, his name for the brewery he was going to start when he and Beth had their camp near Lake Eden. But he could come up with a quip for about anything. Upon reading an email from the state police about a truck carrying paper towels that had rolled over, Edd’s comment was, “That’ll make cleanup easier.”

He also had a personal story for any occasion. His Minnesota upbringing, serving in the Navy, his time in the Kingdom or New York City — it all related somehow.

More than anything, we all knew that when Edd was in the office it was going to be a good day. His cheerfulness overshadowed the many challenges we faced in putting an issue together. He could come up with a joke or pun that would make us laugh even when we’d been there for many hours. We knew that no matter what trials we were going to face in getting an issue out the door, it would also involve a lot of laughter, in addition to groans and eye rolling.

Edd was the glue that held our team together—his wife, Beth; Pati Naritomi; Linda Williamson and myself—by his wit, good humor and kindness. We have continued to “hold meetings” regularly over the past 15 years, first at the Bearded Frog and then in the Merritts’ garage-turned-club room as Edd’s health declined. We knew he was a one-of-a-kind and consider ourselves privileged to have known him.

You can read all of Edd’s “Out Takes”  and sports columns in The Charlotte News archive.

We’re a newspaper and we spell it out