Savor the good news of spring in the outdoors

Savor the good news of spring in the outdoors 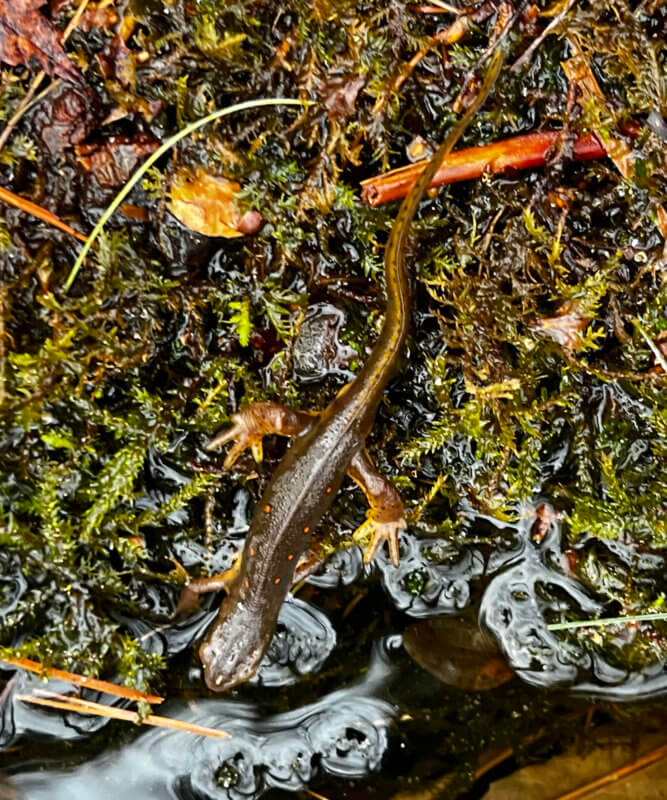 Photo by Cathy Hunter. Another sign of spring — this adult eastern newt entering a vernal pool at the Raven Ridge Natural Area. This newt is presumably going to breed and lay its eggs on stems and leaves of water plants which will hatch into larvae. Newts spend three-four months in the larvae stage before they emerge as red efts. The efts spend several years on land before returning to the water to breed.

Stop doom scrolling, please, long enough to digest some slivers of good news. Open your eyes. A tsunami of courtship and mating is underway: bees are probing crocuses and snowdrops, birdsong pierces the early hours, honking geese rustle overhead, red-winged blackbirds squawk as they establish territory. Bobcats, porcupines, skunks, squirrels, foxes, woodchucks and more are on the prowl for mates.

Spring love songs
One of the earliest indicators of spring is the duck-like song of wood frogs. In winter, wood frogs freeze solid beneath soil and leaf litter. As spring rains seep through the snowpack, the frogs thaw and then hop to a nearby vernal pool in search of a mate. Competition is fierce as males outnumber females by as much as six to one. Successful males clasp a female around the abdomen as she lays up to 2,000 eggs in the water. The male immediately fertilizes them. Sometimes a frog ball results when many suitors grasp a female simultaneously.

Vernal pool monitors across the state, including this reporter, have installed audio recorders that will document the singing of wood frogs. A project of the Vermont Center for Ecostudies, these long-term monitoring projects collect data that reveal biodiversity trends. These data are vital for science-based conservation, supporting the development of management strategies for those species and the habitat that support them.

Beavers are back
If you have visited Charlotte’s Park and Wildlife Refuge or Raven Ridge recently, you know that beavers are back. They have settled into both preserves, building dams and lodges that they call home. Nature’s engineers, beavers are industrious resources but they can also be troublesome to railroads, culverts and neighbors’ basements. Achieving balance is an ongoing dance that has played out across this country for centuries.

Nearly eliminated by hunters and trappers by the end of the 19th century, beavers have slowly re-colonized various regions of the country, sometimes with elaborate support of local agencies.

Why would that be? When they build dams, beavers slow the flow of water across the landscape. Instead of eroding deeper and narrower river beds, water slows behind dams. Resulting ponds and wetlands attract ducks, fish, birds, insects, mammals; entire ecosystems develop. Water seeps into the ground, recharging aquifers, which in Charlotte means water for our wells. Silt and pollutants settle instead of rushing into the lake. Win, win, right?

Not when culverts are clogged with sticks and mud and the buildup of water threatens roads, and near Greenbush Road, the railroad.

“We are fortunate that Junior Lewis, our road commissioner, is open to working with us,” said Julian Kulski, a volunteer at Charlotte Park and Wildlife Refuge. “We have installed beaver deceivers that prevent those high-energy rodents from clogging the culverts, allowing water to flow beneath and not undermine the roads.”

For the curious I recommend “Eager, the Surprising, Secret Life of Beavers and Why They Matter” by Ben Goldfarb, available at the Charlotte Library. You will read about successful, and not-so-successful, reintroduction schemes, beaver love hotels and how to tell the sexes apart with your nose. Also, that a pioneer in the world of beaver deceivers is a Vermonter.

Expect to see bald eagle nests near lakes and rivers, high above the water in sturdy trees. Eagles tend to be faithful to a breeding area and return to the same nest year after year, adding building material annually. These huge nests are generally 5 to 30 feet below the top of a living tree, helping to shield the young from airborne predators.

Bald eagles in our region lay eggs, usually one to three, from early March through early May, with incubation of about 35 days. Competition for food in the nest can be fierce and the youngest chick often dies. After 11 to 12 weeks, the young fledge, although their parents continue to support and teach them for several more months. Keep an eye out for them.