Photo and caption by Hank Kaestner 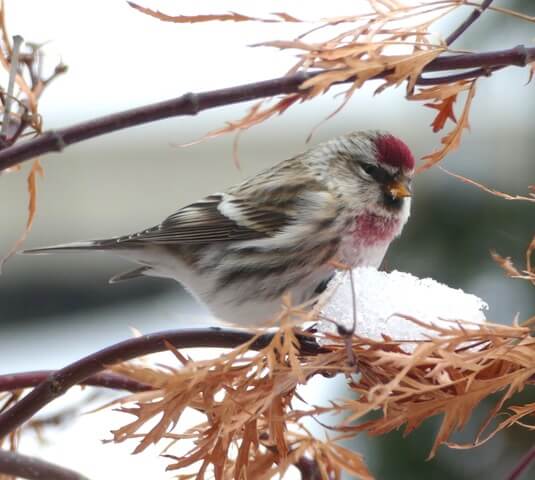 You may have seen some different birds at your feeder recently. This year is an invasion year for common redpolls. There are give northern Canada birds that, due to a shortage in food sources further north, will from time to time irrupt southward and enter the United States in large numbers. In past winters we have seen invasions of snowy owls (there are some in Vermont this year but not a major invasion), bohemian waxwings, pine grosbeaks, and evening grosbeaks. This phenomenon happens every five to10 years, usually during a different year for each of the species.

The invader this winter is the common redpoll. Large flocks were first seen just before Christmas along East Thompson’s Point Road and now the redpolls are beginning to discover bird feeders (of course, they are not used to that food source in their native range in the tundra of Canada). This photo is of a male common redpoll sharing the feeder with a winter-plumaged American goldfinch. Redpolls are very closely related to goldfinches. Whereas goldfinches, and almost all other species of birds, are found only on one continent or the other, redpolls are breed across the globe in the arctic regions of North America, Europe and Asia. In 1852 they were introduced to New Zealand, and now are a common bird there. 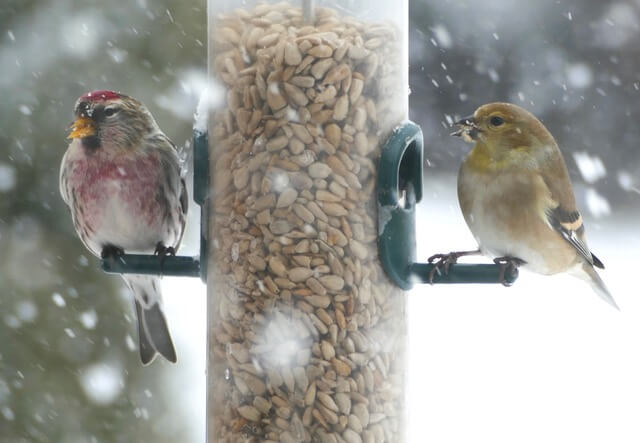 With COVID-19 keeping so many of us at home, bird feeders have become a constant source of pleasure, as we can watch from our windows as our feathered friends come for a meal.