The Jerusalem artichoke: An unsung hero

The Jerusalem artichoke: An unsung hero

In the fall of 1621, the colonists joined the Wampanoags to partake in a thanksgiving celebration of the harvest. Historians believe that they shared cabbage, carrots and parsnips from their home gardens and native plants such as walnuts, chestnuts, Concord grapes, cranberries, garlic and an unsung hero, the Jerusalem artichoke. 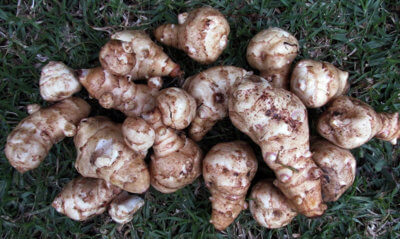 The Jerusalem artichoke, a hardy herbaceous perennial native to North America, produces edible tubers that are low in carbohydrates and high in potassium and inulin. Photo by Beverly Buckley/Pixabay.

Contrary to its name, the Jerusalem artichoke (Helianthus tuberosus) did not originate in Jerusalem. Instead, it is a North American native with a captivating history.

In 1605, Native Americans introduced a root vegetable they called “sunroot” to the French explorer Samuel de Champlain. Its taste reminded him of artichokes. Champlain, in turn, sent this new vegetable to France, where it became prized. The French named them topinambours after the Topinambà, a Brazilian tribe, which was visiting the Royal Court around the same time that they were introduced. Later, when sunroots arrived in Italy, they were identified as girasole, or “sunflower” in Italian, due to their large yellow blooms.

A mispronunciation of the name by English speakers led to girasole becoming “Jerusalem.” It was through this interesting sequence of events that this vegetable became known as the Jerusalem artichoke.

Today they are commonly referred to as sunchokes or sunroots. They are a hardy herbaceous perennial of the Asteraceae (sunflower) family with rhizomes (underground stems) that bear tubers (storage organs).

Consider growing some in your garden next year. They can be grown in U.S. Department of Agriculture plant hardiness zones 3-9 and prefer full sun to part shade. Tubers planted in early spring through early summer yield plants that can reach 6 to 10 feet in height that will be adorned with showy yellow flowers from August to September.

They are cultivated for their edible, knobby tubers. However, due to their aggressive growth habit, they easily can overtake the home garden and should be planted in a dedicated location. You can begin harvesting tubers after the first frost up until the ground freezes. Adding a thick layer of mulch before the frost can facilitate digging and extend harvest time.

Tubers can remain in the ground through the winter for storage and harvested the following spring when the soil is easy to work. If grown in the vegetable patch, take care to completely remove the tuberous rhizomes at the end of harvest to prevent spreading.

To harvest Jerusalem artichokes, first cut off several stems at the base of the plant with loppers. Use a shovel and dig straight down to lift a sizable clump of tubers, which look like pieces of ginger. Don›t worry about cutting tubers, as there will be plenty. They will easily come off the clump. Tubers are best fresh but can be stored for up to two weeks in a cool, dry place.

These tubers are nutritious and low in carbohydrates. They contain high levels of potassium and inulin, a starchy, soluble dietary fiber that helps maintain healthy intestinal flora and stimulates elimination. For this reason, it is recommended to eat them in small quantities.

Jerusalem artichokes have been the subject of various scientific research studies. Due to their low glycemic value and their high level of inulin, they are being studied for their health benefits in the treatment of type II diabetes and obesity. Their invasive nature and their tolerance to frost and poor soil also make them an excellent candidate as a source of biofuel such as ethanol and other chemical compounds.

Historically, Jerusalem artichokes have played an important role in hard times, notably during World War II in Europe when potatoes were in short supply. This year, consider adding a side dish of Jerusalem artichokes to your Thanksgiving table and sing praise for this vegetable.