Far from home, local Australians hold an event to help

Far from home, local Australians hold an event to help 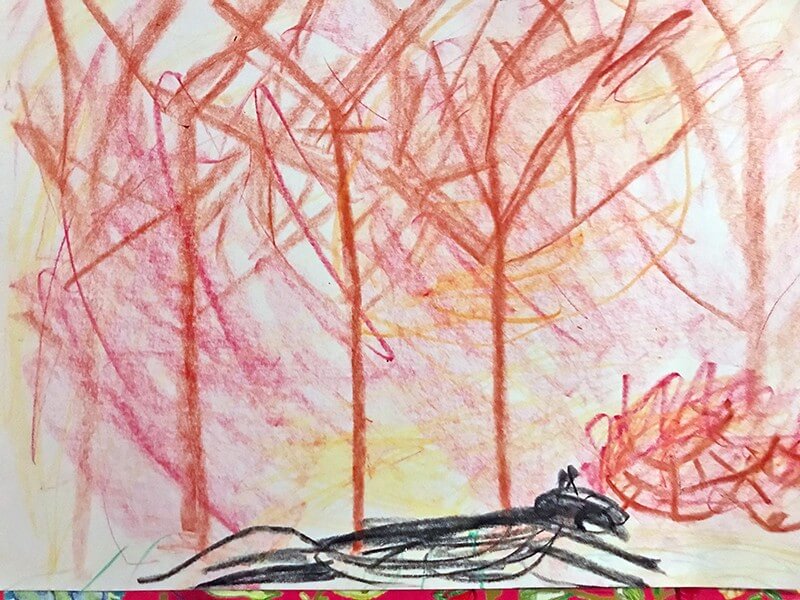 Eight-year-old Christopher Kazmier, whose mother, Dina, is from Australia, drew this picture of a kangaroo trapped in the Australian wildfires. Photo courtesy Dina Kazmier.

From across the world, Vermonters watched last fall as devastating wildfires swept across Australia. For two local Aussies, the news was particularly difficult to watch. Damien Helem, from Charlotte, and Dina Kazmier, of Shelburne, both felt the frustration of being far from home as their country went up in flames, and now they’re working to help as much as they can from so many miles away.

Kazmier said that the two friends, who are each other’s “closest Australian mate” in Vermont, have struggled as they watch their friends and family struggle from afar. “It’s very surreal,” she said. “My mom was watering her house and garden every day to prevent the soot from sticking to the dwelling—she’s an 86-year-old lady, and my sister said she was trying to keep everything damp. That image is just so surreal, because you think, I should be there watering and making sure she’s not outside with that bad air quality.”

The fires started in northern Australia, in New South Wales, where Kazmier is from. Helem is from Melbourne, in Victoria, and as the fires progressed, they moved south toward his former home, and friends of his who actually recently moved back to Australia from Vermont. He said they were right in the thick of it: “There were a lot of images you saw where people were evacuated to the beach, and people were moving up and down the beach to get away from the fires, and some were even in the water.”

Though neither Kazmier or Helem lost any family members or property, they said many they know did. Helem said seeing it all go down where you’re so far away led him to want to do anything he could to help, so he started planning a benefit to raise money for the firefighters in Victoria.

“You do feel really helpless,” he said. “You see your country on fire, and you’re sitting there on the other side of the world, in picturesque Vermont, protected from natural diasters (knock on wood); to see that happening and just the extent of it, it’s really disturbing.”
The firefighters, he said, risked everything to protect the land and people of Australia, and he hopes to give back in any way he can.

“It’s crazy how intense these fires are,” he said. “The winds can change at any moment, and it’s a wall of fire, like 50 or 60 feet. It’s intimidating how minute the firefighters are in front of these huge flames. It’s like hell.”

The strangest thing about seeing news and speaking to their families, Kazmier and Helem agreed, was the new silence brought to the landscape and their families’ backyards. It’s summer in Australia right now, and Helem said he saw a video from a friend that brought home the new reality of nature there.

“That’s one of the most beautiful things—I just have this vision of my sister’s backyard, and now there’s just silence,” Kazmier said. She said usually the kookaburras and the galahs are so loud, you can barely hear anything else, and now those birds are absent.

Kazmier and Helem are hosting a benefit this weekend to raise money for the firefighters in Victoria. On Sunday, Feb. 23, from 5:30 to 8:30 p.m., they are having a grazing dinner at The Great Northern restaurant on Pine Street in Burlington. A ticket gets two drink tickets and unlimited food provided by local chefs and restaurants including The Great Northern, Hen of the Wood, Penny Cluse, Honey Road, Juniper, Butch & Babe’s, Charlotte chef Matt Jennings, and Molly Stevens. Drinks are provided by Zero Gravity, Foam Brewers, and Mad River Distillers. There will also be a silent auction.

Tickets are available at EventBrite.