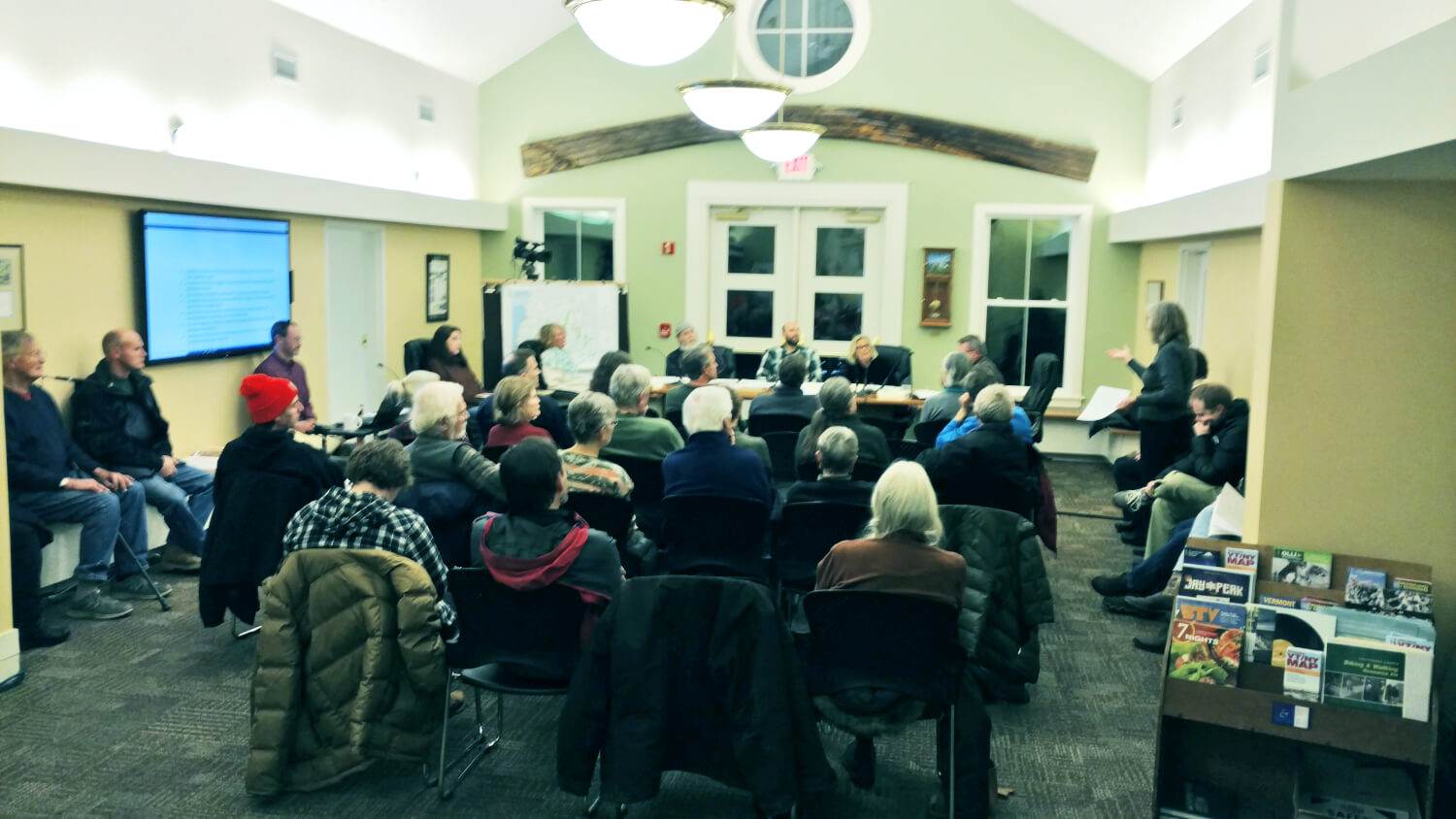 The theme of the Monday, January 10 Selectboard meeting was listening. The board heard from the Recreation Commission and Director regarding roles and from the Energy Committee on the proposed net metering agreement with Green Lantern Solar. Members of the public pressed the board to commit to a new net metering request for proposal (see separate article), which the board motioned and approved to have ready for their next meeting. The joint meeting with the Recreation Commission and the Recreation Director, Nicole Conley, was regarding respective roles of each party. The board moved no closer to a determining the roles, rather hearing from several members about the lack of communication between the commission and the director. Selectboard Chair Matt Krasnow framed the discussion as a way “to adapt the roles of the commission and the director, how to improve the commission experience, and find out the priorities.” He asked, “What are the fun parts…that you want to spend more time focusing on?”

Rec Commission member Craig Reynolds said he’d like to have more interaction with the Rec Director, a sentiment shared by several other members of the commission. Rec Commission Chair Bill Fraser-Harris said the roles and job description of the Rec Director was created without commission input. He also said that though Conley is in charge of hiring of beach attendants,“In the past, the Rec Commission has been part of the review and hiring process.” Rich Ahrens, who is also a member of the commission, said, “Our relationship is very blurry. I don’t think there is any clarity on our part on what the director’s responsibilities are and how we relate to the director.”

Krasnow responded that he, Conley, and Fraser-Harris have spent time trying to define the roles and responsibilities of the Rec Commission. “There is some charge to the commission,” he said, “and what the commission is supposed to be doing – but most of it historical.” He suggested moving forward by developing a mission statement and asked the members to identify what they enjoy doing the most as members of the commission. During the discussion, Conley explained her role as director, including her recent work negotiating and lowering the CCS school facility usage fee levied by the district, and the move to online registration for rec programs. She said several commissioners have come to speak to her directly, despite the fact, she said, that “There is a misconception going on here that people aren’t communicating with me.” She continued, “It’s important to know there is a level of disrespect going on here that no one seems to discuss. I thought the point was not to talk about what the rec director isn’t doing, but how we can work together to make this a good unit… I am not thinking this is the case.” Krasnow said the Selectboard created the director’s job description, and reiterated that the meeting was “to find a way to have a better working relationship with a commission with an undefined mission with a director that has a clear job description.” At the end of the discussion Fraser-Harris said, “We’d like to make it fun again, for all concerned.”

Other Business
The Selectboard motioned and approved RFPs for mowing and maintenance of cemeteries and town lands. Previous contractors Adam Danschler and Vanessa and Dale Knowles attended and provided input on the RFPs, including providing clarity on the scopes of work and timelines. The board appointed Fritz Tegatz as volunteer Clerk of the Works for the Charlotte library addition, approved a license agreement for utilities crossing under town highway for Jonathan and Erika Bearman at 1576 Lake Road. The Selectboard also interviewed and appointed Willie Tobin to the Conservation Commission for a term ending April 30, 2023. Krasnow updated the board on the CSVD agreement regarding security during elections at CCS, including a meeting with members from the district, Tegatz and Town Treasurer Mary Mead. He said they would circulate an updated draft of the agreement that reflect the concerns of the board and “are working to come up with a communication model that works.”

The next Selectboard meeting is Monday, February 17 at 6:00 p.m.