Down the road apiece in Ferrisburg, ducks and rice grow in harmony. Boundbrook Farm sits at a low point where run-off collects. Along its route to Lewis Creek, the water floods rice paddies, leaving the farm with less phosphorus than when it arrived. “I’ve figured out how to monetize phosphorous,” farmer Erik Andrus says of the pollutant that bedevils Lake Champlain. “I turn it into rice!” By the way, Boundbrook Farm’s Japanese short-grain rice is delicious (vermontrice.net).

Andrus grows rice and, as a by-product, produces paddy ducks. Slow-growing rice plants must compete with fast-growing weeds so, rather than using herbicides or back-breaking human labor, Andrus releases about 600 ducklings in June to feast on the weeds. With small bodies and big appetites, the flock consumes or tramples weeds without damaging the rice seedlings, which they don’t eat because the leaves contain abrasive silica. Meanwhile, duck droppings fertilize the crop. After six to eight weeks in the paddies, rice grains develop, and the ducks are removed.

Before the ducks are “deployed,” to use Andrus’ preferred term, there are many steps in both nursery and field preparations. The frost-protected, irrigated nursery houses trays of rice seedings, started in April, about 260 square feet of seedlings for each acre of paddy. Paddies are inspected for damage and the bottom prepared to host the three-leaved plants in May.

In this year of abundant rainfall, 13 paddies stretch across six acres irrigated from a reservoir that collects run-off.  Boundbrook Farm’s bottomland clay soil would be familiar to many Charlotters, forming what Andrus dubs “Addison County snowshoes.”

Slow-growing rice plants must compete with fast-growing weeds so, rather than using herbicides or back-breaking human labor, Andrus releases about 600 ducklings in June to feast on the weeds. 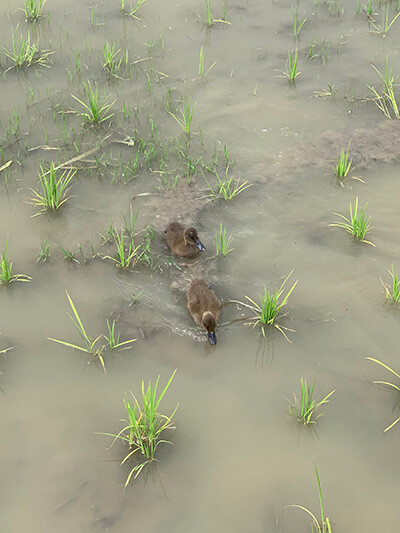 On a mid-June afternoon Andrus is up to his knees in sucking mud as he pokes in a few last transplants. Hands dripping muddy water, he motions across the broad expanse of paddies. “You might wonder why I’m obsessing about this little corner when I’ve got six acres planted in rice. The planting machine missed a few spots; this is the first paddy I see each morning, so I want it to look great!”

Lucy and Katy, two Middlebury College students interning in the muck this summer through the Food Works program, push their arms deep into the brown water to fill in missing rows of rice. “Should we pull out any weeds we find?” Katy asks.

“Yes,” Andrus says. “Make your hands be a duck and scour around the plants.”

Andrus is trying something new this year to keep the ducklings safe at night. He gestures to two large wire mesh cages atop farm wagons and introduces his bateaux, Le Vengeur and La Ville de Paris, each with an engraved wooden plaque bearing its name. “Le Vengeur and La Ville de Paris were French battleships in the Napoleonic Wars,” Andrus explains, pointing out the similarity in shape to sailing warships.

Andrus’ French accent is impressive. Without thinking I reply, “Dis donc,” loosely translating to, my goodness. Katy chimes in, also in French, as does Lucy. Each has just returned from a Middlebury College semester abroad, one in Paris and the other in Cameroon. For the next five minutes Andrus speaks in French about this year’s flock of ducks. My notes are a scramble of French and English: Khaki Canvasbacks…plus petits…. plus grands….les canetons blancs….Muscovy…experimentale…

Years ago, Andrus participated in an agricultural training, or stage, in southwestern France, learning to grow and mill wheat—and to speak French!

Brown and yellow ducklings paddle between the bright green plants. In past years Andrus used only Khaki Canvasbacks, but this year he is experimenting with Muscovy ducks for the first time. “The Khaki Canvasbacks don’t get very big, so I end up selling them dressed at between two and three pounds. Muscovies are sought for their meat and grow bigger. We’ll see how they do in the paddies.”

Back to English, “When I bought this land my goal was to grow grain for my community, but the heavy clay and numerous wet spells made for some difficult years.” Andrus never made a profit growing wheat. Yet he remembered, from a time when he lived in Japan, that rice grows in temperate climates. Fortuitously, in 2010, he attended a NOFA-VT (Northeast Organic Farming Association of Vermont) workshop where Japanese farmers presented results of rice trials done in Westminster West, Vermont. After experimenting with a pilot plot, Andrus converted some fields into paddies. This is the 10th season that he has been growing rice.

Assistant Professor Joshua Faulkner, in the Farming and Climate Change Program at the UVM Extension Center for Sustainable Agriculture, has data on phosphorous reduction at Boundbrook Farm. “With just one year of data it’s hard to make broad statements,” Faulkner says. “Even so, in the year we measured, the rice plants were storing significant amounts of phosphorous in the soil. Much more phosphorous was entering the farming system than was leaving, and that was in a dry year. It would be interesting to do the same analysis in a wet year, like this one.”

Andrus has taught himself to speak Japanese. “Most of the people I interact with are not English speakers. In fact, in just three weeks I am giving a talk, in Japanese, at a conference. I’d better start practicing!”

Andrus is indeed providing grain to his community and improving water quality in the process. “Now that I’ve found my grain I want to continue to grow and learn and teach others that this is a crop that can be successfully grown in Vermont.”