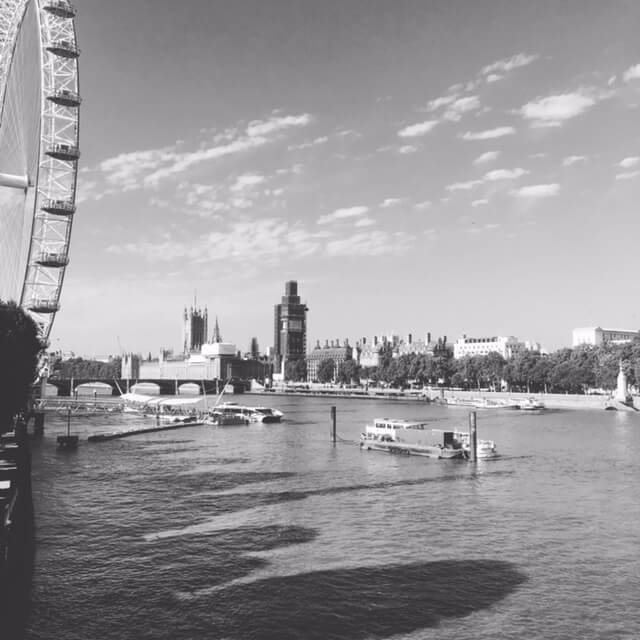 The scene on the Thames River. Photo by Katherine Arthaud

I just returned from a week in London where I visited my daughter, who had a summer internship there. We got around quite a bit in seven days: saw two plays, went to the Tate, the National Gallery, took a boat trip up the Thames and, a few days later, a train out to Brighton Beach, which doesn’t have sand but, rather, small round stones. After dinner the first night, we strolled along a still green canal, where we happened upon a floating used bookshop with a rather eccentric, ruddy-cheeked proprietor, who I believe was wearing a top hat. (Am I dreaming this?)

I didn’t buy any books that evening, but my daughter’s friend did. She got Slapstick by Kurt Vonnegut and said, upon finishing it, that she would highly recommend it. I almost took it on the plane with me but opted for Ann Tyler’s newest, Clock Dance, instead. 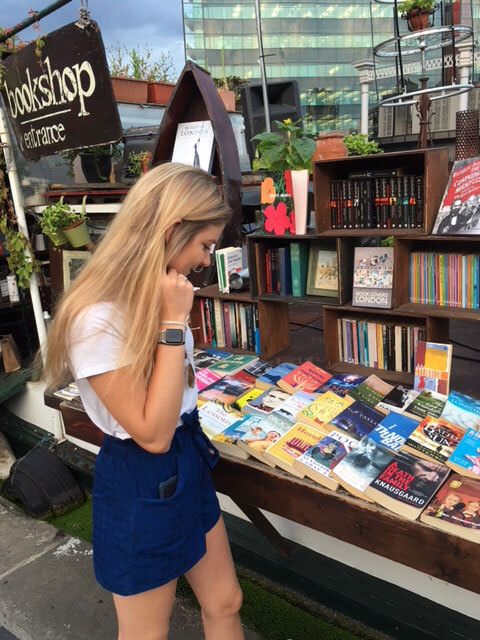 But before I talk about Clock Dance, the main reason I bring up London is that as I walked along the city streets—through Covent Garden and Regent Square…along the Thames—I found myself thinking of an earlier trip to London back when I was 11 or 12 years old, traveling with my parents and two sisters. But I wasn’t so much thinking about my family this time around as I was thinking about the book I was reading back on that trip, Oliver Twist. Back in London this July, I found myself remembering that book and how much it haunted and affected me that first time I read it, and realized that there are echoes of that haunting still.

I remembered reading it in the flickering, uncertain light of the Tube, rattling through dark tunnels beneath the city. I remembered reading it in my bed at night at the Browns Hotel where we stayed. And this time around, I found that, for me, the city is still subtly tinted or underlaid by my memories of Oliver Twist, filtered through a child’s lens, enriched and darkened by it, like one of those paintings underneath a painting. I found myself thinking, as I walked around with my daughter and her friend, of Fagin—miser,  “receiver of stolen goods,” sinister mentor of lost children. I thought of Fagin’s secret, seedy lair, and of Nancy, one of Fagin’s pupils, all grown up and wrapped up in the scary Bill Sikes, who had a violent temper and a dog named Bull’s-Eye, who one could almost pity if he weren’t so much like his owner.

Even as a child, I picked up that there was something dark and layered about this novel, and this time in London, even all these years later, despite the sun, the joy and the blue skies, there were still rich echoes of the book for me in the bustling streets and along the Thames and all over the city. Again, haunting is the best word for its affect on me. Then, and still.

So, Clock Dance is the book I brought back with me on the airplane and which I read voraciously and finished somewhere over the Atlantic well before landing. I remember once hearing that no one can play guitar like James Taylor, no matter how much they study, how much they try. I think I would say the same about Ann Tyler and writing. What is it about her? Her prose is so simple and magic, luminous and utterly unique.

Clock Dance is about a woman’s life, broken up (more or less) into decades. Willa Drake, the heroine, lost her mother young and has gotten into the habit of living a life largely determined by other people. Despite her agreeable and unassuming presence in her own life, there are these quite unpredictable, unusual things that happen to her and some quirky plot twists that occur. I found this book to be delightful and so beautifully written. I couldn’t have picked a better companion for my long trip home. Nobody writes like Ann Tyler. And by the way, if you have never read Vinegar Girl, I recommend you try it also. I actually listened to it a few years ago. It is based on Shakespeare’s Taming of the Shrew, but I don’t think I was aware of that until recently. Vinegar Girl is sweet, funny, charming—a romantic comedy, really. Excellent. And I loved the audible version narrated by Kirsten Potter.

On a very different note, another book that kept me company during my trip was My Year of Rest and Relaxation by Otessa Moshfegh. I mentioned Eileen, Moshfegh’s debut novel, a few weeks ago. Eileen was wonderful, and weird, funny, surprising and dark. My Year of Rest and Relaxation is almost more bizarre, also dark, also, strangely and unexpectedly, sickly funny. I really, really liked it.

The narrator seems on the surface to have it all. Young, thin, attractive, a graduate of Columbia, she has landed herself a job in a hip New York City gallery where she doesn’t have to do a whole lot and is actually expected to be rude and aloof. Her apartment is paid for, she has money, so what’s the problem? Well, plenty, it would seem. Or enough that she decides to spend a year sleeping as much as possible under the influence of multiple pharmaceuticals conveniently and abundantly prescribed by a psychotherapist who thinks and operates way, way outside of the box.

This book is outside of the box. And though we shouldn’t judge a book by its cover, I really like this one. Check it out, but don’t stop at the cover. Very unusual, very well written, very interesting writer. In a New York Times Book Review interview, Moshfegh said, when asked what authors (past or present) she would invite to dinner, “Edith Wharton, Ralph Ellison and Charles Bukowski.” After reading two of her books, this makes perfect sense. When asked why, she answered that she would like to see how they got along and would “want to know what it’s like to be dead, and whether writing great books has earned them any merit in the afterlife.”

Another excellent book, which took me a few pages to get into since I wasn’t sure I was in the mood for another darkish book, is The Essex Serpent by Sarah Perry. This one really sucks you into a whole other world, or so it did for me. Very good read. But in the interest of time and word count, I will have to save my comments on this one til the next time.

I hope you are enjoying your summer, reading good books, and having lots of fun. Vermont is so beautiful this time of year. I don’t want summer to end. Ever. Till next time!