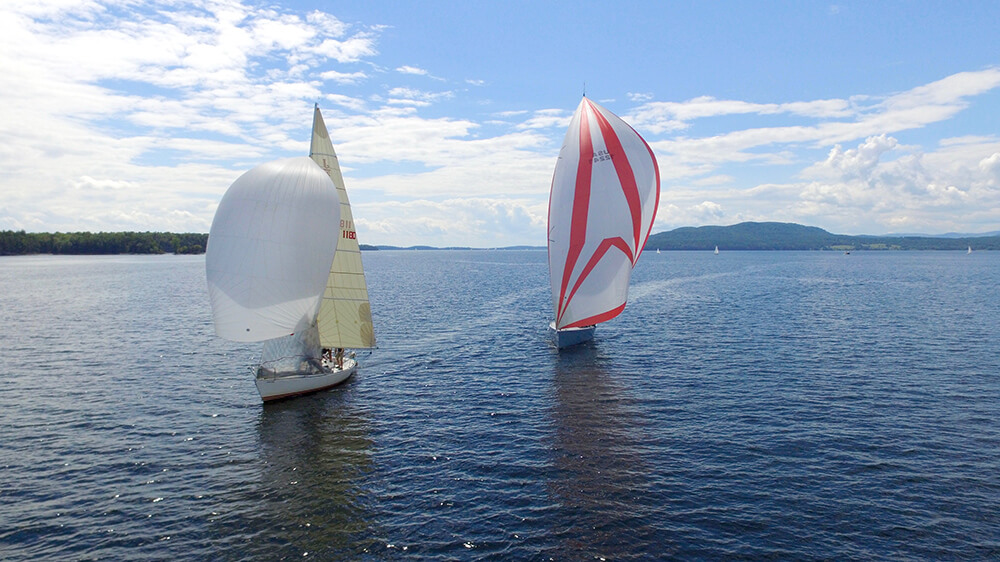 Northbound on the downwind leg during the 2017 Diamond Island Regatta, with New York’s Split Rock Mountain to the right and the Vermont shore to the left. Photos contributed

Now in its sixth season, the Diamond Island Regatta, hosted by the Royal Savage Yacht Club (RSYC) and Point Bay Marina, will for the first time be a certified Clean Regatta, helping educate and mobilize sailors to protect the world’s lakes and oceans.

The sailboat race on Aug. 18 and the annual RSYC Lobster Fest dinner, which serves as the awards ceremony, will use a sustainability plan developed with the help of Sailors for the Sea, an organization promoting ways to improve the health of the planet’s waters. RSYC will run a paperless registration system and use only post-consumer recycled paper for other purposes.

Worldwide more than 1,000 boating events have registered with Sailors for the Sea as Clean Regattas. The program unites and mobilizes sailors by offering support and resources to help conserve and protect the world’s waters.

“As sailors we have the unique opportunity and privilege to experience both the beauty and fragility of our environment,” said Wendy Friant, race director for RSYC. “By striving to be certified as a Clean Regatta, not only do we personally commit to implementing the best environmental practices, we also commit as a group to educating the public.”

Said RSYC Commodore Susan DeSimone, “The Diamond Island Regatta, including the awards ceremony and Lobster Fest dinner, will have no single-use plastic items. We’ll provide water filling stations and individual reusable water bottles, thanks to Point Bay Marina. We’ll have recycling stations, and in addition to recycling, we will also be using compostable dinnerware and utensils. These are simple changes that can make a huge difference if universally embraced.”

Point Bay Marina, the event’s co-sponsor, has been for many years a Vermont Clean Marina, meaning that it has adopted environmentally sound operating and maintenance procedures and meets a stringent set of state and federal environmental targets regarding fuel storage, waste management and pollution control.

Again this year, the event will be run as a benefit for the Lake Champlain Maritime Museum (LCMM) in Ferrisburgh. LCMM is dedicated to maritime education and the preservation and management of the lake’s historical shipwrecks and underwater cultural resources. As always, entry for the Diamond Island Regatta will be free; money will be raised instead through the sale of race-themed merchandise, including T-shirts, to sailors and racing fans, and the sale of professional photographs of the boats taking part in the race. The proceeds are used to offset an annual RSYC donation of $1,000 to the museum.

RSYC’s Diamond Island Regatta has become one of the biggest sailing regattas on the Lake Champlain summer schedule; last year, the event attracted 30 boats. The race is part of the Lake Champlain Championship Series (LCCS), a series of races featuring boats from clubs in Vermont, New York and Quebec. Regatta results will count toward both the LCCS Cannon Series and the Champlain Series. Details and registration info for the regatta can be found at the Diamond Island Regatta website. You can learn more about the LCCS at their website.

Racers are invited to a breakfast (free for RSYC members and $5 for visiting sailors) the day of the race at the RSYC tent at Point Bay Marina. Breakfast begins at 8:30 a.m., with registration from 8:30 a.m. – 9:30 a.m. and a skippers meeting at 9:30 a.m.. The race gets under way at 11:00 a.m. The awards ceremony will take place at the Lobster Fest, also under the tent, at 6:00 p.m. This year’s event will feature a presentation on Lake Champlain’s maritime history by a representative of the LCMM. Visiting sailors are invited to join the evening festivities, paying the RSYC member price for the lobster dinner.

The race is scored using the Lake Champlain PHRF ratings, which allow sailboats of all sizes and speeds to compete against one another. RSYC and Point Bay invite sailors to spend a day on beautiful Lake Champlain and experience the thrill of pitting your sailing skills against top competitors, all while helping a great cause.

The event will include separate classes for boats flying spinnakers and those using just mainsail and jib, but all boats will sail the same course, chosen from among several options on the day of the race based on the wind direction and speed. The courses, all starting in Town Farm Bay, which sits between Charlotte and Ferrisburgh, range in length from 6.6 to 13.8 nautical miles and can run from Charlotte and Essex, N.Y., in the north to Basin Harbor in the south.