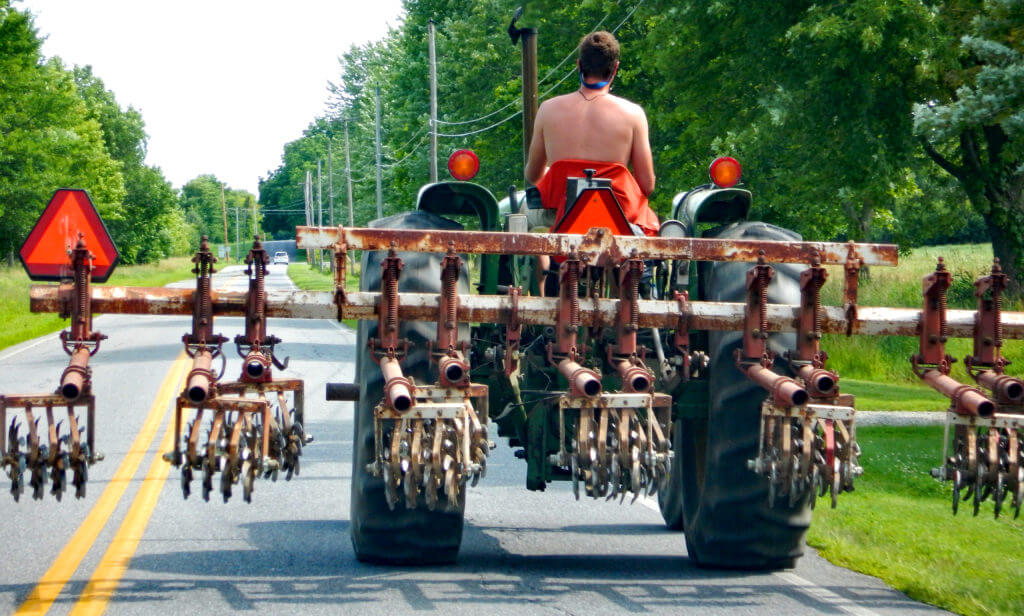 Photo of the week. On Greenbush Road. Photo by Lee Krohn.

Corrections: Judy Rowe ran a business, not a journal
In last issue’s obituary of Judy Rowe we incorrectly said that her business “North Country Journeys” was a magazine. In fact it was an organization through which Judy took women on trips all over the world, seeking outdoor adventure. She led trips down local rivers but also went as far afield as Costa Rica, Iceland, Scotland, the Grand Canyon and the Baja Peninsula. We apologize for the mistake.

We omitted mentioning Milk Money winning an award. In our July 12 Around Town we congratulated Vermont Energy Investment Corporation (VEIC) and its founders Beth Sachs and Blair Hamilton (Blair having grown up in Charlotte) for winning The Vermont Business for Social Responsibility Tony Erich Award for lifetime achievement. We failed to mention another VBSR award for small corporate members of the organization. It went to Charlotter Louisa Schbli and her company, Milk Money. Starting the company in 2015, Louisa and her partner Janice Shade opened the first registered third-party portal for administering investment campaigns in Vermont. They use the Vermont Small Business Offering exemption.

Congratulations to Tyler Allen who grew up in Charlotte and now lives in the “Big Sky Country” of Montana and who was recently promoted to Managing Editor of Outlaw Publications. The company publishes the Explore Big Sky newspaper and Mountain Outlaw magazine. Tyler has been a regular writer for the newspaper that features articles about its region of Montana. A graduate of Champlain Valley Union High School and the University of Vermont, class of 2002, he is the son of Jane and David Allen of Charlotte.

Congratulations to Nurse Practitioner Kelly (Brush) Davisson R.N. of Charlotte who received the “Emerging Leader Alumni Award” from the MGH Institute of Health Professions graduate school in Boston. Kelly is a pediatric nurse practitioner with Hagan, Rinehart and Connolly Pediatricians in Burlington. MGH Institute is a graduate school founded by Massachusetts General Hospital.

Congratulations to Marty Illick in her position as the head of the Lewis Creek Association, which, in partnership with “Keeping Track,” won the 2017 Federal Highway Administration Environmental Excellence Award for taking the lead in design and construction of two wildlife crossings of the Monkton-Vergennes Road. Designed to facilitate the safe crossing of a diverse amphibian population in this region, the crossings are working well, attracting thousands of amphibians annually as well as a number of small to medium size mammals.

Congratulations to James Hudziak, M.D. who was recognized on Vermont Public Radio for his work as Creator and Director of the University of Vermont Wellness Environment (often referred to as WE). Dr. Hudziak, a child psychiatrist, created WE to help families and children alike. He also designed The Vermont Family Based Approach, a health promotion program with the same “pillars of wellness” as WE.

Congratulations to Warren Rinehart, MD, a former Charlotte resident now living in the Residence at Otter Creek, who was featured in an article in the July 19 Seven Days for his move from medicine to metal-working. Dr. Rinehart retired from his practice as an orthopedic surgeon at UVM, where he had been for ten years. He had also had an avocation as a blacksmith and wanted that part of his life to live on. He hooked up with the Lake Champlain Maritime Museum (LCMM) that allowed him to build an 1,800-square-foot blacksmithing facility on the museum’s grounds. Half of the building serves as Dr. Rinehart’s workshop where he continues his metalworking. The writer of the article found it interesting in discovering where metal work and a maritime museum found a common link. Apparently, in the late 1980s LCMM built a forge to help in the construction of the “Philadelphia II,” a replica of an 18th-century gunboat that patrolled Lake Champlain. With that the forging began.

Sympathy is extended to family and friends of Jill Young of Charlotte who passed away July 12 at the age of 52. Her surviving family includes her husband, Brad, and their daughters Meg and Catherine. The family asks that, in lieu of flowers, donations be made to Margaret and Catherine Young at the Jill Young Memorial Fund, c/o Rhonda Forcier, 19 Loubier Drive, Essex Junction, VT 05452. These donations will be used to assist the girls in pursuing their passions and/or educational endeavors.