Quietly making noise: “The memories are fuzzy. The details are sordid.”

Quietly making noise: “The memories are fuzzy. The details are sordid.” 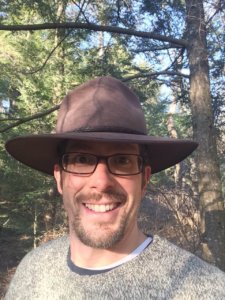 My brother, Tycen, is six years older than I am, and for obvious reasons he did not want me tagging along with him and his friends when we were growing up. One summer day, though, he had no choice, and so I found myself crawling down the middle of a cold river fully clothed and pretending to be on a military mission.

Tycen and his friend Josh had a ‘“mission” of high importance planned for the day Mom told him he had to watch me. My brother had been fascinated with the military since he was young, and in turn so was I. (Unlike me, he turned his fascination in to a 20-plus year career.) Undeterred by my presence, he told me to go get ready. I asked what the mission was, but they told me it was top secret. I went and put on my Army fatigues.

We quickly moved across the openness of the backyard to the cover of the pine forest planted by our neighbors’ ancestors years before. As quietly as two teenagers and an eight-year-old can, we moved along the hillside making our way down to the back of the neighbors’ pole barn at the edge of the forest. Here we paused to check the area for hostiles. One at a time we darted across the open lawn, jumping over the bank and sliding out of sight on a cushion of rust-colored pine needles. Once we regrouped, we proceeded the last 20 yards to the river.

Where we entered the river marked a fairly dramatic change in the landscape, and the last easy access point. Upriver the land came down gently to meet the banks, and you could see the bridge where the road crossed over. Downriver hundred-foot cliffs rose up from the water’s edge, and the left was a steep embankment, covered in stinging nettles and thorns, that led to the backyards of the houses along the road. The river was strewn with rocks ranging in size from pebbles to boulders. We waded into the cold rushing water up to our ankles, and I was briefed on what the mission was. We were going to crawl down the river approximately a half-mile to the local swimming hole, which was known as The Dam. I protested about the crawling, but only briefly. With that Tycen and Josh lay down in the water and started crawling. Luckily the river was deep enough and the current swift enough that I mainly floated using my hands to propel and at times steer me along.

We floated through a narrow tranquil pool that had a strip of sandy beach between the water and the nettles. A little farther down the river, the water moved in a tight frothing ribbon closer to the base of the cliff, then disappeared over a waterfall. We slipped out of the water and made our way along the shore to the edge of a 20-foot high horseshoe-shaped waterfall. Tycen scouted around to see if there was an easy way for me to climb down, but it was determined that that was not an option. I would have to jump.

Then he turned around and jumped off the water fall. I stood dumbfounded for a moment. Then I saw him pop out of the water and swim to the edge of the pool below. I took a deep breath and jumped.

The section of the river after the waterfall and before The Dam has faded with time. But my first trip down the rock slide into the clear pool of The Dam is one of my strongest childhood memories. The Dam was the place to swim; it was the place that you got to go when you were older. Just a short walk up the hill from the center of town, it was tucked below an abandoned house and accessed by a steep narrow trail that opened onto wide area of rock that had been formed into something akin to stadium seating. On the far side, a cliff, covered with moss and a few scraggly pine trees, rose out of the pool. The downstream section of the pool was shallow. The upstream section was eight to 10 feet deep, ringed partially by a ledge that reached four to six feet above the water.

The rock slide at The Dam is its main attraction. About a hundred feet in length it takes you from the top of a fairly steep pitch and propels you down off a waterfall into the clear pool below, where the current pushes you towards the shallows. We stood at the top of the slide, and my brother again gave me the same instructions about swimming. Then he sat down on the sun warmed rocks and eased himself into the slipstream of the river. I waited until he had swum to the shallow end, and then I sat down and slowly slid my body in to the water. I felt the current begin to take me, and then I was rocketing downward. I saw my brother on the far side of The Dam watching intently, and then I was airborne for a moment before splashing into the water, feeling the current pushing me down. I opened my eyes and looked around the underwater world. Feeling the weight of my pants and shoes pulling at my legs, I pushed towards the surface and began to kick with all my might. It seemed I had such a long way to go, but then my feet touched the rocky bottom and I turned around to look back at what I had just done.