Moby-Dick for babies: Marvel or monster

Moby-Dick for babies: Marvel or monster 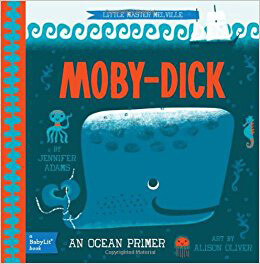 A display at the Charlotte Public Library invites parents and others who care about young children’s literacy development to take a look at the new assault on childhood—baby versions of the classics.

Cozy Classics, publishers of the baby board-book Moby Dick, claim the book “captures the essence of a literary masterpiece” and is the “perfect vehicle for early learning.” In just 12 words! A Wall Street Journal reviewer insists that this publisher has “done a service to literate families everywhere.” The infant can also settle in for War and Peace, also in just 12 words: soldier-friends-run-dance-goodbye-hug-horse-boom!-hurt-sleep-snow-love. And then move on to Emma, Jane Eyre, Les Miserables, Great Expectations and so on and so on.

BabyLit® offers Anna Karenina as a fashion primer: gown, earring, hairpins and so on. Or Romeo & Juliet: A BabyLit® Counting Primer: 1 balcony through 10 kisses. No deaths. With The Adventures of Huckleberry Finn: A Camping Primer, parents can offer infants such words as “raft,” “river” and “fishing line.”

KinderGuides is another firm set on helping parents move on from Baby Einstein into great literature. The headline of a front page article in the Business Section of The New York Times offered this summary: “Forget ‘Pat the Bunny,’ My child is reading Hemingway.” Well, not quite. KinderGuides reduces the narrative of The Old Man and the Sea, a tale specifically mentioned when Hemingway was awarded the Nobel Prize, to explanation points and editorial intrusions:

Hemingway: “The old man was gaunt with deep wrinkles in the back of his neck. Everything about him was old except his eyes and they were the same color as the sea and were cheerful and undefeated.”

KinderGuides: “The other fishermen make fun of Santiago, saying he’s forgotten how to catch fish. Hey, that’s not nice!”

Blake Edwards knew he had to make dramatic changes to Holly Golightly’s lifestyle if he wanted to get a movie version of Breakfast at Tiffany’s past the industry’s production code. As he explained to The New York Times, “We don’t say exactly what Holly’s morals are. In a sense, she can be considered an escort service for men.”

KinderGuides doesn’t try to explain to six-year-olds why Holly is paid $100 to pass on messages to the mob; instead the kinder-book devotes two pages of illustrations to Holly and the narrator wearing “funny Halloween masks around town.” Capote devotes one paragraph in an 85-page story to this event, telling the reader that Holly stole the masks at Woolworth’s.

KinderGuides omits the one detail in the novel that would amaze today’s youth with their 24/7 phones at the hip: Holly and the narrator go to a bar six, seven times a day—to make telephone calls because “during the war a private telephone was hard to come by.” Here’s a glimpse of why Capote wrote the tale and what KinderGuides does with it.

Capote: “Tiffany’s, the quietness and the proud look of it; nothing very bad could happen to you there, not with those kind men, in their nice suits and that lovely smell of silver and alligator wallets.”

Visit the library to see what happens to Jack Kerouac’s On the Road. Misspelling Morocco is the least of KinderGuides’ problems, but rest assured, they do eliminate sex, booze and drugs. Lots of exclamation points are used to indicate excitement, and when exclamation points seem insufficient, some words are magnified in size.

And to convince parents they are doing something to boost baby’s future SAT scores and ensure entrance into the Ivy League, there are quiz questions in all the books: What can you buy at Tiffany’s?

The back of every KinderGuides book proclaims. “Give your child a head start! KinderGuides aims to educate our youth on the stories and characters that have shaped our culture. Because classics are ageless. And so are their readers.”

With baby board books of classic literature selling like hotcakes, an Australian physicist is trying to tap into parent aspirations with the Baby University series: Quantum Physics for Babies (It’s never too early to become a quantum physicist!), General Relativity for Babies (accessible introduction to Albert Einstein’s theory of relativity), Rocket Science for Babies (Baby will learn the principles of lift and thrust, the forces responsible for flight). And more. Ugly little books with this pronouncement on every back cover: “Simple explanations of complex ideas for your future genius!”

Research shows the positive effects of reading to babies. But classics are not “ageless.” They are written for adults. Babies need to hear words sing; they need to see books that interest them. This means Moo, Baa, LA LA LA! and Dig Dig Digging, not Quantum Entanglement for Babies.

Visit the children’s section of our fine local library, where you will find beautiful, fun, informative books for young children, books with words that sing.