Reflections from a week at Standing Rock

Reflections from a week at Standing Rock 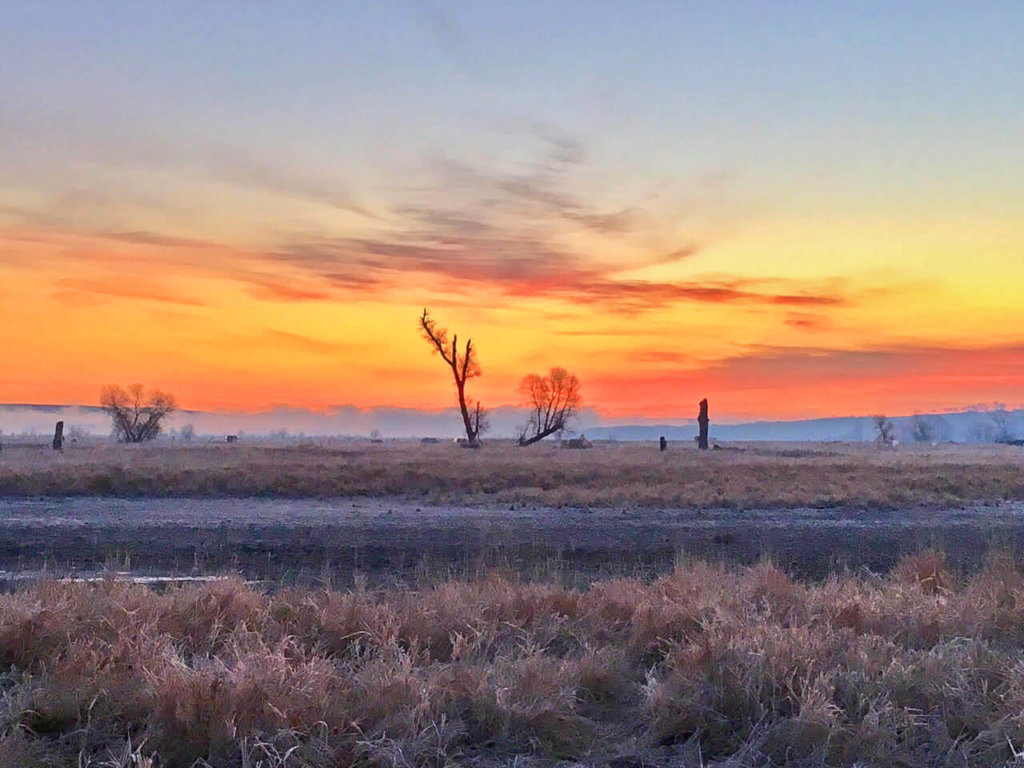 I am in the noisy, crowded, over-heated tent known as grandma’s kitchen having finished the delicious buffalo stew served to me because, as an elder, I have been seated before others. About 100 people are outside standing in line for their food. Two young boys and their mother sit on a pile of boxes and blankets next to me.

We count to 100 this way, smiling at each other the whole time.

I am completely charmed by this beautiful boy of unknown heritage, his hair long and unkempt with bits of hay in it, his clothes old and dirty. He is the calmest, most open young boy I’ve ever encountered. I’m overwhelmed by his soulful, trusting brown eyes. He seems so at home in this place…and at home within himself. He is one of the first people I met during my recent remarkable visit to the Oceti Sakowin water-protectors camp in North Dakota.

From Charlotte, I traveled 36 hours with my friend Gail and 33 other Vermonters in a bus hired by 350 VT from Montpelier to the camp near Cannonball, North Dakota. After sharing food, we crawled into our tent and fell asleep immediately to the sounds of a small plane circling above us and native drumming and chanting. Floodlights on the hill marked the route of the Dakota access pipeline.

After a few hours I was awakened by loud drumming, chanting and screaming. I felt intense tension around me but was too exhausted to investigate.

At six a.m. men on horses galloped through the camp, yelling that they needed reinforcements at the bridge. I arose quickly and joined the Vermonters who had formed a circle to discuss what was happening. There had been police brutality all night at the blockade on the bridge above the camp. It was terrifying, like being in a war zone. Was anyone willing to join the action? A few younger people were inclined to volunteer but retreated when they understood the danger.

Gail and I moved on to the sacred fire, where we joined others still in shock and learned more about the night’s violence…icy water, pepper spray and tear gas sprayed at protesters in below-freezing weather, rubber bullets and concussion grenades deployed during the night. The elders remained calm as they spoke, encouraging us not to focus on these events but instead to pray for the police because they too were people and having a hard time. Prayer would carry them through this latest atrocity.

The indigenous people shared their faith in nonviolence and in the power of the Great Spirit in such a sincere way that it became almost contagious. They offered dried sage and tobacco to the sacred fire as they sang and drummed. Elders spoke or sang accompanied by drumming. The sunrise prayer continued until the sun was well above the horizon. I was deeply moved.

Looking out over the hundreds of flags representing the many tribes who had come together for the first time to fight the pipeline, I wondered what kind of a world we live in where there is no way for native peoples to be treated with respect, a world in which they must endanger themselves to protect one of the essentials of life: water. I was grateful to be able to offer my support to their fight that benefits all of humanity.

At the orientation meeting for newcomers that followed, an elder thanked us for being there, emphasizing the importance of remaining peaceful and prayerful, reminding us not to be giving them advice. After dividing the assemblage into smaller groups, they laid out the logistics of porta potties, food, medical needs, legal aid, volunteer jobs, how to occasionally locate cell service—demonstrating that this was a well-organized town even if it looked like a shabby camp. They instructed us in the seven Lakota values that guided the protest: prayer, respect, compassion, honesty, generosity, humility and wisdom, and explained how we would best be able to serve the camp. Our role was to support the efforts of the natives as agreed upon by the elders. Yes, they were protecting the water by fighting the pipeline, but the real fight was still to achieve freedom from colonization. The depth of passion for this fight moved many of us to tears.

Once again, we ended the meeting with a prayer, words of wisdom reminding us that acting out of hope, not fear, was the way to make change.

Our final training of the day, on nonviolent direct action, began at 4 p.m. Again the leaders stressed the importance of following the guidance of the elders. If someone was running through camp yelling for people to join an action, it probably had not been planned by the elders, and we should not join. Elder-sanctioned actions were announced over the loudspeaker at the sacred fire…but not always, we discovered. Often many versions of the same story circulated, and a good deal of secrecy kept both infiltrators and police confused. Only a few leaders knew what was going to happen in advance. Avoiding all violence and staying prayerful was reiterated, but because the police were sometimes violent, leaders taught us how to clasp arms to prevent the police from breaking us up. As we practiced marching in a tight group, the leaders pretended to be police trying to push through our lines. Even as role play, this was frightening, a feeling accentuated when a medic gave us a quick lesson on how to help people who were tear-gassed or hurt.

During the days leading up to Thanksgiving there was a constant line of vehicles coming into the camp, unloading donations and then finding places to set up camps. By the weekend there were over 10,000 people there.

The story continues in the next edition of The Charlotte News.