It’s hard to believe I have read all the books now stacked on the table before me since the last time I reported to you, but it’s true. Twelve plus hours on airplanes and in airports might account for this. Here is what I have to say about four of them. 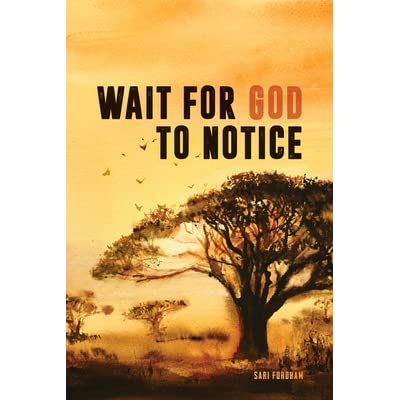 Wait for God to Notice, by Sari Fordham, is a book I never would have found on my own. A friend of mine (who happens to hail from South Africa) recommended it, and since she has never steered me wrong in the past, I picked it up as soon as I could get my hands on it. It is a memoir, whose unusual title comes from a letter the author’s mother wrote to her father on Sept. 27, 1979:

“We just found out that the price of one roll of toilet paper is $5, and its size is not enough to use a dozen times. I’ve read that the sellers rarely have bananas and beans. Wait for God to notice.”

The book chronicles the author’s years growing up in an Adventist missionary family in Uganda and Kenya. It begins with a scene in which a giant parade of driver ants marches through the author’s bedroom. She is in her bed; she is very young.

“When they turn on the light, I stir beneath the blanket. A river of ants cuts across the floor and straight to my bed. It moves up the thin quilt, journeys over the bump I create under the covers, and continues down the other side.” She continues, “My parents do not try to make connections between what has happened and what could happen. They do not see the ants as a warning, that peril can slip in through the smallest of openings, that Uganda is too dangerous, that we should pack up and leave. Nor do they see my escape as a miracle, a sign that we are supposed to be here, that we will be protected. They are not seeing metaphor or prophecy. They are too practical. The ants have given them a scare, but they do not consider them a threat; there are too many other dangers out there. My mother eases me from under the covers. As the blanket moves, the ants spread like a blooming flower. She pulls me clear and stands up straight. ‘There you are,’ she says. I blink in the sharp light.”

In this memoir, we learn about the daily life of this family living on the edge of the jungle, not far from the school where the author’s minister father teaches. We get to know the members of her family and some of what it was like to grow up in a beautiful, exotic, faraway place amidst driver ants, geckos, mosquitos, malaria, political unrest, the pulse of bat wings at night, closing hymns, near escapes, letters home, troupes of monkeys chasing each other through the trees, mambas, cobras, vipers, flowering trees, morning worship on the veranda, Idi Amin on Radio Kampala, passionfruit that looks like rotten eggs, in the embrace of a family often “innocent about how bad things had gotten, and like the ignorant often are … rewarded with dumb luck.”

Though the author’s mother worries a good deal about civil war on the horizon, military checkpoints, malaria, iron deficiency, etcetera, her father remains focused and faithfully intent upon staying: “We knew my father didn’t like making mountains out of molehills, and that relative to human history, most anything we faced was a molehill.”

This is a loving, gentle book — a view I might not otherwise have had into a life very different from the one that I know. I recommend it. Then, for a complete change of pace, I read John Grisham’s shiny new book, Sparring Partners, which I assumed was a novel. I am a big fan of Grisham, as his books always move at a fast pace and never fail to provide a page-turning escape from the world — which many have the desire these days to do some escaping from.

In “Homecoming,” we are taken back to Ford County, where we meet up again with Jack Brigance, called upon to help an old pal trying to re-enter a world he escaped from a few years earlier. “Strawberry Moon” is about a young man on death row who has only three hours before he is executed by the state. The third story, “Sparring Partners,” is about two brothers, both successful lawyers, who hate each other’s guts. Their father is in jail, and the young men collude on a plot to take over Dad’s once-prosperous firm.

If you like Grisham, you won’t be disappointed, but like me, you may be left wanting more. Not long ago, I reviewed a novel by Maggie Shipstead: Seating Arrangements. I really loved it. One of the best books I read all year. You Have a Friend in 10A (published in 2022) is a collection of short stories, each utterly unlike the others. One is about Sammy Boone, a skinny 16-year-old who gets hired as a wrangler on a Montana dude ranch — one of the most unlikely romantic heroines ever, but she catches the eye, heart and passions of her boss, and then of his nephew. Beautifully written, expertly weaving in the love and deep connection some human beings have with animals.

There are a whole bunch of good ones in this superbly crafted collection. Highly recommended.

At the end of my trip out to California to visit my eldest son, worried that I might run out of reading material on the endless flight back home, I picked up a paperback copy of John Steinbeck’s Cannery Row. It seemed the perfect read. This past year, my son has lived in Pacific Grove, where Steinbeck’s family had a weekend cottage when Steinbeck was a boy, and where the author would often retreat when he needed to write or regroup. Dylan and I had just visited the Monterey Aquarium, walked down Cannery Row and strolled along the wharf there, so, yes, I figured this novel would be just the thing.

I had read some of Steinbeck’s books in the past and had liked them all, but hadn’t, till this moment in the Monterey Airport, had a desire to revisit his work. But I will be doing a good deal of that in the future, as this short novel blew me away. I had either forgotten what a stunning writer Steinbeck is, or maybe was too young to appreciate it back in the day, but wow.

“Cannery Row in Monterey in California is a poem, a stink, a grating noise, a quality of light, a tone, a habit, a nostalgia, a dream,” it begins. “Cannery Row is the gathered and scattered, tin and iron and rust and splintered wood, chipped pavement and weedy lots and junk heaps, sardine canneries of corrugated iron, honky tonks, restaurants and whore houses, and little crowded groceries, and laboratories and flophouses. Its inhabitants are, as the man once said, ‘whores, pimps, gamblers, and sons of bitches,’ by which he meant Everybody.”

Touching, deeply empathetic, acutely observant, poignant, at times funny, at times heartbreaking … this is a wonderful book. Published in 1945, it is as alive today as the tidepools on the beaches there. Highly recommended.