Mike Dunbar has entered into a lease arrangement that has revealed the warm and fuzzy side of Robert Mack, Charlotte farmer and former selectboard member. 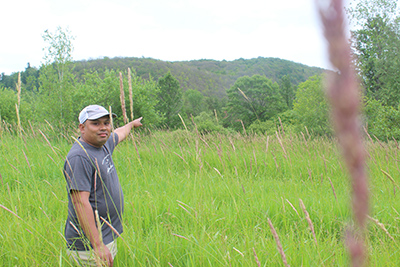 Photo by Scooter MacMillan. Ko Gyi points out where he hopes to realize his dream of raising halal meat on the former Shirley Bruce Estate.

Mack and his two partners are leasing property from Dunbar for farming on the 55 acres behind the town hall often referred to as the former Shirley Bruce Estate. The property also includes about an acre where the Charlotte Health Center had planned to build a new facility at 251 Ferry Road.

Behind an abandoned house at this address, which Dunbar said he plans to renovate into a home, there are now an assortment of farm animals, including pigs, turkeys, chickens — and goats. Dunbar developed the multi-use commercial building on Route 7 known as Charlotte Crossings that houses the Backyard Bistro, the Red Onion, the Gilded Elephant, Charlotte Work Club and Junapr, a public relations consultant group.

The goats and chickens are part of a partnership between Mack, Ko Gyi and his twin brother Ko Lay. Mack said they are calling the partnership Village Farm.

The brothers are immigrants from Myanmar by way of Thailand.

Their family is Rohingya Muslim, refugees from Myanmar which was formerly known as Burma. The persecution of the Rohingya has been decried by many international human rights organizations.

Ko Gyi said, as he walked through shoulder-high grass to 10 acres Dunbar has fenced for Village Farm, the goats and other animals will be raised and slaughtered to conform to halal, or Muslim restrictions on food. To be halal animals have to be slaughtered in a specific way and when an animal is killed for food the name of Allah needs to be invoked. Among other practices, all blood needs to be drained and organs removed.

He indicated where a barn or some type of shelter for the animals will be built. A pond is nearby which will supply water.

Just like kosher practices, no matter how pigs are slaughtered or prepared, pork is never on the halal menu. Sometimes when halal meats are not available, kosher meat can be substituted, but there are differences.

Ko Gyi, 36, said their family initially fled Myanmar after a coup when he and his brother were 4-years-old. Myanmar has been beset by coups and fighting. The family moved back and forth between the two countries several times over the years. 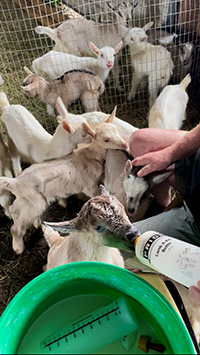 Photo by Mike Dunbar. Baby goats jockey for a position at the bottle as Robert Mack feeds them.

He and Ko Lay moved to the United States 15 years ago when they were 24. Although he liked Thailand, he said he and his family didn’t have much.

Much of his work there was tending other people’s animals, including goats, and raising vegetables. He worked hard at whatever work he could find but didn’t even have a home.

But he did have a dream. He dreamed of having his own farm animals to raise.

He and his brother now are independent vendors of sushi at Shaw’s Grocery Store in Williston.

Ko Gyi still works all the time, leaving the grocery store and coming to Charlotte to tend their animals, and often going back to work.

Lots of times he brings his family with him to help tend the animals. And share the dream.

This last Wednesday, June 22, the Village Farm had about 50 goats. But this Monday, the herd grew again, as Dunbar returned with a load of goats from Joneslan Farm in Hyde Park.

That farm got out of the dairy cow business in the spring of 2020, just before the pandemic sent already volatile milk prices dropping precipitously. According to the News and Citizen of Morristown, the brothers Steven and Brian Jones, researched switching to goat milk for several years, sold their cows and made the switch to goats at a very fortuitous time after the family farm had been in that business for over 150 years.

Mack said the Joneslan Farm has a herd of about 600 female goats, but they aren’t interested in keeping the males. So, that farm has been a source of male, or billy goats, for the Village Farm.

When asked if this is a good time for him, Ko Gyi’s face lights up. The United States and specifically Charlotte is making him very happy. He has a home in Williston, a wife and five children, and although he still works all the time, the future looks bright.

They hope to have 200 goats in two years when they will be ready for slaughter. Where they will be slaughtered is “to be determined,” Mack said.

Mack plans to return most of the rest of the 55 acres to farming of various sorts. Some will be hay and some pasture.

He remembers when the property was a farm a couple of decades ago. “I’ve cut hay there. I remember when there was corn.”

It’s time to end the conversation. Ko Gyi has to go back to work at Shaw’s again before his day is done.

Mack needs to go back to work, too. But he’ll be returning later in the evening to nurse the baby goats with a bottle.

This is where his softer side comes out.

Mack just “melts” around animals. Dunbar said, “It’s funny because he’s a tough guy. But when we get him around some baby goats, he turns to mush.”