Performing music was the life Lane Gibson knew, but in 1994 he decided to look at the industry from another perspective, going to work part time for Charles Eller at his recording studio in Charlotte.

Gibson enjoyed the job so much that he turned it into a full-time position. In 2009 he purchased the studio from Eller and renamed it Lane Gibson Recording and Mastering.

“When I took over the studio, I thought I’d do it for 10 more years and retire, but I wasn’t ready to do that,” he said. “I don’t know if I’ll ever completely retire.”

Gibson came to the studio after years in music. 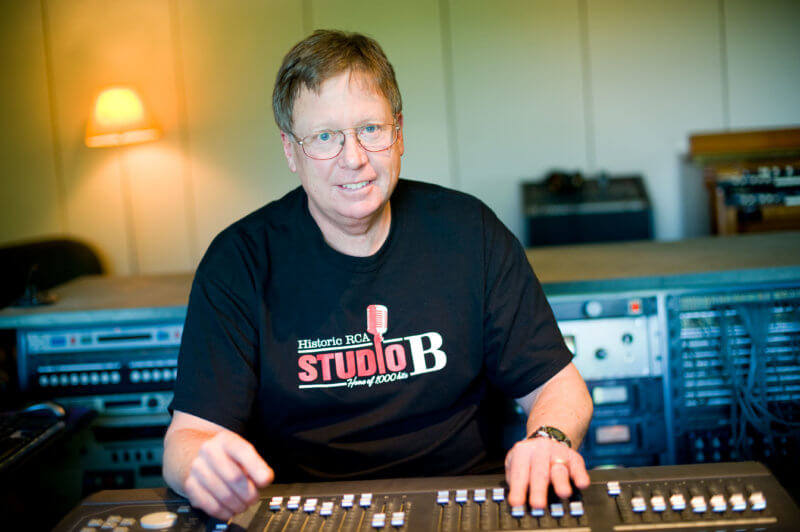 “I was the kid who got to sing solos in the school chorus,” he said. In fourth grade he started playing piano, and after briefly switching to guitar, he returned to the keyboards when he discovered there was a glut of guitarists.

Gibson toured with the Davis Brothers Garage from 1968 to 1982. The band signed with Charisma Records and recorded a hit single called “Lookin’ for Money.” Gibson later played with a local wedding and club band called Downpour.

These days, his son is the family’s active musician. “My son and I will play at family functions,” Gibson said, “and I’ll occasionally play on projects if musicians ask me.”

Gibson has worked with an array of local artists from Elisabeth von Trapp to Grace Potter. “It’s very satisfying,” he said. “To support them is really important to me.”

Gibson noted that recording time can be emotional for artists. “They really need encouragement because they are putting themselves out there,” he said. “It’s not easy. There’s a lot of emotion that goes into writing music and singing and playing and recording, and the biggest thing is the encouragement that comes from the person sitting in my chair.”

Other artists who have visited the studio include Anais Mitchell, Trey Anastasio, Jon Fishman, Rick Norcross and The All Star Ramblers, the Starline Rhythm Boys, the Vermont Jazz Ensemble, and the Vermont Symphony Orchestra.

Local artists may make up the bulk of his clientele, but Gibson has clients from across the country. He also works with a number of international artists, some of whom are referred to him by fellow Charlotte resident Jacob Edgar, who owns the Cumbancha label and is connected to Putumayo Music.

“I just did some work with artists from Israel and Africa,” Gibson said. “They don’t always come to the studio, but I do long-distance mastering and mixing. I’ve been exposed to a lot of wonderful music that I wouldn’t have otherwise had the opportunity to do.”

Gibson’s studio includes a number of keyboards, ranging from a Hammond B3 organ to a massive grand piano, as well as a wide variety of microphones, but he traces the success of the studio back to the way Eller built it in the early 1990s.

“What you’re hearing in the room needs to be accurate and not colored negatively by the acoustic space,” Gibson said. “This is probably one of the best acoustically designed control rooms around.”

He explained that there are no perpendicular or parallel surfaces.

“Everything is at correct angles to avoid standing waves and other acoustical anomalies,” he said. “Even the window glass is angled.”

Much of the equipment in the studio hasn’t changed over the years. “Technology changes,” he said, “but sound doesn’t.”

Gibson admits he’s cutting back on work a little bit. He shares the studio space with Jeremy Mendicino and Ellers, who still has some clients. Gibson and Ellers recently worked on a bluegrass album with longtime Vermont artist, Banjo Dan Lindner. “He decided to do a final record,” Gibson said. “It was great having that experience.”

Gibson said he is happy to work with a wide variety of musicians, although he prefers to stay away from heavy metal, rap and hip-hop.

Gibson’s studio has a panoramic view of Camel’s Hump which makes it easy to spend time at work.

“My philosophy for the studio is just to help people,” he said. “You have to be careful and make sure it’s about them and not about the studio or the engineer or the equipment. You’re here for them and their music. We’re still here, we’re still kicking and we’re still making music and helping people.”