When the dream started and where it led to

When the dream started and where it led to

This is a first in a series of articles by Peter Demick, who is in the process of refurbishing an old barn that lived its first 250 years in Brandon and is now being reconstructed in Shelburne. This project started with deconstruction for three weeks in October, took a pause while the foundation was created, and continued in November for the reassembly. 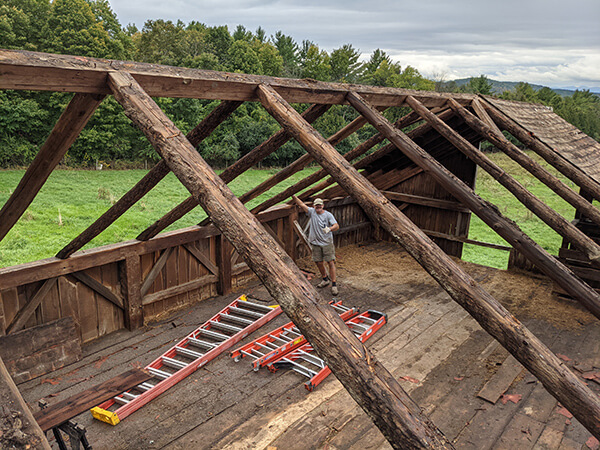 It was 1990 or so when I first thought about constructing a building for my business, Vermont Walkways and Stone Preservation. I knew what size I wanted when by chance I ran into John Hauenstein of Early Preservation, who asked me, “Have you ever considered an old barn?” to which I replied, “Why no, I haven’t.”

At the time it was John McEntee and me in the business. John Hauenstein was there for the assembly. What looked like an expensive pile of firewood was brought back to life as a late 1700s, 30-by 40-foot English barn with a 10-foot addition to the front. I was hooked. Next came the construction of a 20-by-30-foot wing from an 1840 barn. Taylor Demick on left with John McEntee on right.

Fast forward to today. We are currently assembling our 64th barn, which came from the Arnold District Road in Brandon, just across the Leicester town line, relocating it in Shelburne. This stunning little 24-by-32-foot barn has bents every five and a half feet. (Bents are the two king posts on the outer edge with a carry beam that spans the building as one piece of wood—typically 8 by10 inches.) This early barn also has a five-sided ridge beam (an eight-inch tall, five-sided stick of wood 32 feet long, with notches to receive the top rafter that is pegged into it). Most special is the 34-inch-wide roof boards that were 12 feet long. In my 30 plus years of exploring Vermont’s old barns, I had never seen boards this wide. The vertical siding boards on the north side had been protected and were the original boards with their two rose head nails. These nails were handmade on site and have a characteristic odd shape on the top. The plate, 32 feet long, holds all the bents together and overhangs the barn by two inches, so that a groove exists to receive the boards, meaning no nails were needed. The rafters sit into the plate, and the nine pair were not pegged with wooden pegs or tree nails, nor were they nailed, but, rather, sat in a five-degree pocket. This barn dates to the 1770s and was so carefully built that I suspect it was built by someone with boatbuilding experience.

After taking down the main frame, I wanted the sill plates (base of the frame that rests on the stone foundation) and floor joists for extra material, only to find they had been used before. These joists had tree pegs that once held down the floorboards before nails were used in Vermont. What a find that was! Barn rising at its new location. Photo by Pete Demick.

Now we are standing the barn is in Shelburne on the corner of Dorset and Barstow where it will live long into the future. It is amazing that this piece of history survived for so long in one place. Trees that grew in the 1500s were used to create this beautiful structure, built by hand from the virgin forests of what was to be Vermont. My crew and I got to take it apart and keep its life going.

I am humbled by the opportunity to keep Vermont barns alive. All the barns we take down in Vermont stay right here.

My goal is to save Vermont barns. They are usually in need of work, sometimes significant work. Owners typically can’t afford or don’t have the knowledge or time to repair them, much less restore them back to their glory. So my goal is to create a nonprofit to restore these barns for their owners and keep them where they originally put down, in stone and wood.

Stay tuned for next time to hear about a barn that got away from Charlotte.