The story of the tree calendar

The story of the tree calendar 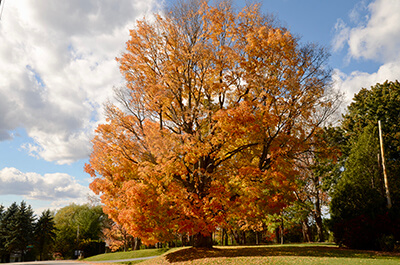 I grew up loving small trees that I could climb. Apples trees and a large, old magnolia tree that grew on my parents’ property were my favorites. On this land there were some unusual trees, such as a very large and shapely Camperdown elm and one of the few giant sequoias on the East Coast. So began for me a little love affair with trees, with me in wonder at how diverse they could be, their leaves and trunks each so different, and the spread of their branches so unique to their species. Now I want to pour over every book that exists on giant or ancient trees to learn of their size and their histories. I’d search out big trees wherever I traveled. There is, for example, an ancient yew tree in Scotland that my daughter and I once drove out of our way to see. The Fortingall Yew is said be between 2,000 and 3,000 years old. Trees of such age or of tremendous size provoke awe in me because they have known our world before we existed. They are living history.

The massive and ancient slippery elm on Thompson’s Point, the largest of its kind in the Northeast, finally died in 2016. It was said to be over 300 years old—older than our town itself! It lived, and grew, through generations of Charlotte townspeople, “watching,” as it were, the activities of Thompson’s Point as it went from a relatively solitary farm road to a full-scale seasonal community. 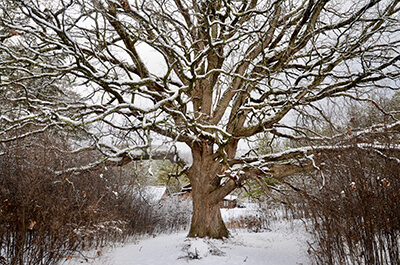 Some other trees are less well known and, in some cases, nearly invisible to the human eye because of their secret locations. A few I have seen in this town are a mystery to me—how they came to be the size they are, where some benevolent landowner must have decided against chopping it down and left it where it was, hidden in the woods or at the edge of a clearing where few can see it. In my search for big trees, I walked through cow pastures and across open fields waiting to be hayed; I tromped through woods and called many landowners seeking permission to walk their land. I confess to loving oak trees above all because of their size and utter majesty. Their trunks are massive beyond what we can comprehend, sometimes taking three or four people to encircle them with our arms outstretched. Even their enormous limbs reach out in all directions, grasping outward beyond their trunks. Many of their limbs would make handsome trees themselves! These trees are all survivors, having overcome drought and terrific windstorms, various blights and disease. They have withstood the test of time, for now.

If you are curious to see some of the giants, find my tree calendar at the following places: Charlotte Town Hall, the Charlotte Library, the Charlotte Senior Center, the Flying Pig Bookstore. Calendars are $17.95 and proceeds go to Charlotte’s Rutter Tree Fund.

The calendar itself is in commemoration of the late Larry Hamilton, Charlotte’s first tree warden, in appreciation for his long community service to this town. With Larry’s substantial knowledge of trees began a tradition that has carried over to subsequent town folk who have carried on this planting. Through the generous support of the Rutter family, whose tree fund bears its name, a sizeable number of commemorative and honoring trees have been planted to memorialize local Charlotters. Many people do not know that over 500 roadside trees have been planted by the townspeople of Charlotte. Now, if you see a tree planted in front of Town Hall, at the town wildlife refuge or along our town’s roads, it will be because of generous donations made by locals to support this tree fund.