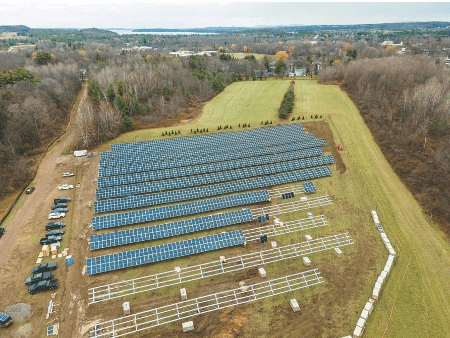 “At Shelburne Museum we see our mission as not only focused on stewarding the museum’s renowned collections, buildings and gardens, we also believe that responsibility extends to our impact on the planet,” said Shelburne Museum Director Thomas Denenberg. “This solar project is an important step in our ongoing commitment to sustainability.”

Once complete, the solar projects will generate an estimated 1,200,000 kilowatt hours of clean electricity annually. This is the carbon equivalent of powering more than 150 average New England homes and taking nearly 200 cars off the road per year. The museum will purchase the net metering credits generated by the systems at a discount, resulting in significant reductions in electricity expenses over the 25-year life of the project.

“Shelburne Museum’s sustainability commitment only furthers its stewardship mission,” said Chad Farrell, founder and CEO of Encore Renewable Energy. “We are proud to have played a role in making Shelburne Museum one of the few museums in New England to be completely solar powered.”

In addition, Encore and the museum partnered with Bee The Change, a nonprofit based in Weybridge, devoted to supporting pollinators through plantings in solar fields. The ground beneath the two sites is being planted with pollinator-friendly ground cover to support vital habitat for bees, butterflies, hummingbirds, moths and other insects critical to food security.

“We are impressed by the museum’s commitment to sustainability and stewardship,” said Michael Kiernan, co-founder of Bee The Change. “The Shelburne Museum site is perhaps the most beautiful spot we have had the opportunity to install a pollinator habitat. This habitat will be the embodiment of the museum’s mission and an opportunity to educate people about the critical importance of pollinators to the reproduction of flowering plants and all of the species who depend on their fruits and vegetable nuts and berries, including our own.”