Following open deliberations at its June 9 regular meeting, the ZBA approved John and Erika Bearman’s April 23 conditional use application for a stabilizing seawall on their property at 1576 Lake Road. According to the application, the purpose of the wall is to “prevent further soil erosion caused by wave action from Lake Champlain.”

The proposed 150-foot-long, 15-foot-tall structure will be in two sections as depicted in the site plans submitted to the board. 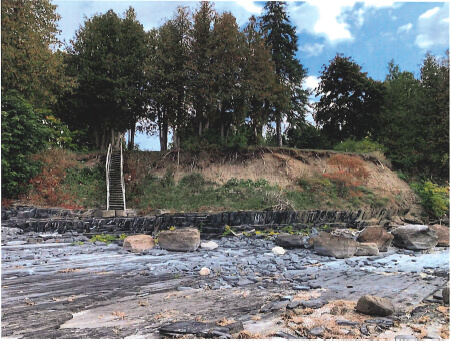 In support of the Bearman’s application, Project Manager Erich Finley of Birdseye Building Company presented the board with photos of similar walls he had worked on in the past. Also included was a list provided by landscape architect Miranda Brooks of the plant species to be planted between the two walls.

Finley said the purpose of the plants is to obscure or “break up” the view of the structures from the lake but that none of the plants listed would “necessarily” climb or drape the walls.

“Between all of the varieties [of plants] that are on there, you’re going to have an array of different depths of planting between the two walls,” he said.

Member Ronda Moore asked if there was any possibility the plants could “spread” to other areas. Finley said no.

“Nothing is invasive,” he said. “This is all harvested, it’s not a seed plant.”

All plants used at the site “except for maybe one,” are native in the sense they occur naturally in the northeast, Finley said.

Finley also reported two partially uprooted cedar trees on the property have a “50% chance” of surviving and “the hope would be that when we build the wall, we pack them in and stabilize them.”

ZBA members questioned how construction equipment would be brought down the steep hill to the site without further disturbing the grounds. A plan to create temporary steps leading to the shore had been discussed at an earlier site meeting.

“What I visualize is, they are going to disturb the bay, but the purpose is to restore it, so it has longevity,” ZBA member John David “JD” Herlihy said. “It’s going to be an improved shoreline that’s going to be more robust and strong.”

Finley presented photos from similar projects in the area, as examples of how the walls might look when completed. He said the Bearman’s wall would utilize “naturalized,” or uncut stones, because cut walls are “very expensive.”

After moving into open deliberations, the ZBA reviewed relevant land use regulations.

The board decided the restraining wall did not fall under the heading of “development.”

Member Ronda Moore suggested the applicants be required to maintain and/or replace plants at the site for a minimum of two winters after “the planting of the last plant.”

Additional restrictions discussed by the board included that any landscapes disturbed during construction must be fully restored.

The application was approved by a unanimous vote of 5-0.