About ten years ago, Julia Beerworth and her sister-in-law Anna Pepin began singing together at holiday functions. “We played for fun at home,” Beerworth said “and then we decided to try some local bars. I think our first performance was open mic at Radio Bean.” When she was younger, Beerworth had been drawn more to the songwriting aspect of music, but in college she began playing guitar and singing. When she and Pepin started playing music together, people referred to them as the Beerworth Sisters and the name stuck. Two albums later, the duo continues to enjoy recording and performing together. 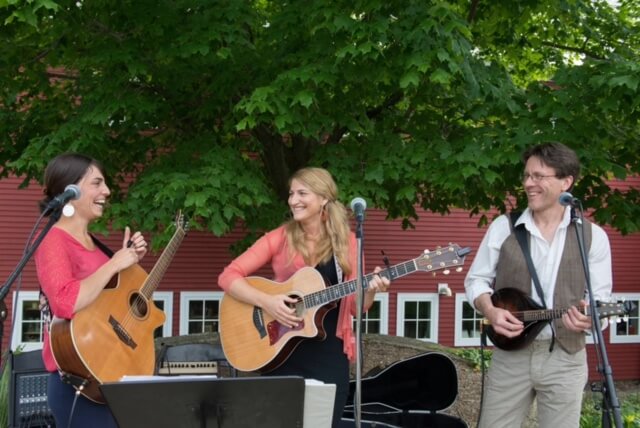 The two women have similar musical influences, including Bob Dylan, Patty Griffin, Neil Young, Iron and Wine, Mandolin Orange, and Emmy Lou Harris. “We enjoyed playing together,” Beerworth recalls “and we wrote a couple of songs together, but we’re both teachers and mothers of three so we don’t get to play that often and we don’t do a good job of promoting our music.” The duo’s first album, Simple Things, came out in 2012, and Another Year was released last year. Beerworth also has a solo album called October Blossom that was released in 2018.

The two exchange leads on their albums, but Beerworth said Pepin has more lead vocals on the second one. Both were produced by Colin McCaffrey who has a studio in Montpelier and is an instrumentalist on most of their songs. “Colin is a great friend and inspirational musician,” Beerworth said. “We’ve always loved working with him.”

The women describe their music as being influenced by their personal experiences, highlighting their roles as mothers, daughters and sisters-in-law, and referring to it as “a mix of indie-folk and country with an earthy flare.” Beerworth said that phrase is meant to convey that their music is down to earth. “We don’t put a lot of crazy background stuff in it,” she said. “It’s very simple and there’s not a lot of dress to it.”

Recently, the Beerworth Sisters’ music found a much wider audience when four of their songs were purchased by Netflix for use on the series The Ranch. Netflix became aware of the music through Beerworth’s brother-in-law, Jeff Hahn, a Shelburne-based musician, originally from Charlotte. “We had some stuff on YouTube,” Beerworth said. “It was really terrible, but they saw it and asked Jeff about us.” Netflix purchased one song from Beerworth’s solo album, two from Simple Things and one from Another Year. “That was really exciting and surprising,” Beerworth said. Their music has also been featured on Kenny Chesney’s “No Shoes” radio show. “We haven’t played out together since Covid shut everything down,” Beerworth said. “We also haven’t had that much time to get together and practice. In a way it’s been nice because we’ve talked about music together and exchanged voice memos and tried to do things in a non-traditional way.” Nevertheless, she is eagerly looking forward to the opportunity to practice and play with her sister-in-law again.

A resident of Charlotte since 2012, Beerworth has one child at the Charlotte Children’s Center and two at CVU. She used to teach at CVU and is currently finishing her third year of work at Vergennes Union High School. Beerworth has taught kids from pre-school to her current high school class. “Pre-school is the hardest level to teach,” she said. “It’s the most underpaid, but they deserve the most money. I loved it but I’m glad I’m teaching high school now.”

Although she is currently teaching a civics class, Beerworth tries her best to incorporate music into the curriculum and will be accompanying her students on guitar while they sing at the end of the year concert. Beerworth has always played music and sung to her students. “There is music playing when they enter the classroom and that helps set the mood,” she said. “I played Bob Dylan on his 80th birthday and some of them didn’t know who he was.”

Beerworth admits the connection between teaching history and making music may be tenuous but she enjoys both facets of her life. “I don’t know how they’re connected,” she said “but I know that I love making music and I love teaching kids.” The pandemic has allowed her some additional time for thought. “I have certainly had time to reflect on how precious time is, how important family and friends are, and the beauty that comes with slowing down,” Beerworth said. “These have all impacted my recent song-writing and I’m looking forward to performing out again.”