At its April 15 meeting, the Planning Commission reviewed the Smart Growth standards that the state, regions and towns across Vermont have adopted. Smart Growth principles support patterns of land development that focus housing and business in town and village centers. The principles seek to provide accessible communities with a range of affordable housing. These standards have been adopted by Charlotte and are included in the Town Plan. 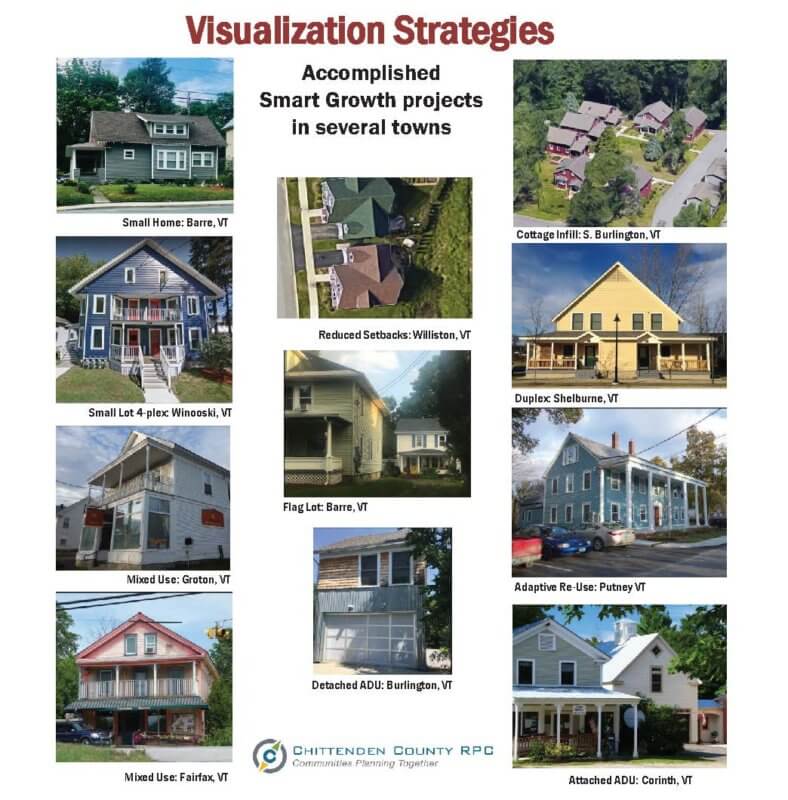 Regina Mahoney from the Chittenden County Regional Planning Commission presented a review of housing development in Charlotte from 2010 to 2019. The data show that nearly all of the housing built during that time period are single-family homes in rural areas of town. In fact, only 4% of new residences were constructed within town centers. Mahoney said, “Smart Growth is not happening in Charlotte.”

Bill Stuono observed that other towns may have public water and sewer that Charlotte does not have. The lack of municipal systems limits the ability of the town to have multiple dwellings per lot. Mahoney did offer Westford as an example. Its village has no public water or sewer, but it nonetheless passed the zoning regulations that would enable development of affordable housing in structures with four dwellings on one lot.

A discussion followed on what went wrong in the rezoning initiative in the East Village. Mahoney reviewed how other towns had gone about the process of envisioning what might be possible, presenting photos and drawings to public forums, and using feedback to perfect the design of projects. She emphasized that the process must move quickly from envisioning to implementing. In East Charlotte, a community envisioning process took place in 2010, but it was at least eight years before the rezoning process commenced. By that time many had forgotten the planning process and Smart Growth goals, and a negative publicity campaign was successful in derailing the initiative.

Marty Illick stated that she would look to the CCRPC to help Charlotte chart a pathway forward with specific recommendations. Mahoney had mentioned that the town might apply for a grant to assist in community forums. Peter Joslin stated that we are now in a brainstorming mode on how to move forward and are hampered by the fact that we are a rural town with little publicly owned land. He questioned what would be a realistic timeline.

Kelly Devine thought that Charlotte might be farther along than brainstorming the initial idea. “We had a good plan. It was presented in a manner that was difficult to understand. The ability to have renewed public conversations was limited by the pandemic. Everything was uncertain.” Devine stated that instituting a grant process requires a lot of public capacity, which is limited in Charlotte right now. Peter Richardson commented that the problem was not the plan. “This was a good plan. The problem was the lag time and the marketing of it. The opposition was successful in derailing the plan. We should not put it aside, but need to get a better grasp on a communication and education program.”

Alex Bunten, a community member, stated, “I can’t believe that you are going to re-examine a proposal that was voted down by the community 2-to-1, and jam it back on.”

Mahoney suggested that what is needed is a visualization process that links Smart Growth goals to photos and drawings of how projects will appear. A community forum would present these drawings and get feedback, and an improvement in plans would be based on feedback. Each step of implementation should be presented to the public. When this is accomplished, a speedy process should take place.

The Planning Commission will invite the Richmond town planner, Ravi Venkataraman, AICP, to a May meeting to describe Richmond’s “accordion” planning process that successfully resulted in the zoning alterations that support affordable housing.

In a separate but related issue, the commission discussed a recent initiative by the Selectboard to study the implementation of a Design Review Board. DRBs have been instituted in most Vermont towns and villages as a means of providing more efficiency in the planning and the zoning permitting process.

According to town planner Larry Lewack, the DRB simplifies the permitting process, eliminates the Zoning Board’s regulatory function, and enables the Planning Commission to devote its time to future planning. When asked if Charlotte is too small a town to implement this system, Lewack recalled his experience with the DRB in Bolton, a town smaller than Charlotte. The Bolton DRB included architects and others familiar with design review issues, and the system was implemented very successfully. Chair Peter Joslin stated that, “I know nothing about this system or who would oversee it, but I am open to learning more.” Joslin has been asked to join a three-person committee chaired by Jim Faulkner of the Selectboard to study the feasibility of implementing a Design Review Board system in Charlotte.

Contributor Nancy Richardson is the spouse of Peter Richardson, who was quoted in this article.

Planning commission navigating the twists and turns of land-use regulation

Planning wrestles with land use regulations