This story was inspired by Meg Berlin’s wonderful bobcat photo on the cover of the March 25 Charlotte News.

Some gardeners use chicken tractors to recycle kitchen scraps, help control pests, and to provide organic fertilizer. The chickens live in a house and a run, mounted on wheels or skids, and the entire set up is rotated around the garden. 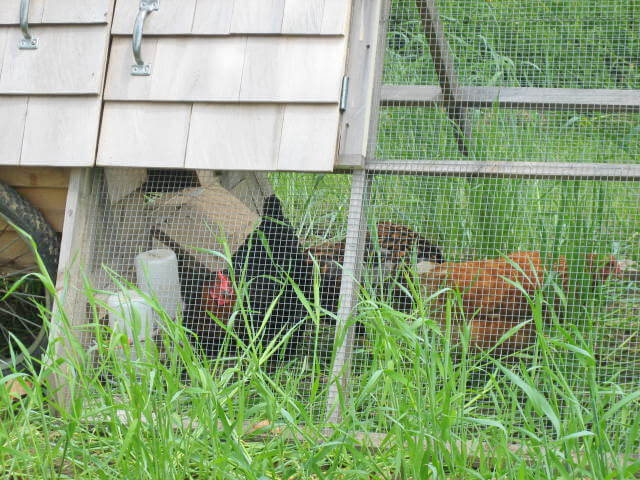 The chickens live in a house and a run, mounted on wheels or skids, and the entire set up is rotated around the garden. Photo by John Quinney.

We built our chicken tractor in August 2010, starting with an old garden cart. I cut a hole in the bottom of the cart, added a grill, nesting boxes and a shingled roof. Next came a small run, enclosed in hardware cloth and secured to the house.

We bought four young chickens and moved them in. It didn’t take long for bobcats to find the chickens.

Late one September afternoon, we noticed that the chickens had retreated into their house. That was unusual. They normally spent most of their days pecking and scratching the soil in search of insects and scraps.

Then we noticed the bobcat. It was crouched low, about 10 feet beyond the chicken tractor, eying it intensely. The chickens were quiet. The bobcat waited. So did we.

After a few minutes, a chicken walked from the house into the run. The bobcat pounced, apparently not seeing the hardware cloth that stood between bobcat and chicken. The chicken squawked and ran for the house. The bobcat bounced back off the hardware cloth, landed hard, then slowly got up and walked away, defeated.

In addition to using chickens for pest control, for many years we relied on our cat, Espresso. He was a superb hunter and kept our voles, chipmunks and mice in check. Occasionally, he got a young rabbit. But by June 2011, Espresso was unable to hunt and in obvious discomfort. We put him down and buried him in his hunting grounds.

With no cat around, we were able to put up bird feeders and attract chickadees, cardinals, juncos, grackles, woodpeckers, cedar waxwings and more. We also put up some birdhouses, looking to attract tree swallows, known to be voracious insect eaters.

This past COVID winter, I built bat houses, hoping to get some help with mosquito control, and a couple of barred owl houses, with an eye to controlling mice and vole populations. 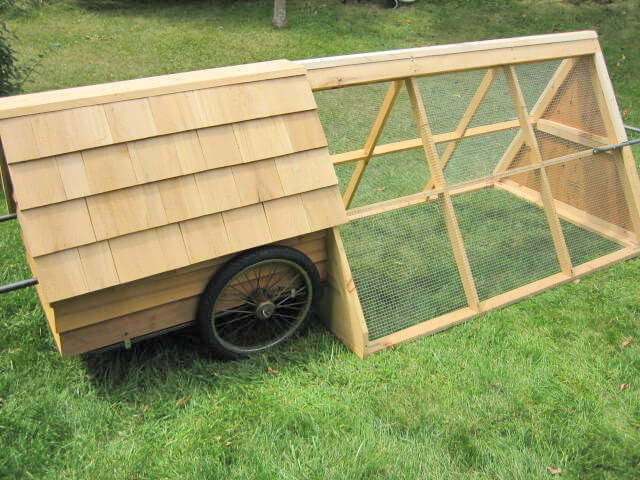 A full view of the chicken tractor.

But rabbits are still a problem. They eat young blueberry stems and find salad crops and carrots to be irresistible. We use fence, netting and row covers to keep them out, but still lose some crops.

Here’s where bobcats re-enter the story. On a Sunday morning in early March, my wife, Colleen, called out, “John, quick, come look at this.” Strolling through the garden to the west of our house, past the statue of St. Francis, we saw a fine-looking, mature, leonine bobcat ……. with a big rabbit between its jaws! Unfortunately, the cat moved away before we could get our phone cameras aimed.

This growing season, we hope to get help in managing garden pests from tree swallows, bats, barred owls, rotational plantings and beneficial insects. But until that March morning, we had never realized that bobcats were another piece of the puzzle. Just another reason that we were happy to see them.