When Rick Vincent was hired as an accountant by what was then known as the University Health Center, he wasn’t thinking much about the future. “I was a very young person at the time,” he said. “I didn’t know if I was going to stay in finance or even in the Burlington area.” Vincent did decide to stick around ,and six years ago he was promoted to Senior Vice President and Chief Financial Officer for the University of Vermont Medical Center. 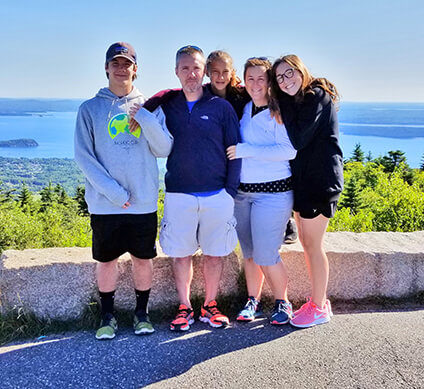 Vincent is pleased to have spent his career at the medical center. “It became much more apparent when I had my own children,” he said. “I realized how fortunate we are to have an academic medical center that sits in a rural part of the country. The fact that we have this in our backyard and can receive all these types of services without having to travel out of state made it apparent just how special this place is.”

When University Health Center merged with the Medical Center of Vermont and Fanny Allen to become Fletcher Allen, Vincent worked in accounting for the newly created organization. From there, he became a financial analyst before switching paths for a role in operations. In that capacity he worked as the director of a number of departments including pathology, anesthesiology and the cancer center. Eight years ago, he switched back and became Vice President for Finance before being promoted to his current position.

Vincent acknowledges that the pandemic has made for a difficult year at the medical center. “Early on,” he said “before we had a real sense of what might be coming our way in terms of support from the feds and state, it was quite scary.” The hospital shut down elective services, restricted in-patient access, and tried to transition to tele-medicine as much possible to keep patients safe. “Volume dropped dramatically,” he said “and we had to make some tough decisions to keep the organization afloat. It was a bad year, but it could have been much worse.”

Several years ago, Vincent joined the board of the Lake Champlain Chamber of Commerce. Referring to himself and others in UVMMC leadership roles, Vincent noted that “we do all we can to be connected to the community so we look for organizations where we can do our part to provide our expertise.” Since the Chamber is a business-oriented group, Vincent felt that his financial background might be helpful. “For what I do in my role, that obviously had an alignment,” he said. “I found the Chamber intriguing and wanted to learn more about what they do.”

Vincent has lived in Charlotte since 1999, choosing the community because he was looking for a small town with similarities to his childhood home in the Northeast Kingdom. “The Charlotte Central School was also a huge draw,” he said “because it reminded us of the small school we went to growing up.” Vincent has never looked back on his decision to build a home in Charlotte. “We love and enjoy living here,” he said. “It’s a beautiful little corner of Vermont and a wonderful place to raise our children. We’ve been extremely happy to live in this community.”

UVM Medical Center may have changed names, but Vincent is happy to have continued his career there. “It goes back to having an unbelievable appreciation for what this organization means to even just my family,” he said. “So many people have walked through the doors. My three kids were born here, my wife was treated for an illness and my parents and grandparents have been patients. The fact that I can do my part to keep it vibrant is very rewarding. It’s satisfying to know that I am playing my part in protecting and preserving this organization.”

Vincent is optimistic by nature and believes life in Vermont will improve rapidly. “We’re doing a great job of getting people vaccinated,” he said. “We’ve been really good in Vermont about keeping community prevalence low.” Vincent noted that Governor Scott and his team have been using July 1 as a key date for when things will be looking better. “I think things will start to get better fairly rapidly between now and July,” Vincent said. “Hopefully we can have a much more enjoyable summer and our kids can go back to school next fall. I’m very hopeful that things will be getting back to normal.”