I’ll meet you at deer camp

I’ll meet you at deer camp

My father was born the eighth child in a family of 10 children that subsisted from week to week on a coal miner’s solitary income. He would climb 200 feet down into a mine shaft to help his one-legged father extract enough chunks of coal to bag, walk into town and sell in order to purchase food for the evening’s dinner. He told me he swore that his children would never suffer for lack of anything. 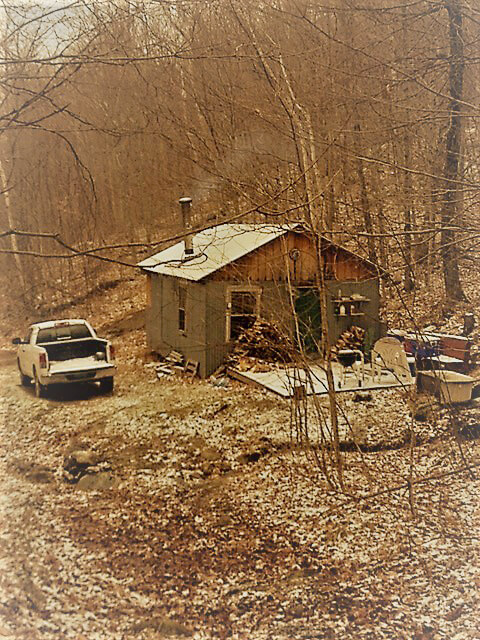 Deer camp. This was no place for kids. This place was a bastion of manhood – the old kind. And I was welcomed in as a man. Courtesy photo.

He set out on a course that took him to a small college in Alliance, Ohio and on to a career in business. He started as an insurance salesman, and within his first year he sold a million dollars’ worth of insurance (which back then was a lot of money). He quickly learned that he was a consummate salesman and began working at a used car dealership, then purchased a small diner on the college campus. From there the entrepreneurial spirit was lit.

He started working deals to purchase anything that appeared to hold a modicum of the possibility of making money. He loved making deals. By the mid-60s he had amassed a small empire of hotels, nightclubs, nursing homes and partnerships in Swiss banks, and even a racehorse that was bred to a Kentucky Derby winner. He had a private plane and pilot, a big ugly green limousine, and one of the first car phones in the back of his Oldsmobile Ninety Eight.

It would prove to be an ironic twist later in life that the value of all these things was nothing compared to what he gave us as a gentleman.

He had married the love of his life, the Homecoming Queen, my mother, who was a well-heeled matron worthy of raising children. Four of us.

He was jet-setting around the country and relied heavily on our mother to rear his progeny.

Then there came a time when his eldest son, an awkward, sensitive young lad, who failed miserably at team sports (even when his father owned the team), was in desperate need of a connection to find even the slightest vestige of traditional virility.

I was 13 years old when he sent me to a Hunters’ Education class and gave me a Marlin model .22 caliber bolt action rifle for Christmas. I studied that Hunters Ed course like it was to be my master’s thesis. I was going to be a master of my own destiny! I would learn everything I could about safety, proper etiquette, habitat, ecosystems, conservation and yes, even hunting. I practiced in the back woods of our house in Pennsylvania, stalking rabbits and squirrels once I had received my first license.

When I had exhibited enough interest in learning to master something, I was 15. I tried football and got creamed by the big dudes that they grow around Pittsburgh suburbs. I tried baseball but could not find the courage to take a swing at a ball when I was up. Basketball? Are you kidding? My seventh-grade class had kids with full beards that stood over six feet tall. It was hopeless. I was a loner. But I had found my path: the outdoors.

That year my father did something extraordinary. He planned a deer hunting trip into central Pennsylvania, where he had grown up.

I sat up late that night, polishing my new Marlin 30-30 and watching voluptuous snowflakes falling from the darkened sky and waiting for our departure. We had planned on a 2:00 a.m. start with a four hour drive. I awakened my father around midnight telling him that the snow was coming down hard and that we had better get going now before the roads became impassable.

He steered the Olds Vista Cruiser north to Interstate 80 and slid onto the slippery snowbound surface, busting through snowdrifts as if they were feather pillows. This is the first time that I saw my father as my hero. We plowed east through the night, listening to an old country radio station from Wheeling, West Virginia. My father drove with the window down so he could grab the wiper blades every few minutes and bang them against the frosted windshield to rid them of the heavy flakes. He sang along to Hank Williams, Merle Haggard and Charlie Pride–names that I didn’t know.

Six hours after we left, we pulled off the interstate and took a few back roads that I was sure would lead us closer to a tow truck. But within half an hour we plowed our way into a driveway with drifts over my waist and slammed the bow of the Vista Cruiser into a snowdrift about 20 feet from the door of an old, poorly lit log cabin.

We knocked on the door of the cabin and as it opened, pale yellow light from kerosene lanterns filled the doorway. The smell of cigar smoke, bacon, coffee and whiskey filled the night air around me. This was no place for kids. This place was a bastion of manhood – the old kind. And I was welcomed in as a man.

Now I know that by today’s standards that scene would be quickly labeled inappropriate for a young man. But society hadn’t developed into the calculating, politically correct version we have accepted today. And that is what I needed at the time. It was certainly better than getting hazed in the locker room of the high school!

The next day we stood in the woods together listening for deer. The trees were bowing down to the earth begging for mercy from the heavy snow on their boughs. Rabbits peeked out of their burrows to find a world that had miraculously been altered overnight. The sun shone brightly creating pillars of light through the branches and errant flakes drifted down from the sky with rainbow-like halos surrounding them.

And I had my father to myself for the first time.

We would get together every season after that until I went away to boarding school. Eventually, I convinced my family to move to Stowe because I’d had a vision of a white-mountain nirvana. We continued to hunt together each season until the family decided to move closer to New York City, where my father’s burgeoning investment business was demanding more and more of his time.

Decades later, my father having lost every penny of his fortune, I found myself living in Vermont and he in Connecticut. I was able to lease a small and very dilapidated deer camp in Huntington. My buddies and I fixed it up with hemlock paneling, an indoor bathroom – even a hot water shower and decorated it with random furniture found along the roadsides. It was perfect. I invited my aging father to my camp with a few of my closest friends who comprise my inner circle. We laughed, we lied, we played cards, we swore, we drank a bit and generally asserted our God-given right to misbehave a little.

My father sat in a huge blue EZ Boy chair with his feet propped up in front of the woodstove and we reminisced about how we finally found our connection all those years ago.

In the last three years of my fathers’ life, his health declined significantly and he was no longer able to make the trip north.

I drove to Connecticut to visit him in his senior home just a mile away from my youngest sister at the end of June and realized that it would likely be my goodbye. He told me that his only regret was that he didn’t leave a fortune to his kids.

To all of us he was a gentleman, a wise and adventurous soul, a remarkably compassionate and kind person who possessed a spirit that always saw the best in everyone.

But to me, he possessed the character of the kind of man that I wish to be.

I held his tender hand and whispered in his ear “I will meet you at deer camp. You remember how to get there right?” He squeezed my hand and mouthed, “Yes.”

In his eyes I saw the pale, yellow light of the doorway.

Bradley Carleton is Executive Director of Sacred Hunter, a non-profit that seeks to educate the public on the spiritual connection of man to nature and raises funds for Traditions Outdoor Mentoring, which mentors at-risk young men in outdoor pursuits.