There’s no moon. I sit in my car on the side of a back-country road, lights off, hazards clicking in the blackness, hoping someone doesn’t call the police. I care about the environment, so I don’t leave my car running, but it’s 40 degrees out. The heat slips out the windows and night sounds settle in as I sit there, shivering, waiting for my accomplices to come back. Eventually they hurtle into the car, dressed in black, the masks that protect them from the coronavirus also providing a disguise. “Go, go, go!” they shout, frantic. It’s critical: they can’t be caught. But Safety First is my motto, so I start the car and carefully pull out onto the road. I’m not the world’s worst getaway driver and this is not a burglary: I’m a mom, and I’ve gotten suckered into taking my kid ghosting.

Ghosting is easy, in theory: sneak up to a house, knock on the door, and then run, leaving no trace but a bag of candy or treats on the doorstep with a little note that says: You’ve been ghosted! 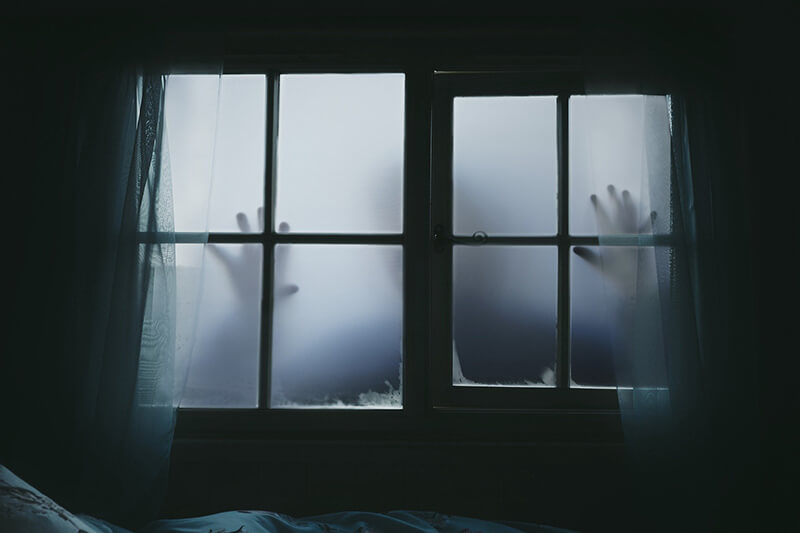 Ghosting in other towns might be a quick knock on a friend’s door, a sprint back to the car, and a one-block drive to the next friend’s house. In Charlotte, the excitement, and therefore the potential for danger and disaster, is real. The lack of streetlights, long driveways, and dirt roads can make the process exhilarating for kids and panic-attack-inducing for parents, not to mention terrifying for Charlotters who don’t have school-age kids and are wondering, Why did some creeper just pull up next to my house and turn off the car lights?

Charlotte children, as they do, have taken this custom to the next level. My 5th grader likes to put a pearl onion in with the bag of candy, just to keep things fresh. Someone once left a radish and a Band-Aid in a bag on our front porch. My oldest once included, along with candy and Halloween novelty pencils, the brochure about puberty he got from health class at school.

And it’s not just the treats themselves that are kicked up a notch—it’s the delivery. Kids dress like the guys from “Home Alone,” and the friends don’t stand on the doorstep and wave with delight when they see their treat. More often than not, it’s a pursuit straight out of a James Bond movie. They fly out of the house, sometimes with a Nerf gun in hand, hot on the heels of their ghoster, desperate to catch them. One kid we know waits in the bushes in front of his house most evenings in October, dressed in black, flashlight in hand, ready to catch anyone who dares to deliver him a small bag of Snickers.

A couple years ago, with five kids screaming at me from the back seat, in an attempt to ghost a particular family without causing a multi-car pileup or lose a kid in the ditch on the side of the road, I backed into my friend’s mailbox. I sent her a text. “Hey, just wanted you to know, I think I just nicked your mailbox.” Then two minutes later I sent her another text. “I don’t know why I lied to you, you’re going to see your mailbox on the ground and shards of my taillight all over it. I didn’t nick it. I smashed it. Sorry!” She was very sweet about it, but one gift card to Lowe’s later, I realized the true price of being a bad getaway driver.

Some families, even those who make it through October with their mailboxes intact, don’t like ghosting. I get it. Sometimes it gets late, sometimes toddlers get woken and dogs go bananas barking and kids fall in a hole in a field and sprain an ankle. But sometimes it’s really great, like when the kids are having the most fun ever, or like last night, when a friend sent me a photo of two airplane-sized bottles of Bacardi and Fireball that arrived along with the candy on her front step. “Are you my favorite ghost?” she asked. “No,” I wrote back, “but I hope that ghost came to my house, too!”