In his work, Kip Mesirow finds the sense on a molecular level

In his work, Kip Mesirow finds the sense on a molecular level

It all started with a light fixture. Kip Mesirow was living in Berkeley, California and building houses when he got a job working at Chez Panisse for the legendary chef Alice Waters. “They needed light fixtures,” he said. “So I went to the sheet metal shop with an idea, but they said they couldn’t do it because there was too much detail. I asked them to show me how to make a pattern and decided to see what I might be able to do on my own.” 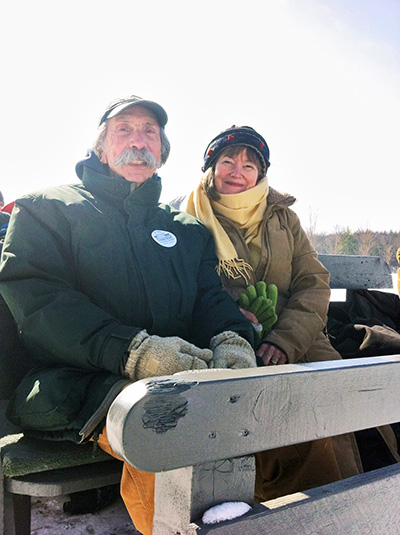 Kip and Mary Mesirow moved to Vermont from Berekeley, Ca. to be near his grandchildren. He works in copper fabrication and published a book about Japanese woodworking tools.
Courtesy photo.

Mesirow had a woodworking shop in Berkeley Hills and he bought some hand tools and began making copper pendant fixtures. “They were crude because the tools weren’t perfect,” he said, “but they had a handmade look which Alice appreciated. People started to see the fixtures and wanted to know where to get some, and one thing led to another.” Mesirow continued woodworking on the side, but in 1985 he opened Verdigris Copperworks. The name means green-gray in French but it is also an old alchemic name for copper.

Two decades ago, Mesirow’s daughter married a Vermonter. He and his wife, Mary, packed up all their belongings and had them shipped to Charlotte. “We wanted to be where the grandkids were and Berkeley was getting crowded,” he said, “so it was time to leave.” He set up a 1,700-square-foot studio with views of the Green Mountains and the Adirondacks. Mesirow continued doing woodworking, but his business mainly concentrated on copper, specifically light fixtures, lamps, sinks, fireplace fronts, hammered copper tiles and commissioned architectural details. Many of Mesirow’s customers are from the Berkeley area. “I still have architectural connections and past clients,” he said. “It’s a nice little business.”

Mesirow hurriedly returned to Berkeley the day after a fire gutted part of Chez Panisse in 2013. “I was there for a couple of weeks to supervise and do a set of drawings for the reconstruction,” he said. The renovations ended up winning a 2014 Berkeley Architectural Heritage Board Association award for restoration. “The whole restaurant is an evolution,” he said. “It was an old house. You work on one corner and another and your design sense changes from one corner to the other. It’s not continuous throughout the whole restaurant.”

Mesirow cares deeply about the tools he uses. “All my big tools are old, but there is a quality to them,” he said. “They are meant for jobs that are done by hand and that’s what gives my work its look. It’s not just punched out from Home Depot.” Mesirow is the author of a book titled “The Care and Use of Japanese Woodworking Tools: Saws, Planes, Chisels, Marking Gauges, Stones”.

“I’ve always appreciated the Japanese craftsmanship and sense of weight, balance, rhythm and texture,” he said. “There is a flavor and a feeling for that sort of thing which makes other styles look two-dimensional and flat.”

Although Mesirow has tried to hire others to help him with his business, it hasn’t panned out. “I’ve tried employees and apprentices, but it’s hard to find someone who does the work because they enjoy doing it rather than wanting to get rich off it,” he said. “You’re not going to get rich over anything done by hand.”

For Mesirow, the creative process is an intimate one. “I have a style,” he said “and to stay in that style you need a center or something that you work around. You need to satisfy the needs of the piece and be faithful to who you are.” For Mesirow, it’s all about weight, pressure, balance and rhythm. “It’s like two pieces of furniture that you can put together even though they are separate,” he said. “The space between them makes sense, almost on a molecular level.” Mesirow described his creations as being “held together by pressures and shadows and rhythm. There is a mass and a weight that fits in with the air around them,” he said.

Although Mesirow still enjoys his work, he is getting ready to retire from the copper fabrication business as well as from woodworking. “I’ve got some physical issues and things start to add up,” he said. Still, the lure of creating something continues to pull him in. “It wouldn’t take much for me to start to put something together,” he said. “You can’t buy the enjoyment of figuring out how to do that.”