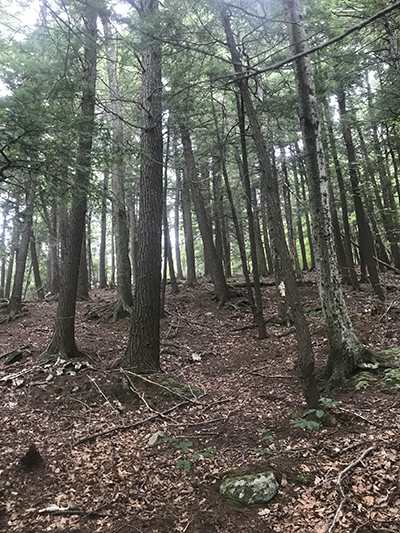 The reasons for the unique feel of hemlock forests are tolerance and persistence. Courtesy photo

Many of us have had the experience of walking through the woods when suddenly the raucous sounds and green-tinted light of a deciduous forest become dark and quiet. If this has happened to you, you have already had the unique experience of entering a hemlock forest.

Eastern hemlock (Tsuga canadensis) forests appeal to our intuitive sense of aesthetics, with a tight-knit canopy and a park-like, open understory. The reasons for the unique feel of hemlock (no relation to the Socrates-killing poison) forests—and the keys to hemlock’s survival strategy—are tolerance and persistence. Hemlock is Vermont’s most shade-tolerant tree species, capable of surviving with little to no direct sunlight. Like many of our shade-tolerant tree species, hemlock is also long-lived, capable of living 300 years and occasionally up to 600.

Most shade-tolerant trees have a simple strategy: they play a centuries-long game of tortoise-versus-hare. Slowly and persistently they establish in the forest’s understory, waiting for an opportunity to grow upwards. Outpaced by faster-growing, shorter-lived tree species, hemlocks persist in the shade as other trees decline and die over the course of decades. When they finally reach the canopy, hemlocks create dense stands where very little light reaches the forest floor, making conditions where few trees but hemlocks can survive.

Eastern hemlock’s range extends from Minnesota to Prince Edward Island and from southern Ontario and Quebec down to northern Alabama and Georgia, growing largely at higher elevations in the southern portion of its range. In Vermont, one often finds hemlock on sandy or gravelly soils, growing with red spruce and white pine, or on swampy soils with a high water table, alongside red maple and yellow birch. Their ability to grow on the steep slopes of river-side ravines, stabilizing soils and shading streams, make them an invaluable species for protecting water quality and aquatic habitat.

Hemlock stands provide important habitat for some of our wildlife, most notably white-tailed deer. Because of their tight-knit canopies, hemlock stands tend to be warmer and have less snow than other forest types. For this reason, hemlock forests often function as deer wintering areas or deer yards, areas where deer congregate in the winter and which are critical to their survival.

Growing and regenerating hemlock is notoriously difficult. Like yellow birch, their seeds struggle to germinate except where soils that have been scarified—where the top few inches have been scuffed up—or on rotting wood. For this reason (also like yellow birch), managing for hemlock in the summertime, and allowing some scarification to occur, can improve their chances of regenerating. Hemlocks are slow-growing and out-competed by other species in the open, so creating tiny gaps in the canopy, from a single tree to 1/8 of an acre, will also encourage them. Leaving lots of dead wood on the forest floor following forest management can also provide seedbeds for future generations of hemlock.

Hemlock wood is notoriously fickle, heavy and hard to work, and less valuable than other softwoods like white pine and spruce, but is increasingly being utilized as lower-cost building material. While it is stronger and harder than these other softwoods, it isn’t truly rot-resistant—although many have touted it as such. Historically, hemlock bark, with its high tannic acid content, was the most valuable product that the species provided, used in the leather-making process by tanneries.

Like our ash trees, hemlock is under threat from an introduced (exotic) forest pest. The hemlock wooly adelgid (HWA) has wiped out hemlock forests throughout the Appalachians. This pest is in Vermont, established in Windham and southern Windsor counties, and presents an existential threat to our hemlock forests. While populations of this pest seem limited by Vermont’s winters, we expect HWA to spread as our climate changes. It could also be easily introduced to other parts of the state by transportation of hemlock, so consult with state guidelines before moving hemlock material anywhere. The loss of Vermont’s hemlock forests would be devastating not just to this species, but to all the other species that rely this unique tree species.

Learn more about HWA, and how to manage in light of it.