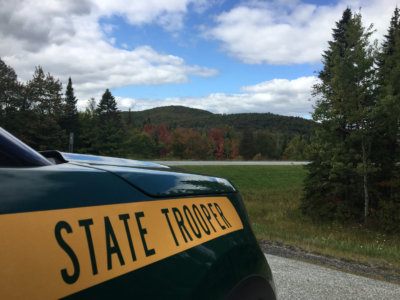 The fatal accident last week at the intersection of Route 7/Ethan Allen Highway and Church Hill Road is one of many in recent years. The stretch of roadway is the last rural part of a long highway that is the major thoroughfare for many tractor trailers and motorists. In

Charlotte, the length of road that goes from the intersection at Church Hill, Ferry Road, and Route 7 and goes north to Shelburne is tricky: there is a double-lane passing area, a curve in the road, and then the other end of Church Hill Road, from which drivers pull into two lanes of traffic that are often traveling quickly. Though accidents seem to occur more than usual in this area, the problem appears to be more driver-related than road-related.

Adam Silverman, the public information officer with the Vermont State Police (VSP), said that VSP is unable to comment regarding the particular incident from last week that involved a 16-year-old driver who hit another car head-on, which resulted in the death of both the driver and passenger in the other car. He acknowledged that troopers who patrol the area, which is a state road and therefore does not count as hours for the VSP’s regular Charlotte patrols, are aware that this particular part of Route 7 is problematic.

“Troopers from the Williston Barracks have been directed to focus as much as possible on that highly traveled U.S. 7 corridor and to pay particular attention to aggressive, impaired and distracted driving,” he said, “the behaviors we know all too well are major contributing factors in many otherwise preventable crashes that result in serious injury and death.”

The Vermont Agency of Transportation (VTRANS) is responsible for maintaining Route 7; Transportation Systems Management and Operations Manager Joshua Schultz said that, though there are some steps the agency can take to make the roadway as safe as possible, driver behavior ultimately needs to be altered. Accidents are on the rise. “This year is especially bad,” he said. “Last year, 47 people died on the roads—which for the whole year was extremely low compared to previous years…but then this year, we’re three quarters of the way through and we’re at 50.”

In this area, Schultz said, there have been seven crashes in this corridor over the last several years. Those accidents were the result of driver error, including a DUI, a driver falling asleep at the wheel, and rear-end collisions, which he said are common at intersections—all driver behaviors that are ultimately avoidable. Though police patrolling the area more would help, Schultz acknowledged that this isn’t always possible. “Our police forces are spread thin, but they do the best they can.”

In coming years, Schultz said, VTRANS plans a paving project on Route 7 that Schultz said could mitigate the issues there. He said that when they repave sections of the road, they also look at things like signage, and that the safety group he’s a part of at the agency “gets the opportunity to weigh in…are there safety improvements we can put on this road?” He said that “unfortunately,” the nature of the intersection—cars stopped to make left turns across lanes of traffic where oncoming traffic is going quickly—tends to make these incidents “more dramatic” than they would be if traffic was moving more slowly.

Last year, VTRANS installed new lights at the intersection of Ferry and Route 7, which include a flashing yellow arrow rather than a plain green bulb for left turns. Possible additions to the roadway during the paving project are rumble strips in the middle of the road to alert drivers when they have crossed the center line, and clearer and brighter signage and repainting of center lines.

Town government has no control over this intersection, but VSP representative Silverman noted that “Lt. Bob Lucas, the commander of the Williston Barracks, is scheduled to appear before the Selectboard in a couple weeks to provide an update on these very issues.” The next Selectboard meeting is Sept. 28.