COVID-19 has put a few speed bumps in Nikolai Pughe’s life, but the 18-year-old doesn’t let it get him down. The Vermont Land Trust just recognized him as one of Vermont’s nine high school juniors and seniors whose dedication to agriculture or forestry rises above their peers. Pughe was awarded $250 for his work in agriculture, but the onset of the pandemic meant there was no awards ceremony. COVID-19 has also forced him to postpone his plans for getting a commercial driver’s license, but none of that is stopping Pughe from enjoying his summer work on the farm.

For the last four years, Pughe has been working at Green Mountain Hay. He starts every morning at 6:00 a.m., usually working until 6:00 p.m., but sometimes even later than that, baling, raking and tedding the hay. “I like everything about it,” he said. “I’m a hands-on guy and I like being outside. I can’t just sit in an office.” Work on the farm begins in early May and continues into late August. This year, the first hay cut was quite early thanks to the warm, dry weather. “We started baling in late May,” he said.

Pughe studied natural resources during his junior and senior years at the Center for Technology in Essex. During his junior year he also studied mechanical and small engines, and for his senior year, he added forestry. Although Pughe’s father did some farming when he was young, the rest of the family is not involved in agriculture. “I just want to be outside doing something,” Pughe said. “I’ve always wanted to work on a farm and I couldn’t pass up the opportunity at Green Mountain Hay.”

Pughe said COVID-19 hasn’t changed work on the farm that much. “We wear a mask when we need to,” he said “and we wash our hands, use hand sanitizer, and try to stay clean. It’s worked well so far.” As for the prize money from his VLT award, Pughe is putting that in the bank. “I want to save it for later,” he said “for a new car or for when I’m ready to buy a house.”

For the last decade, Pughe has been a fixture in the Charlotte Tractor parade. “It’s a tradition for me,” he said. “It’s fun being out there.” Pughe has driven several different tractors over the years, but is generally found riding older models. He also represented his school in tractor driving competitions. 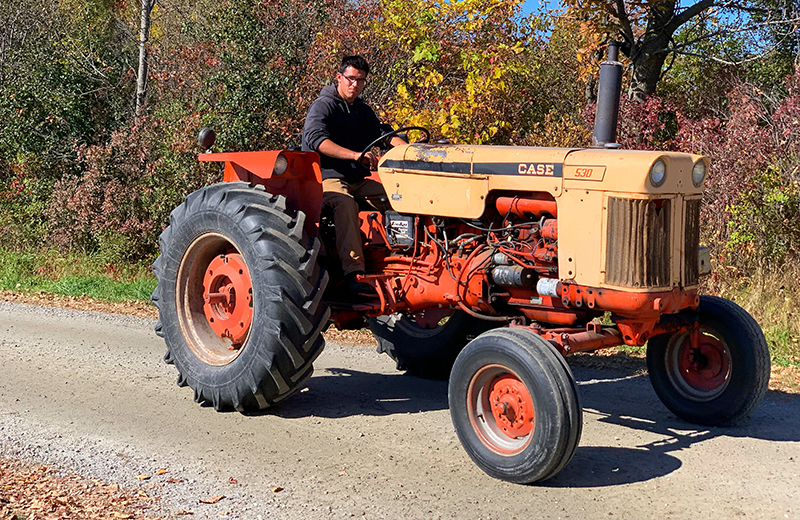 Nikolai Pughe doesn’t come from a family of farmers, but the desire to work on a farm is in his blood. Courtesy photo.

One of the perks of Pughe’s job at Green Mountain Hay is the opportunity to make deliveries. “I deliver hay all over New England,” he said. “I go to Connecticut, New York and Martha’s Vineyard. That’s a really nice trip, being out in the open and taking the ferry.” Pughe loves the fact that he’s being paid to take road trips. “I’m working, but I get to be out and explore,” he said. “Hay trips are like vacations.”

It’s good that Pughe enjoys his time on the road because he’s been working almost every day since the haying season started. “I haven’t had a day off in some time,” he said. Hard work at the farm means Pughe’s preferred form of relaxation is just chilling with friends or working on his trucks. He has a 1993 Chevy 350 dually and a 2010 Chevy S-10. He learned how to make repairs by watching his father.

Pughe isn’t sure what the future will bring. While waiting for the chance to earn his CDL license, he’s looking at other work options for when the haying season ends. “I love this job but it’s not paying me enough for me to move on,” he said. “I love it and I don’t want to leave it, but I’m going to have to find another job for the fall.”