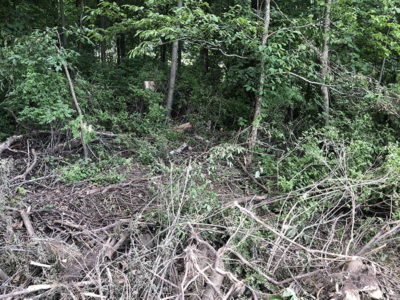 The Selectboard made a site visit to view a highway access permit application location on Morningside Drive. Also at issue are some trees that the homeowner removed. Photo by Chase McGuire.

Monday’s Selectboard meeting addressed multiple recent issues around town, including a residential application for a Highway Access Permit on Morningstar Drive, a recreation COVID-19 update, and discussion of an updated Animal Control Ordinance at Thompson’s Point.

Will Bown and Megan Browning have applied for a Highway Access Permit to Morningside Drive in order to access a plot of land they had purchased last fall. The proposed plan would include cutting down multiple trees that are under dispute of ownership. One of the major issues is that some of the work extracting trees under contest with the Morningstar Cemetery Association has been done before the permission from the town was given to the landowners. Bown has admitted fault and acknowledged that they have acted without proper permissions and could have possibly disturbed cemetery lands. Peter and Nancy Richardson, members of the Morningside Cemetery Association, argue that this plan impedes cemetery lands, while Bown and Browning argue that the last conducted survey shows it as theirs.

The Morningstar Cemetery Association is planning to contract a surveyor to determine if the trees that have been prematurely extracted, as the land has not been surveyed since 2009 when the previous owner planned on the same construction; the plans were approved at that time but construction never commenced. No official decision regarding the removal of the trees or the permit will be made until the land survey is complete.

While the Selectboard has been keeping their eye on the Governor as to the status of opening playgrounds, at this point in time, there has been no official decision made. The governor’s office has not approached the question of reopening municipal playgrounds. In Charlotte, protective tape placed around the border of the playgrounds has been removed by visitors on multiple occasions and discarded. While the playground is clearly being used, the Selectboard discussed signage that would eliminate the risk on behalf of the town if folks choose to ignore caution tape.

The Charlotte Town beach sold 620 passes in the first two weeks since opening, surpassing previous averages of 200 passes sold at this time since Memorial Day. Recreation Commission Chair Bill Fraser-Harris and Recreation Director Nicole Conley reported that beachgoers and passholders have been respectfully social distancing, even while attendance is very high during the recent heat wave. The only issue has been the backup on Lake Road while parking.

The town allows open flames in the provided barbeque grills and discourages fires outside of them. There is a growing concern about the amount of fires happening after the beach attendants have left for the day. There is much consideration addressing the language of signage at the beach, explicitly outlawing open fires in hopes to avoid the hazard of large flames. Ultimately, though fires are technically not allowed at the beach, Fraser-Harris said that for now the rule can be unenforced. “It’s not a problem until it’s a problem,” he said.

Currently the Selectboard is discussing a solution to the lack of a dock over the rocks at the beach as a way to get to a safe swimming depth. This would provide a greater safety measure than natural entry but would also increase touch points for those utilizing it. The Governor’s office feels that the dock situation was addressed with its stance on opening marinas. The town is comfortable moving forward with installing a dock with appropriate signage that would discourage excessive gathering and usage of the dock because the greater number of touch points could possibly be catalysts for the spread of the coronavirus.

The Thompson’s Point Land Association proposed an Amendment Request to the current Animal Control Ordinance in the area. The request calls on the town to address the fact that there have been more dogs and their owners frequenting the point every year. Recently, due to the COVID-19 pandemic, there has been an increase in people bringing their dogs to Thompson’s Point due to many people working from home. While this is a seasonally populated area, 83% of stakeholders in all categories favored a rule imposing leashes on all dogs in the area from April 15 to October 31. As the number of dogs in the area has increased every year as more people become familiar with the area, the original language regarding animal control, specifically on Thompson’s Point, never addressed “out of control animals and out of control poop.” It is important to note that this change would only apply to Thompson’s Point.

Chase McGuire is a student reporter from the University of Vermont’s Community News Service. It is a student-powered partnership with local community papers. With a focus on hyper-local and local news, the project has two primary goals: To train and educate student journalists and to provide local content to community newspapers.