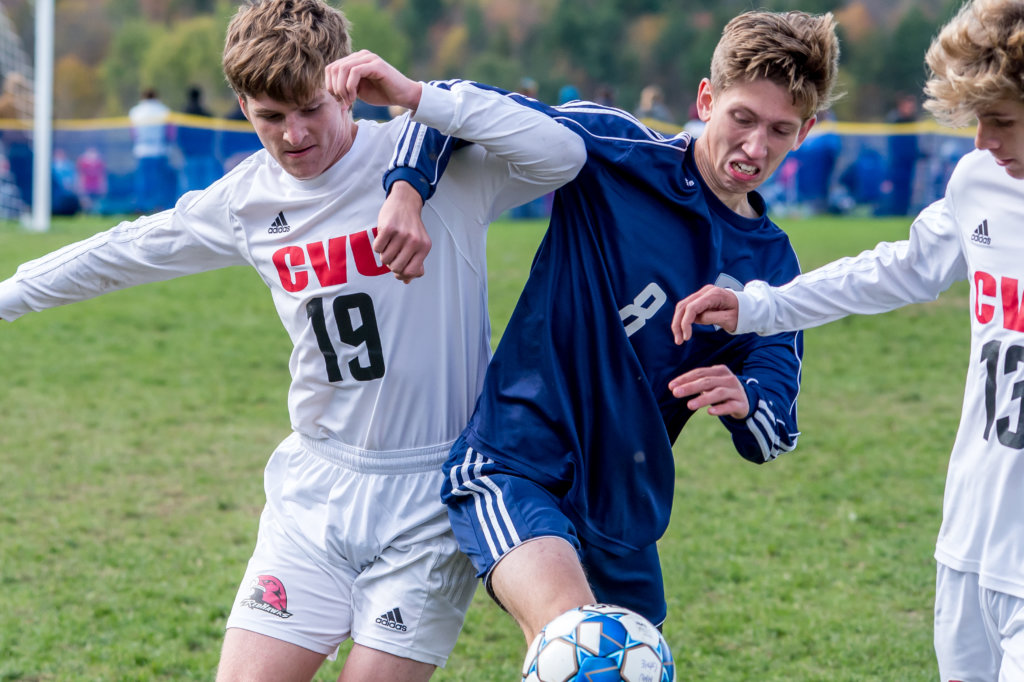 On June 8, Gatorade announced CVU’s Cullen Swett as Vermont’s Gatorade soccer player of the year for the 2019-20 season. The award is based on athletic excellence, academic achievement and exemplary character demonstrated on and off the field. Swett has been recruited to play at the University of Vermont in the fall. Shown in photo, CVU’s Cullen Swett (19) tussles with a Cougar. Photo by Al Frey.

American Legion baseball canceled
Vermont American Legion baseball has cancelled its 2020 season for only the fourth time since it began in 1928. The last time was 1945, and it was not held for the next three years during World War II. Vermont has 16 Legion teams that play in Northern and Southern Divisions. S.D. Ireland Construction Company sponsors the Charlotte-area team in the Northern Division.

Make-A-Wish Hockey Classic takes its wish off the list
The Make-A-Wish All-Star Hockey Classic will not be held this year. Were it played as scheduled in Stowe Arena, it would have been the 28th game for men and 23rd for women. The Mount Mansfield/CVU women’s team had Nicole Wright on its roster, and the CVU men’s team imcluded James Bernicki. Normally proceeds from the game go to help children with life-threatening medical issues. The event has raised over $300,000 since it began.

CVU’s Finn O’Brien granted VGA Scholarship
Redhawk golfer Finn O’Brien was one of 14 recent high school graduates who earned scholarships to attend colleges/universities of their choice. Finn selected the University of Vermont. Forty-nine students currently receive scholarships from the Vermont Golf Association Scholarship Fund. They are all Vermont residents who have been accepted to college on a full-time basis.