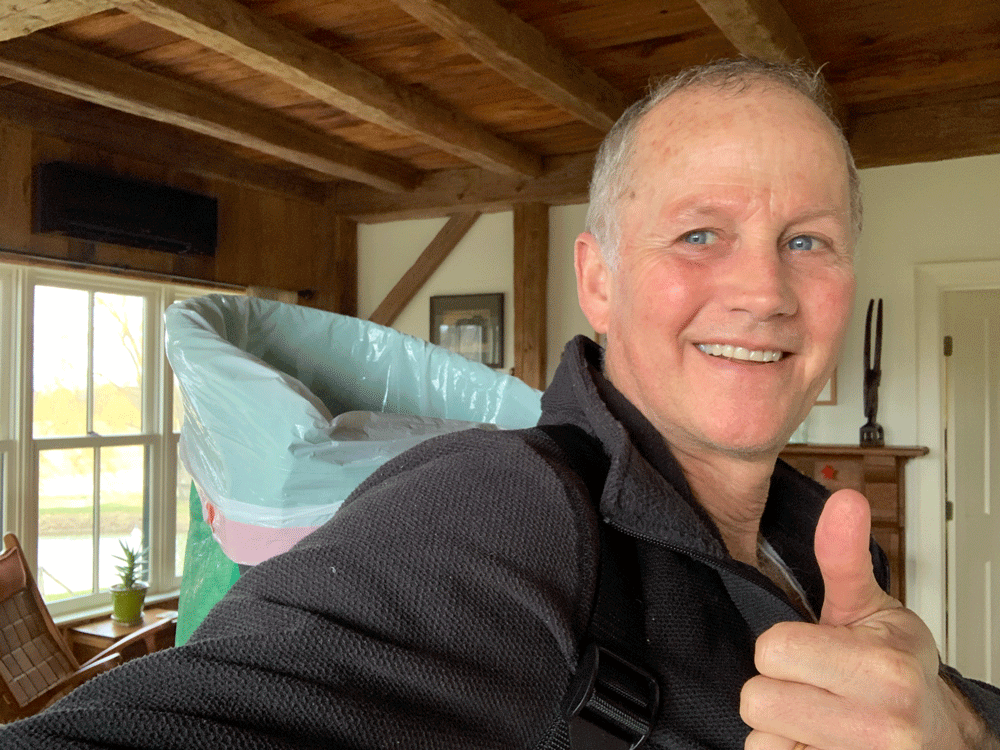 When he was interviewed by the Selectboard regarding his interest in being the town’s representative to the Chittenden Solid Waste District (CSWD), Ken Spencer joked that he wanted the appointment because he was bored. The truth of the matter is the position was tailor-made for Spencer, a veteran Green Up Day Coordinator and the creator of Planet Pack, a backpack designed for collecting litter. “It’s an opportunity for me to get educated,” he said. “When I talk to groups, it will be good to know more about recycling and waste management streams.”

Abby Foulk, Charlotte’s long-time CSWD representative, encouraged Spencer to apply and will serve as his alternate.

For the last three years, Spencer and Kim Findlay have been co-coordinators for Green Up Day in Charlotte. Because of COVID-19, this year’s event will be a little bit different. It has been postponed to May 30, there will be markers at the sign-in to prevent people from getting too close to one another, and there won’t be a donut table. New this year will be a washing station for recyclables.

“Traditionally, people haven’t wanted to deal with recycling on Green Up Day,” Spencer said, “but this is an opportunity to learn more about what can and can’t be recycled.” Bottles and cans will be cleaned at the station and brought to Tenney’s Bottle Redemption as a thank you for their work.

Several years ago, Spencer designed the Planet Pack backpack for picking up litter and launched a Kickstarter campaign to raise funds to produce 1,000 packs. He met his goal, in part through people who loved the concept but didn’t necessarily want their own bag, and roughly 200 packs have been pre-purchased. Spencer sells the packs through his Planet People website. He said he wants that site to be more than a commercial endeavor and hopes it can be used to disseminate ideas that will help people reduce litter.

He also donates $5 in each purchaser’s name to one of Planet People’s partners, which include a number of Vermont environmental nonprofits and others further afield, including the Adirondack Mountain Club and a community garden program in Harlem.

Spencer has a program for schools to purchase Planet Packs or for schools to ask for donations toward their purchase. “They can go to any age classroom that has a motivated teacher,” he said. “Once kids start going around with the packs, people will thank them and it will provide positive energy. I’m hoping schools will set up competitions or other events and the kids will become ambassadors for the packs.” For every 60 bags of trash collected, the students will get a free Planet Pack. Spencer hopes to set up a similar program for senior and community centers.

The current pandemic has the potential for creating more trash with single-use plastic bags replacing reusable ones, but Spencer hopes the situation is temporary. “I think it’s completely appropriate to do what we have to do to keep people safe,” he said “but it points out the importance of thinking about single-use products. It’s a gigantic shame that we will have a pile of stuff that will never degrade.”

One way Spencer is cutting down on single-use plastics in the waste stream is through a partnership he and Findlay have established with a company called Trex, which makes decking and siding. The Old Brick Store, Spear’s Corner Store, Charlotte Library and Charlotte Senior Center have placed boxes for the collection of stretchy plastic material ranging from dry cleaning bags to Saran Wrap and pellet bags. Once a week, Spencer brings the content of the boxes to Hannaford’s, and once a month Hannaford’s sends the collection to Trex. Spencer collects over 150 pounds of plastic each month, and through the Trex incentive program he has received four benches made of recycled milk jugs that were donated to the collection sites.

A former lawyer, restauranteur, teacher and nurse, Spencer says he enjoys picking up litter. Every day this year he has cleaned a two-mile section of Greenbush Road, moving from town line to town line. “I really like doing it and talking to people about what I do,” he said. “I love finding simple things that people can do to help out. This is safe, fun and COVID-friendly. It’s a very mindful, peaceful thing to do; it’s healthy, it’s easy and it feels good.”