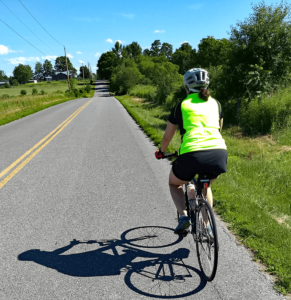 The advent of good weather, coupled with continuing stay-at-home restrictions, has unleashed cycling enthusiasts to get on their bikes and ride. Given the increasing number of cyclists on Charlotte’s roads, now is a good time for our annual reminder to both drivers and cyclists about how to share our roads safely.

Cycling is one of the best forms of outdoor exercise available to us. It is also dangerous. According to the National Highway Traffic Safety Administration (NHTSA), 857 cyclists were killed in traffic crashes in 2018, and 55,000 were injured seriously enough to file a report; vastly more were injured less seriously.

As a driver and a cyclist, I’d like to suggest some ways motorists and cyclists can share the road safely. First, for motorists:

Give us a brake
Two situations pose particular dangers to cyclists. The first is when a car is coming from behind us in our lane and another is coming at us in the oncoming lane, and we’re all going to meet at the same spot in the road at the same time. The second is when we’re slowly laboring up a hill and into a curve. In either situation, there is no good outcome for the cyclist if the motorist coming from behind misjudges the space available for passing.

If you’re coming up on a cyclist and another car is coming toward you and all three of you are going to meet at the same point in the road, slow down and let the oncoming traffic get clear before passing us. And wait for us on blind curves and hills. Perhaps remind yourself as you slow down and delay your arrival somewhere by a few seconds, or even a few minutes, that the cyclist in front of you is someone’s child, parent or grandparent doing something that contributes to their health and well-being—and that the time invested in slowing down is well worth the time and hassle of the ensuing legal procedures and the multiple years of increased insurance that can come in the wake of an avoidable accident.

Turn your lights on
Most cyclists ride with a small mirror attached to their handlebar or bike helmet. It’s far easier for us to see you coming in our mirrors and to make the appropriate adjustments in our riding, like getting into single file, if your lights are on. This is particularly true if your car is dark colored. Darker cars often blend into the asphalt and are almost invisible in our mirrors until they are fairly close behind us. Not so, however, if their lights are on.

If you’re hauling a trailer…
Twenty years ago I was knocked off my bike and into a hospital when a driver pulling a hay trailer passed me and swerved back into my lane too soon. A week ago, my wife, who was riding in front of me on Hawkins Road in Ferrisburgh, almost got hit by a boat trailer when that driver also pulled too quickly into our lane after passing us. Vermont law requires motorists, when passing cyclists, to “exercise due care, which includes reducing speed and increasing clearance to a recommended distance of at least four feet.” That four-foot clearance applies to both the vehicle and the trailer. Violations are subject to a civil penalty of $200 or more. My best guess is that the boat trailer missed my wife by about 12 inches.

Do the Dutch reach
Parked cars also pose a danger. Cyclists can, and do, get seriously injured when a driver opens the driver’s-side door just as a cyclist is passing by. The easy way for the driver to avoid “dooring” the cyclist is to open the door using the hand farthest away from the door. By reaching across your body with your right hand, your torso and head turn toward the door, which enables you to scan the side mirror and, by twisting a bit more, look behind you for oncoming traffic before opening the door. For everything you need to know about the Dutch reach, including several short videos, go to this website.

Now for cyclists
For NHTSA, there is one overriding rule: Ride defensively. Wear a helmet and bright clothing. Equip your bike with a white front light and a red tail light. Be constantly alert to road and traffic circumstances, and anticipate the actions of pedestrians and vehicles. NHSTA’s rules of the road include the following: