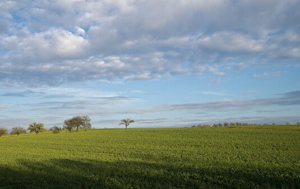 Whether you are a forest manager, landowner or enjoyer of the outdoors, it can be intimidating to know your role in the management of our forests. While there are some examples of good stewardship, humans’ track record as land managers over the last few hundred years has been mostly poor, resulting in wholesale deforestation, the extirpation and extinction of numerous wildlife species, the introduction of invasive exotic plants, pests and pathogens, and the numerous stressors posed by climate change.

Regardless, I believe that humans can develop an active, positive relationship with the land, one that protects and provides for both. A good roadmap for how we do this can be found in the formation of a “land ethic.”

Forester, author and conservation thinker Aldo Leopold posited the idea of a land ethic in his beautiful and seminal book “A Sand County Almanac,” published in 1949. At Leopold’s time, an “ethic” was defined as a system of standards, morals and rules, for how humans treat each other. Leopold wondered why, when we had ethical standards with respect to other people, our relationship with the land was unethical, resulting in widespread environmental degradation.

Just as a lack of ethics harms our human communities, Leopold noted that a lack of ethics toward the land harmed natural communities and ultimately ourselves, as we rely on the land for our survival and quality of life. Leopold’s land ethic sought to expand the boundaries of our community to include the land, thusly ascribing the same ethics to the land as we do to our human communities. This approach is still unusual today, as many people would either protect the land by completely separating humans from it or regard the health of the land as something completely subordinate to human interests.

Leopold wrote, “[A] land ethic changes the role of Homo sapiens from conqueror of the land-community to plain member and citizen of it. It implies respect for his fellow-members, and also respect for the community as such…when we see land as a community to which we belong, we may begin to use it with love and respect.”

The goal of the land ethic is essentially three-fold. First, we must recognize the value of ecosystems to ourselves and our society. In Vermont, forests clean our air and water, regulate our climate, protect our infrastructure from floodwaters, provide habitat for wildlife and the pollinators of agricultural crops, sequester and store the carbon, and much, much more. They also provide economic benefits by producing renewable resources like maple syrup and timber, and amazing and economically important forest-based recreational opportunities. They provide the context for everything we do as Vermonters, making our state a beautiful place to live, work and visit. They are critical to our physical health and quality of life, and the cultural and economic health of our communities.

The second part of the land ethic’s goal is to recognize the intrinsic importance of our forests and other ecosystems. Leopold would argue that all the parts of forests, from trees to wildlife, have value regardless of whether they serve a direct human purpose. A modern understanding of forests reinforces the practicality of this mindset, as science increasingly reveals how seemingly insignificant parts of forests, like fungi and invertebrates, are critical to the health of the entire system, including the parts of it that we traditionally value more highly like trees and wildlife.

Finally, a land ethic helps us understand how humans can play a positive role in the stewardship of the land. By considering the previous two points, Vermonters can manage forests in a way that is truly symbiotic, including helping them recover from past human land use, buffering them against the effects of a changing climate and protecting them from human-introduced invasive exotic species, all while responsibly harvesting local, renewable forest resources. Using local, renewable resources maximizes the local benefits and minimizes the global harm of resource production and consumption, helping us be better local and global citizens.

Leopold would say that a land ethic “evolves in the mind of a thinking community.” Maybe thinking about the land ethic is just a gesture, but hopefully it is one that enriches our relationship with the land and helps us establish a more thoughtful, sustainable relationship with it. I think that we can all agree that forests and ecosystems deserve intentionality, thought and ethical treatment.