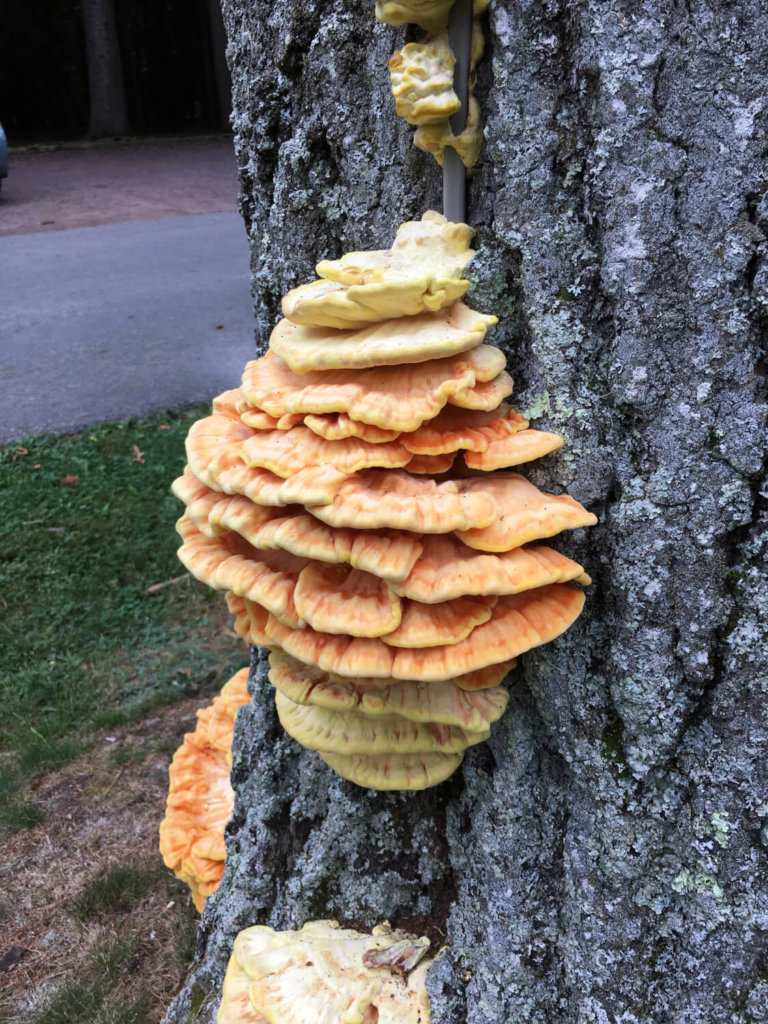 Mushrooms? It seems that I’ve cooked with the little button mushrooms found in most grocery stores forever and enjoyed them raw in tossed salads. About 12 years ago, I was introduced to the Portobello mushroom by my son-in-law, David, who cooked them on his charcoal grill. They were delicious! Gradually over the years, I’ve become aware of the great variety of mushrooms available, both in the health food and regular grocery stores and in restaurants. I’ve enjoyed ordering them in restaurants but very seldom bought any fancy mushrooms—largely because I didn’t know enough about them, and they are expensive. So I used the button mushrooms whenever any kind of mushroom was recommended in a recipe, much too timid or too lazy to adventure further. And I never, ever was tempted to try any mushrooms that I found growing naturally outside.

However, I’ve always been fascinated with the mushrooms that sprang up on the ground or on fallen tree trunks in the Northeast, wherever I was. There are a dizzying number of kinds, so many that I couldn’t imagine ever learning about them; and we’re all taught that some are deadly. But which ones? I became increasingly interested in knowing what ones might be edible, even as I never picked and brought any home to my own kitchen. Hen of the Woods

But I bought books and attended a few walks and talks here in Chittenden County. The first book I bought, about 10 years ago, was Mushrooming Without Fear, The Beginner’s Guide to Collecting Safe and Delicious Mushrooms, by Alexander Schwab. Without fear, really? The first bit of advice in this book was to stay away from gilled mushrooms. Since I had thought that all mushrooms were gilled, it was quickly apparent that my first task was to learn what other kinds of undersides there might be.

Gills radiate out from the central stem on the undersides of the cap toward the outside edge in regular patterns. By contrast some mushrooms have tubes, spines or ridges on the undersides that look very different from the much more common gills. For starters, they are irregular in pattern, much like a sponge or a brush. The book advises, “Never, never take a mushroom with gills!!!” It has other bits of advice too, like: “If a mushroom smells rotten, it is rotten, and if it feels soggy, it is soggy.” And, “Never, ever eat wild mushrooms raw.”

One summer morning years ago, while hiking down a stream bed in the Poconos with my sister, we found an abundant crop of 50 or more small white mushroom caps on a fallen log, just like the little button mushrooms in the grocery store. “Oh, look at those oyster mushrooms!” she exclaimed. We stopped to admire and photograph the log with its little white caps but didn’t pick a one. Even now, I think about those little caps covering the log and wonder: Should we have picked some? Why didn’t she pick some since she seemed to know what they were? To this day, I’ve not picked an oyster mushroom in the wild, only from logs that were intentionally inoculated, but that’s another story.

When I moved to a cohousing community in Charlotte and became friends with Wolfger Schneider, who had some knowledge of our local fungi, we talked about what fun it would be to collect and cook a few of those fungi from our own property or elsewhere. By the end of that summer, Wolfger had come across a huge mushroom at the base of a very dead oak tree just south of our houses. It was big, brown, gray and white, about 12 inches wide in a circular pattern with many circular and wiggly layers, reminiscent of a peony or a little girl’s “tutu.” Wolfger recognized this mushroom as a “hen of the woods” (Grifola frondosa), called maitake by the Japanese. He brought a piece back to his house, and we looked it up in several books to be sure it would be safe to eat. It had no gills and was quite smooth on the undersides, which the books identified as tubes—small and velvety in young sections and considerably coarser in larger, older specimens.

In time we were convinced that it was okay to eat, so we chopped up a small piece of the fan-shaped cap, fried it in butter and tried it. It was delicious, and best of all we felt fine the next day. After that, Wolfger and I both returned to the old oak tree and gathered more of this same mushroom, being careful to leave about half of it to spread its spores for next year. I filled a plastic grocery bag with the pieces, cut them up, fried and then froze them in small containers so I could revel in the novelty of adding these wild mushroom pieces to soups, stews or scrambled eggs during the winter. I was thrilled to be able to eat this particular mushroom that I had gathered myself.

Then this summer, visiting again in the Poconos in late September, another kind of mushroom appeared on an oak tree, higher up on the trunk, some even as high as six or seven feet. It was close to the entrance to an inn where I was staying, and people stopped to admire the large clumps of orange and yellow fan-shaped mushrooms, very similar, but not the same, as the hen of the woods. Was it safe to eat? Probably, but no one who passed by was willing to try it.

So I took photos and emailed them to Wolfger and another Vermont friend, Roel Boumans, who I knew was familiar with mushrooms. Both men sent links to websites so I could decide for myself. In no time, after studying the several pictures and reading the texts, I was confident that this mushroom, called “chicken of the woods” (Laetiporus sulphureus), was safe to eat. My sister joined me in tasting it, and we both agreed that it was good; in fact it tasted like chicken!

And once again, I went back, gathered more of that fungus and fried and stewed it. Now I have little containers of chicken mushrooms in my freezer to enjoy this winter.

And what about the “hen of the woods” here in Vermont that we had gathered for the past few years? Those no longer grow at the base of that first old, now very dead, oak, but they have recently been discovered on our favorite oak tree deeper in the woods, which we call the “Mother Oak.” Wolfger, and I were both distressed to find the mushroom on this tree, as it means there is decay inside the roots of this elegant old oak. But we’ll certainly enjoy the wonderful flavor of this mushroom during the brief time that it “blossoms” and spreads its spores each fall. However, it will surely be back next year, in the same place at the base of this tree, and for many years to come, as we can anticipate that our “Mother Oak,” while not its once healthy self, will take many years to wilt away altogether.

It is hard to express how very much I enjoy collecting and eating the few mushrooms that I have come to trust. Perhaps that is because of my fear of making a mistake, much like the thrill of accomplishing anything when one is apprehensive before starting.

I look forward to enjoying and sharing my little stash of mushrooms this winter and to learning about other mushrooms, a few each year and always with the help of my more knowledgeable friends.

Mary Van Vleck is a Charlotte resident and member of the Charlotte Conservation Commission. This group meets monthly, usually on the fourth Tuesday at the Town Hall; meetings are open to the public.