My own Front Porch Forum

My own Front Porch Forum 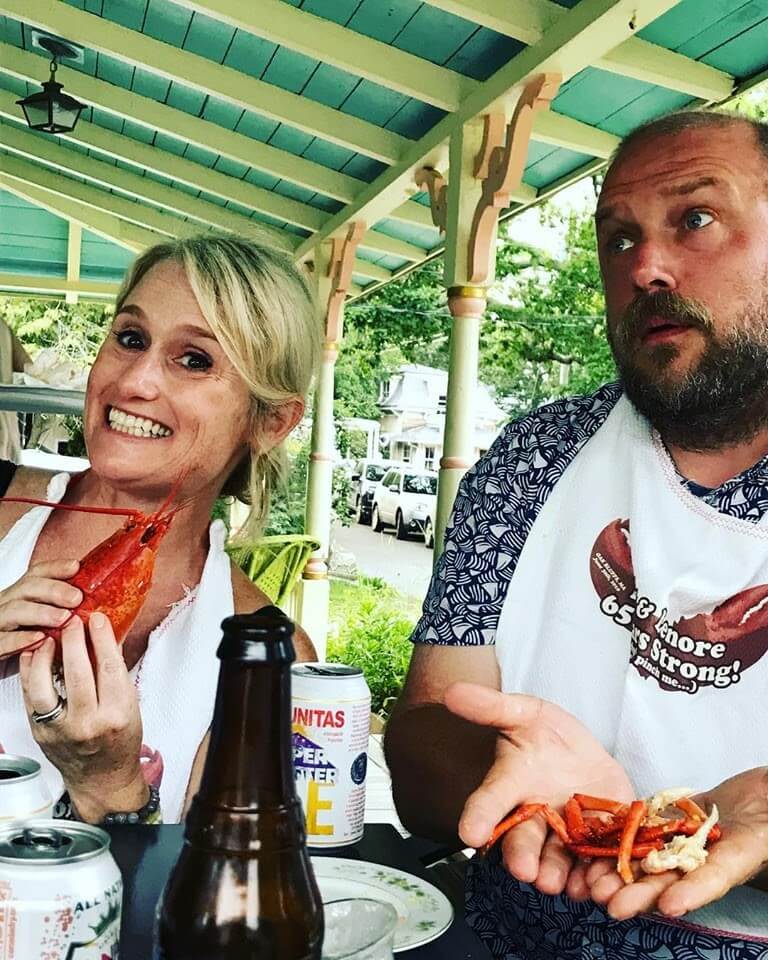 My son Ian and my daughter-in-law Nicole preparing to scarf lobster on Martha’s Vineyard. Photo by Chriss Merritt.

Took my dreams down by the sea
Sailing yachts and lobster pots and sunshine
Logs and sails and shell oil pails
Down where the water skiers glide . . .
~ Banquet, Chris Thompson and the Manfred Mann Band

Last week was our annual family gathering on Martha’s Vineyard—family being four generations between ages six and 92. My wife’s family has owned a cottage in Oak Bluffs for 50 years, and once my father-in-law gave up farming and work for the State of Connecticut, he and my mother-in-law spent most summers there with visits from the rest of us and ultimately weeklong reunions of the clan. (My Scots relatives and Mel Gibson would have been proud.)

We have reached a family size that doesn’t allow us all to stay in one cottage, and we require a rental in addition to the owned stead. Our two sons, their wives and four grandkids share the rental with Beth and me. So far we have managed to leave the three family hounds on the mainland. The rental is just a block from the original, called “Plum Blossom Place,” so we can traverse back and forth easily, food being the primary reason for the travel. Each group of the clan carries out at least one dinner duty, with the late-week lobster meal being the primary feast.

Having grown up in southern Minnesota farm country, I knew very little about seafood, but the Vineyard has changed that dramatically. My mother would roll over in her grave if she heard that I actually enjoy fish, lobster, clams, shrimp, mollusks—all those delights from the ocean to which Mississippi River Catfish and even Lake Superior Lake Trout can’t hold a candle.

One of the real benefits of the years on the Vineyard was my father-in-law’s befriending the local fresh lobster storeowner who would each year save just the right sized marine crustaceans for the Skilton clan. It was as much fun going to his store—the Net Result—and looking through his basins of live lobsters as it was eating what we got. I have a picture of my younger son Ian holding up a 23-pounder that appears to be somewhat less than happy in his clutches. At 23 pounds, he probably could devour Ian as well as the other way around.

As many of you may know, Martha’s Vineyard began as a Portuguese whaling colony. It is comprised of a number of villages, each with its own character. Ours, Oak Bluffs, is known as a multicultural hub, being one of the first vacation spots where blacks and whites mixed easily. It is interesting to sit on the porch and watch the groups of many generations and mixed ethnic identities walk down the street chatting, a number heading to a beach at the end of the block named the “Inkwell” for the African Americans who frequented it.

Up-island to the southwest end are the towns of Tisbury, Menemsha and Aquinnah or Gay Head, (part of the Wampanoag reservation), again each with its own character. Aquinnah has become the financial center for the tribe and is governed by a tribal council that plans to build a casino on its cliffs. The character Tashtego in Herman Melville’s Moby Dick is a Wampanoag harpooner from there.

Menemsha is the one to which I have become attached, not only because of its great seafood deli on the lower end of its fishing pier but also because it is the site of a landmark that has personal relevance to me. While sailing with a friend at the other end of the island, he heard my grandsons refer to me as “Squid,” a nickname selected based on my reply to the question when they were born of what I wanted them to call me, and my reply, “I don’t know. They’ll figure something out. They can call me Squid for all I care.” Bingo! A picture arrived of newborn twins wearing onesies that said “I  Squid” on the front.

My sailor friend asked me if I was familiar with a planked resting place by Larsen’s Market at Menemsha that the commercial fishermen called “Squid Row” and on which they sat after emptying their catch. I had to admit that I was not. However, the next time we headed up-island, I perched for a picture on the four-by-four.

I don’t want to bore you with tales of my vacation. However, for an island not far off Cape Cod, the Vineyard holds a diversity of culture from which our Congress and our president could stand to learn something. And I assume many of the island’s “Squad” would likely join our Vermont Congressman Welch in seeking impeachment.

However, impeachment will have to wait because I am in the lobster bucket and can’t get out until I devour the last claw.