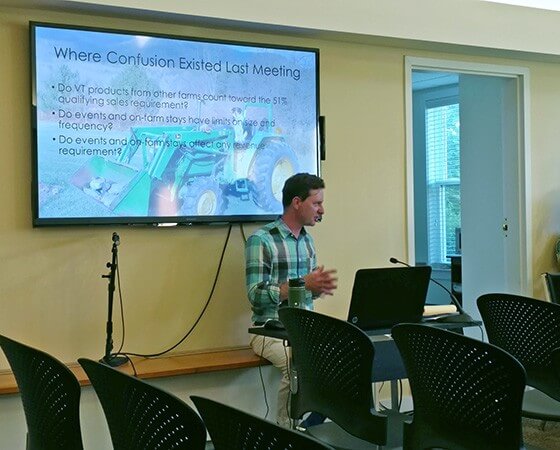 The Monday, July 8 Selectboard featured a full, albeit routine agenda, including a presentation from the outgoing zoning administrator on accessory agricultural uses and Act 143.

Town Meeting
The Selectboard discussed the Town Meeting voting process, with Chair Matt Krasnow asking if there was “interest in changing the existing ordinance which will sunset the town charter.” Town Administrator Dean Bloch said after this year’s Town Meeting the charter would “have nothing attached to it. It’s a vessel for putting in provisions for Town Meeting.”

While no action was taken on the topic, ways to increase attendance were discussed, including changing the day of the meeting and offering food, music and child care. Selectboard member Louise McCarren also raised concerns about the Town Meeting agenda order, saying “serious and important issues are raised” under new business “when there may be few people there.”

During public comment, Andrea Regan, physician at the Charlotte Family Health Center, spoke to the Selectboard about the wastewater aspect of the Health Center project. Citing cost-prohibitive estimates for off-site septic, she asked the board to consider leasing capacity to both the Health Center and Charlotte Children’s Center. Krasnow suggested the topic be added to the July 22 meeting saying, “This is the crux of growth in Charlotte. Health service is an essential service.”

Act 143 and Philo Ridge Farm
Outgoing Zoning Administrator Aaron Brown presented his findings and recommendations regarding agricultural accessory uses and Act 143. In seeking clarifications of Act 143 Brown noted that, during a meeting with the state, “They admitted it’s up to the towns to determine what’s appropriate for accessory on farm businesses.”  While his recommendations included amending regulations and establishing thresholds for site-plan reviews, he said that if the town wants to encourage accessory uses it should codify what’s permitted.

Part of the law requires accessory agricultural activities to have 51 percent of sales come from qualifying products principally produced on the farm. Several members of Philo Ridge Farm spoke to the Selectboard on the topic.

Interim Director Tad Cooke brought samples of items produced from the farm, including a leather purse and a dessert. Cooke said, “The strawberry shortcake flour is from Nitty Gritty Farm, heavy cream from Kimball Brook and strawberries from our farm. What is that value?” Greg McCargo said, “We should encourage a new generation of thinking around ag. Keep it broad and open and see where it goes. There’s no need to narrow it right now.”

Planning Commission members also spoke, including Chair Peter Joslin and Marty Illick. Both expressed the need to define or describe the town’s intent regarding Act 143. Several members of the Selectboard agreed. Ilick suggested, “With so much expertise [and] good depth of knowledge, we would be very happy to have language submitted to the Planning Commission. We want to get the land use regs right in the beginning.”

Other business
The board appointed James Faulkner to the Planning Commission, with a term ending April 30, 2022; the motion to appoint him passed 4-0 with Carrie Spear abstaining. The board approved hiring temporary cleaning services while the RFP for cleaning the town hall is re-released. The board then set July 15 for interviews of the four applicants for zoning administrator and set dates for the next site visits to town properties: the town pound on July 22 and Williams Woods on August 12.

Krasnow also opened the bids for the village wastewater system maintenance. Of the three bids submitted, Wind River Environmental dba Hartigan Wastewater was the lowest at $4,330, followed by B.P. Wastewater Services of Vermont for $5,600, and Champlin Associates for $13,510.