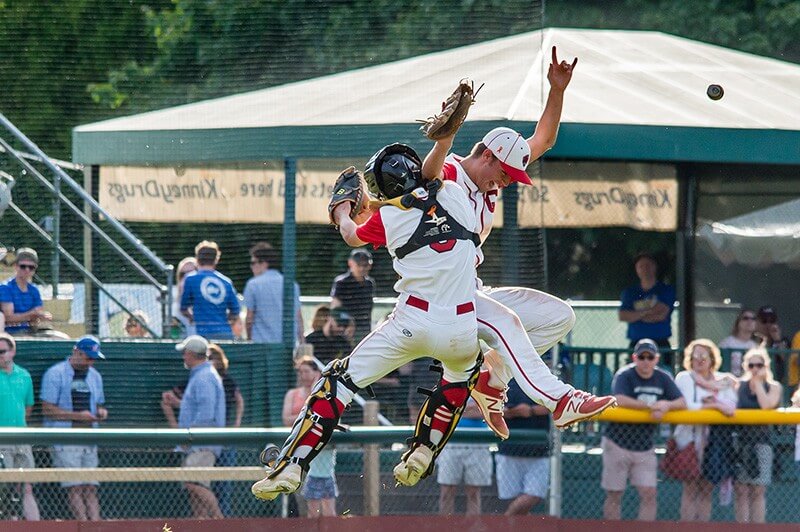 State champions
Redhawks Womens tennis, baseball and lacrosse all brought home Division I state trophies last week. The tennis women took five out of seven matches from South Burlington, none of which went beyond two sets. The tournament was particularly heartening for CVU, because it was the Wolves who finally broke the Redhawk’s 75-game winning streak in May, leaving CVU 14-1 for the regular season. The top three singles players—Sophie Dauerman, Corina Gorman and Ella Kenney—led the way, while number five player Julia Grant finished off the singles wins 6-2, 7-6. The first doubles pair of Courtney Vincent and Charlotte freshman Lindsay Beer won the top half of their pairings. The victory was particularly gratifying in light of losing Assistant Coach Ian DeGroot to cancer earlier in the year.

It has taken six years for CVU’s baseball team to finish as state champs, but they did it behind the pitching of their ace lefthander, Ian Parent, who pitched a complete game, allowing only four hits by Mount Mansfield while striking out ten in a 5-2 victory at UVM’s Centennial Field. Although he was coming back from throwing 120 pitches only four days prior, Parent managed to quell any attempts at a comeback by the Cougars. Leading by a run from the first inning, CVU held on for a couple more until MMU tied it in the top of the third. However, the Hawks maintained the margin, going ahead 3-1, and topped things off in the sixth with two more runs. As has been a season’s trait, the Redhawk offense did not have to rely on a few big hitters. Singles, some by bunts, and an occasional extra-baser paved the way to victory.

Seven years in a row marks the mens lacrosse state championship with a Redhawk label.

This year it was Burr and Burton Academy coming up from the south to face CVU on UVM’s Virtue Field. CVU started the scoring early, not missing the net. They went on to lead until B&B came back to go ahead briefly. However, the Redhawks again went up by seven goals, this time having to halt a Bulldog rally in the fourth quarter to post a 15-13 win. Three Hawks, Charlotters Sam Sturim and Max Gorman, and Jake Schaefer, had hat tricks. Midfielder with a long stick, Noah Martin, hit the net twice as did Alex Leonard. James Bernickie was the assist leader with three in addition to a goal. The fourth quarter was a salient one with Burr & Burton pulling within two with only half a minute to go. It could, in fact, have been a one-goal game had not the CVU net’s cross bar received the last shot from the opponents. Coach Dave Trevithick claimed another state championship in his 14th year at the Redhawk helm.

State womens track shows Redhawks in second
In second place among thirteen schools, CVU women gave St. Johnsbury Academy a good run for their money. As has been the case for most of the year, the 1,500 and 3,000-meter runs have been a Redhawk showcase. The D.G. Weaver Athletic Complex at Burlington High School saw all CVU runners topping the field again at 1,500 with Alicia Veronneau, Ella Whitman, Alice Larson, Jasmine Nails and Finn Mittelstadt across the finish line in that order. At 3,000 Ella Whitman led the way followed directly by Alice Larson and Catherine Noel. The 4X400 Redhawk relay team (Elizah Jacobs, Olivia Kinsel, Caroline Hill and Jasmine Nails) claimed victory over the next two finishers, St. Jay and Essex as well as North Country, South Burlington and Mount Anthony.