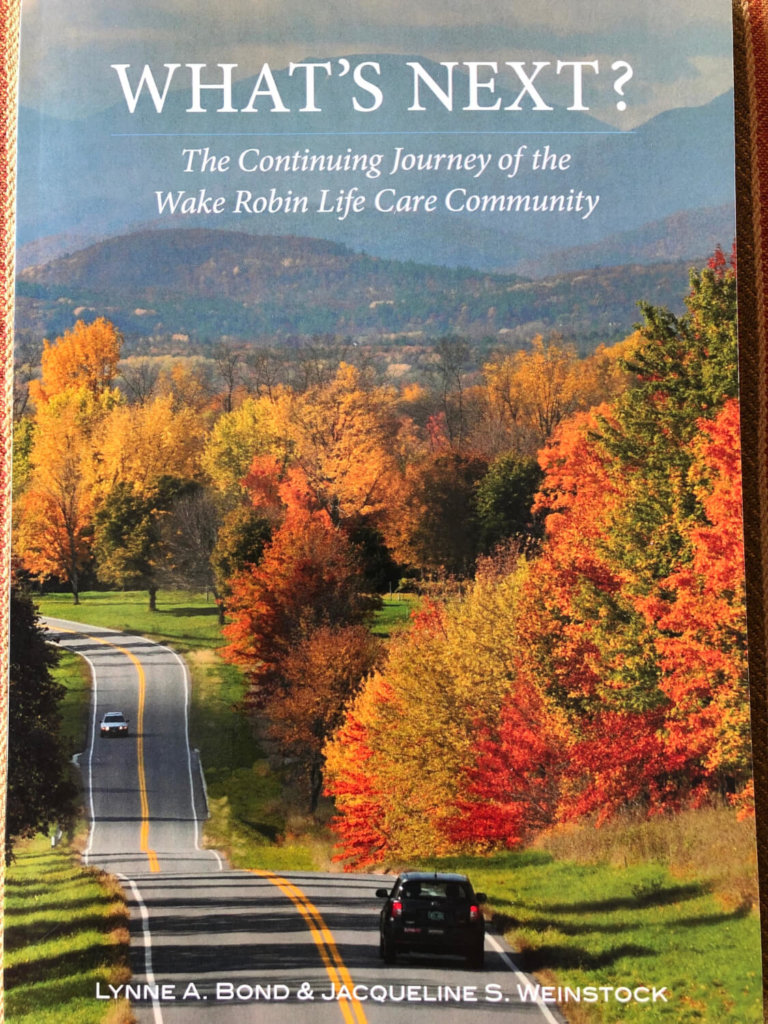 Right around the corner from Charlotte, on Bostwick Road, tucked back from the main road, sits a quiet senior living community called Wake Robin. Retired University of Vermont psychology professor Lynne Bond, whose mother and in-laws had lived at the property, didn’t know much about it. That changed when a group of Wake Robin residents approached her in 2015 to figure out what exactly was going on there—in a good way. “They had a sense that something special was going on there,” Bond said. The initial conversation blossomed into a long-term project, the result of which is Bond’s new book, What’s Next? The Continuing Journey of the Wake Robin Life Care Community.

Bond has lived in Charlotte for almost 40 years, she said, and when the Wake Robin group originally contacted her, she had just retired. Looking forward to taking it easy, Bond wasn’t sure that she wanted to take on the project, but curiosity got the better of her.

“They wanted to know how an independent, subjective scientist would look at their community,” she said, noting that they were particularly interested in practices, policies and operations that could be useful at other senior care facilities. Bond recruited her colleague and former doctoral student Jackie Weinstock, and the two conducted a study of the residents and facility to try and figure out exactly why and how the people who lived there were so happy, productive, and healthy, both physically and mentally. “We committed to doing a very in-depth qualitative analysis of Wake Robin, and spent the next couple years doing that,” Bond said. She and Weinstock identified seven major lessons that uniquely improved the quality of life for seniors at Wake Robin over other communities, as well as three “tensions,” as she calls them, that actually contribute still positively to the quality of life there.

The positives include the fact, Bond said, that life there “is very much resident-driven. There is no social activities coordinator, and residents themselves come up with groups, clubs, and events.” They also, she said, participate in the actual physical upkeep of the property, including working on landscaping and gardening projects, managing the recycling program, and working in the store and gift shop. “They really have ownership of basic operations, which means they own their community,” Bond said.

The strong sense of community and belonging at Wake Robin is good for physical, mental, and cognitive health, Bond said, and her research supports this fact. Out of almost 200 people who participated in her study, she said, 90 percent singled out that sense of belonging as an important aspect of living there.

Aside from the mental and emotional connection available at Wake Robin, Bond said, the actual physical connection there is key to happiness for seniors. She said, “The aesthetic design of the community encourages interaction; pathways to the community center are intersecting, so people run into each other as they walk there, and it was a conscious decision to put mailboxes in community center to force people to bump into one another.”

Even the tensions in the community, like a lack of diversity that reaches from hobbies to race to political views, or navigating the social and safety issues of a community that allows pets, have a positive effect in the long run, Bond said. The resident-centered, engaging community is one that offers many lessons to other communities that are striving to make senior living a pleasant and thriving part of life’s journey.