Walking the Camino Portugues, one slow step at a time

Walking the Camino Portugues, one slow step at a time 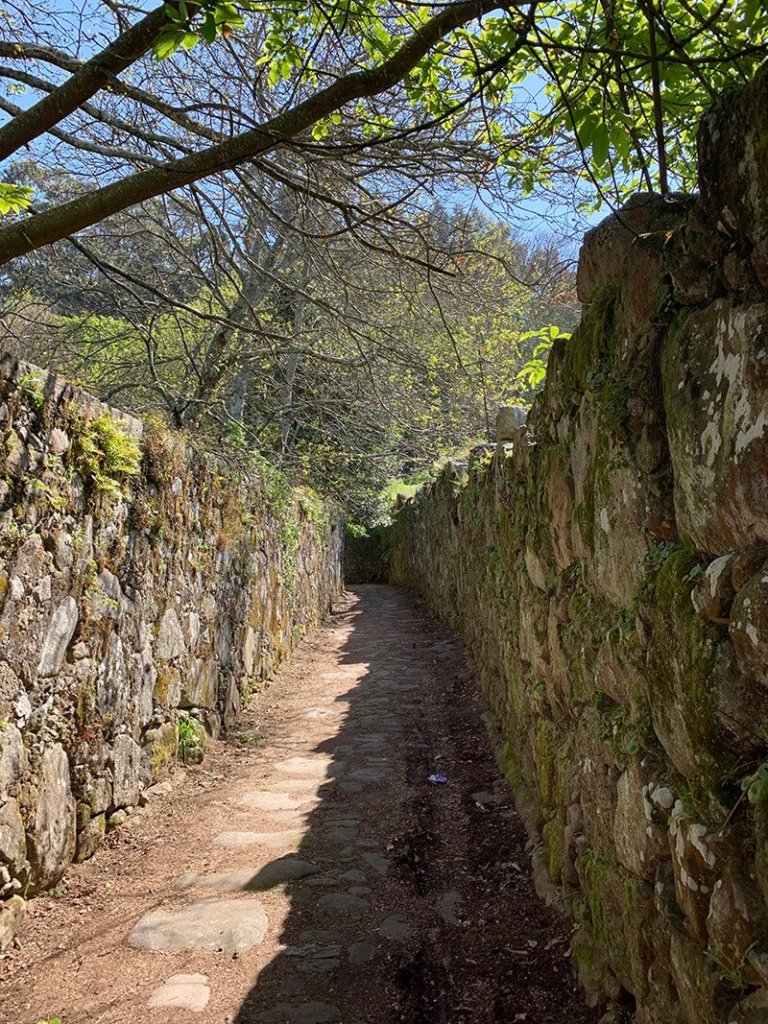 Roman Road and walls of Lusitania. Photo by Elizabeth Bassett.

I recently walked the Portuguese Coastal Camino from Porto, Portugal, to Santiago de Compostela, in the Spanish region of Galicia. Slowed by the weight of my pack, I strolled at a stately pace for about 150 miles. Slow down with me now, for a few hundred words, to see what grows along the Camino.

Camino is the historical name of a religious or spiritual journey on foot, bike or horseback to the Cathedral of Santiago de Compostela where, it is believed, remains of St. James have lain since the 800s. Over the centuries pilgrims have arrived from England, across Europe, and from the Middle East to venerate St. James. Today tens of thousands make the journey each year.

We were warmly welcomed at churches, alberges, hotels and restaurants; several gardeners even plucked oranges for us as we walked by. Our journey began at the end of a Metro line near the northern edge of Porto. As we began walking north, the April sun hot on our backs, Atlantic Ocean waves crashed onto broad sandy beaches. We strolled over miles of boardwalk; when those ended we found our feet on cobblestones. These small, often decorative squares are beautiful in the plazas and sidewalks of Lisbon, but under foot for many miles, they provide a hard and lumpy surface. Arriving at our first overnight stop, a campground beside the beach, we cast off our shoes and massaged the bottoms of each other’s feet.

Cars whipped past on narrow, cobbled roadways. On both sides of the road year-round crops of vegetables, in fields and hoop houses, filled the fertile floodplain. Laborers huddled against the wind as they pulled long rows of onions, twisting off the greens and leaving the bulbs to dry. Row upon row of leeks, new crops of lettuce, broccoli and kale, fava beans and potatoes stretched into the distance. We were not surprised to learn that Portugal is a net exporter of fruit and vegetables to the European Union.

Home gardens were lush with Mediterranean plants: orange, lemon and fig trees; cascades of purple and white wisteria; enormous pots of orchids, calla lilies and alstromeria; and giant protea shrubs. Protea grow in a nearly endless range of colors; they are native to South Africa and proliferate in Hawaii. They also have a wide variety of forms. Thus, Carl Linnaeus named the genus Protea after the Greek god Proteus, who could change his form at will. In the days before Easter florists and family members heaped graves with cascades of orchids and alstromeria, protea, calla lilies, roses and birds of paradise.

We strode over Roman Roads and between stone walls from the ancient province of Lusitania. As we moved north soil fertility declined and, while gardens continued to host a few citrus trees, the prevailing crops narrowed to potatoes, onions and kale. Lots and lots of potatoes and kale!

After four days of walking in Portugal we boarded a barely sea-worthy boat taxi for a five-minute crossing of the River Minho into Spain. Steering with one hand while rolling up the Portuguese flag and unfurling the Spanish banner with the other, our captain pointed his craft into the wind and sped across the channel.

With some relief we stepped into Spain. We arrived on the eve of a national election—and into the fervor of another Spanish separatist region, Galicia. Vans with loudspeakers plied the streets, and Galician-speaking candidates rallied boisterous crowds in public parks and town squares. Billboards were plastered with photos of candidates and black-bordered announcements, like those used to announce a death, that proclaimed: Rest in Peace Spanish Democracy, 1977-2019. We read in The New York Times that the Galician separatist party was successful in gaining seats in Parliament.

Galicia is called the Ireland of Europe not just for its abundant rainfall. A harsh, stony landscape replaces the rich farmlands farther south. Sheep scrounge in fields choked with invasive gorse and forests rise into the foothills. Citrus trees no longer sagged beneath the weight of their crop, and a now-familiar palette of vegetables filled most gardens: potatoes, onions and more kale.

Lest we forget, Spain and Portugal are both home to robust wine industries. In addition, they produce sherry and port, respectively. Only when the landscape was at its most harsh did we not see plots of wine grapes—sometimes trellised high, sometimes low, and nearly always supported by the local material of choice, granite posts.

For several days we circled an estuary where mussels, oysters and scallops are farmed on floating wooden platforms. Alas, it was time to point our feet inland, following the scallop shells that are the traditional markers of the Camino. One incarnation of St. James is as a pilgrim, a scallop shell prominently displayed on the front of his hat.

Our feet eventually delivered us to Santiago. We celebrated with hundreds of others in front of the cathedral and we slept, for the experience, in cell-like rooms of a former monastery!

By the way, why walk the Camino? For the experience! A wise decision.