Three memoirs you should add to your spring reading list

Three memoirs you should add to your spring reading list 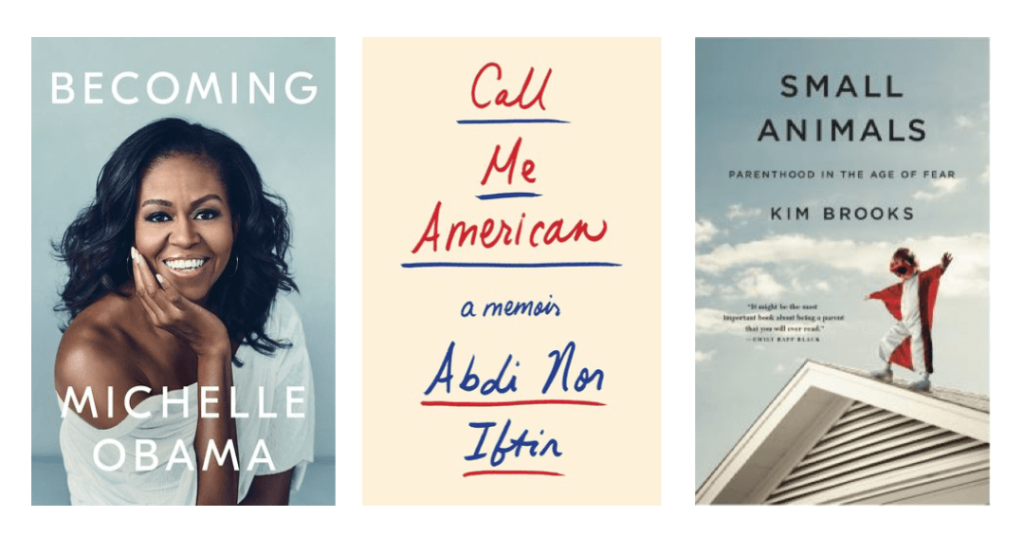 I read for all kinds of reasons, sometimes for pleasure, sometimes to escape. Other times I read to learn new perspectives.

One of the reasons I have recently been drawn to reading memoirs is because they give me a deeper understanding of how someone’s experiences influenced the person they are today. I am often surprised by the connections I find after reading about someone’s life, even when that life seems so different from my own.

When I reflected on my website about my favorite books of 2018, four out of nine were memoirs. Below is a list of my three favorites. For a full list, you can visit genthebookworm.com.

Becoming by Michelle Obama
Becoming is about the life of someone I, and many others, find incredibly admirable and inspiring, and not just for her politics.

“For every door that’s been opened to me, I’ve tried to open my door to others. And here is what I have to say, finally: Let’s invite one another in. Maybe then we can begin to fear less, to make fewer wrong assumptions, to let go of the biases and stereotypes that unnecessarily divide us. Maybe we can better embrace the ways we are the same. It’s not about being perfect. It’s not about where you get yourself in the end. There’s power in allowing yourself to be known and heard, in owning your unique story, in using your authentic voice. And there’s grace in being willing to know and hear others. This, for me, is how we become.”
―Michelle Obama, Becoming

What I loved most about this book was Obama’s honesty about her life and experiences, including her ambivalence about being involved in politics even throughout her time in the White House. Reading this book felt a lot like having a meaningful conversation with her about life, race, careers, marriage, parenting and being a citizen in our country.

From Obama’s childhood on the south side of Chicago to her time living in the White House, she finds the delicate balance of being real but also being deeply aware of and insightful about both the challenges and triumphs that helped her on her path of becoming.

“Now I think it’s one of the most useless questions an adult can ask a child—What do you want to be when you grow up? As if growing up is finite. As if at some point you become something and that’s the end.”
―Michelle Obama, Becoming

I enjoyed this book immensely and mourned when it was over. I especially enjoyed listening to Obama narrate it herself on audio.

Small Animals by Kim Brooks
In Small Animals Kim Brooks shares the story of what happened to her and her family but also explores the broader topic of how fear has become such a big part of how we parent in today’s society.

Are we afraid to let our kids go out and explore, walk alone to a friend’s house or play at a park because we think something bad will happen? Or are we afraid because we are told we should be and because we want to avoid being judged poor parents by other people? And what happens when we don’t let kids navigate the tricky waters of childhood friendship or have their own “I did this!” moments after figuring out something difficult by trial and error?

“Are you afraid someone will hurt them?” I asked. She lifted her fork, paused for a moment, seemed to be considering. “No,” she said. “Well … I don’t know. I guess it’s other people. I worry that if I let them out of my sight, other people will see us and think I’m doing something wrong. I feel like it doesn’t matter what I think; that if other people think I’m doing something dangerous, then it’s dangerous. I suppose I can’t quite tell where my own anxieties end and other people’s begin. I don’t know if I’m afraid for my kids, or if I’m afraid other people will be afraid and will judge me for my lack of fear.”
—Kim Brooks, Small Animals

In March of 2011, Brooks was videotaped by a “concerned” bystander for leaving her four-year-old son in her locked car for five minutes. It was on a mild day with the windows cracked open, in a parking lot outside a store where she ran in to pick something up. She was criminally charged for this choice and was required to do community service.

In Small Animals, Brooks walks us through her story and also shares stories about other women who, coming from less privileged backgrounds, were treated far more harshly for similar actions.
This is a thought-provoking and important book, not just for parents of young children but for all of us as members of our society. I recommend it highly.

Call Me American: A Memoir by Abdi Nor Iftin
This is the story of the author’s years-long struggle to escape his war-torn country, Somalia, to become an American citizen. It’s a powerful story of survival and persistence that is, in turns, heartbreaking and yet filled with hope.

It’s also an important reminder about just how many people are desperately trying to flee their impoverished and violence-wracked native countries just for a chance at survival. At a time when immigration is such a hot-button issue here in the United States, taking the time to read stories like Iftan’s humanizes the experience of many immigrants and provides an important, and often missing, perspective on their lives.

“My future was a mystery, but at least I was leaving hell forever.”
—Abdi Iftin, Call Me American

Call Me American should be required reading for everyone.