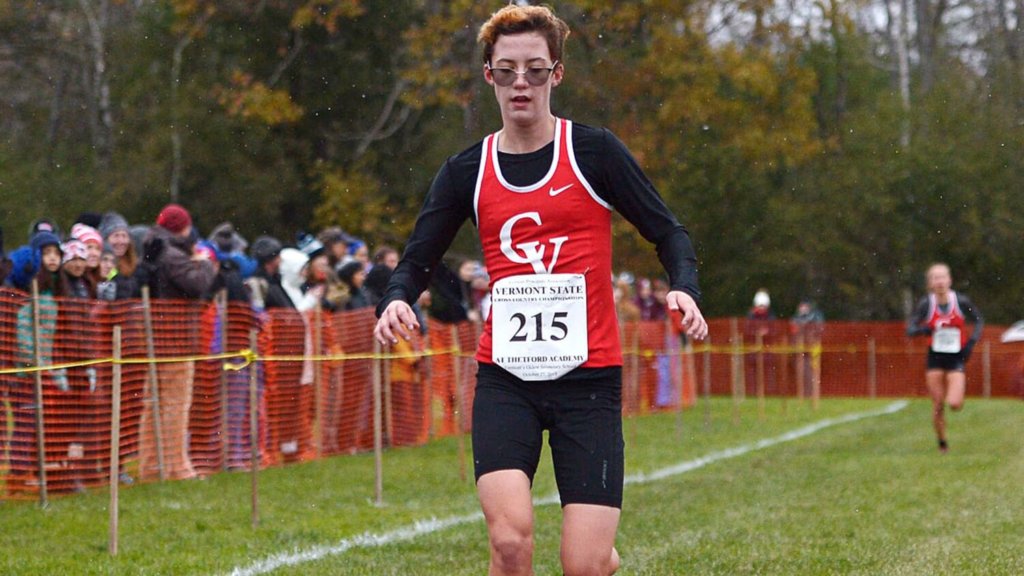 Alice Larson on the track. Photo by Paul Hayes, The Caledonian Record.

Larson top cross-country runner
CVU sophomore Alice Larson was named the top cross-country runner in Vermont for 2018 by Gatorade last Monday. She follows in the footsteps of two other Redhawks. The award looks at a number of issues in addition to her track prowess: high academic achievement and “exemplary character demonstrated on and off the race course,” according to an article in the Jan. 29 Burlington Free Press. Her accomplishments include being the Division I state champion, coming in fifth in New England, eighth in the Nike Cross-Country Northeast Regionals and leading CVU to qualify for the Nike Cross-Country national race in Oregon. Coach Scott Bliss said she “clearly took a huge step forward” in 2018 and was the ”best girl in the state all year.”

CSB Cup goes to South Burlington
The Wolves kept the CSB Cup with a 5-2 win over CVU in men’s hockey in a game played on Monday, Jan. 28. The Cup commemorates CSB Youth Hockey in which teams are formed from players from throughout southern Chittenden County, most of whom go on to play high school hockey for CVU or South Burlington. The cup has become the “Little Brown Jug” of this area. It originally was given in recognition of Vince Bell, a South Burlington hockey father of three sons, who had passed away shortly before the cup became a goal to achieve.

The Redhawks overcame their cup loss two days later with a 6-5 overtime win at Middlebury in which Jake Schaefer led the way with a third-period hat trick. Cam Saia hit two goals and Charlie Averill contributed one along with three assists. Ty Dousevicz and Logan Cody stopped 25 shots on net. The victory brought the Hawks nearly up to an even .500 record with 4 wins, 5 losses and a tie before they ran into BFA St. Albans, losing 4-0.
Their female counterparts fared better, tipping Harwood/Northfield 3-2 in overtime on Saturday.

Women’s hoops keeps its margins wide
Essex and Burlington both felt the sharp bills of Redhawks as the undefeated women’s basketball team continued its streak 73-27 over Essex and 79-15 over BHS. The Gilwees, sophomore Catherine and senior captain Meghan, paced the Hawks in both games. Catherine chipped in 6 of her game total 9 points in the first quarter against Essex, and Meghan scored 16 points against Burlington. Again, the team’s strength was demonstrated by most of the players adding assists, rebounds and steals to their tallies for an all-around effort. Harper Mead and McKenna Boyd aided the scoring cause. Both games saw strong first halves from the Hawks, leading Essex by 26 and BHS by 31 at half time.

Flag football starts Feb. 10
Once again Sundays will see the CVU gym filled with young flag footballers from grades 2 to 7. Teams number between four and seven players and are coached by CVU High School football players who, in turn, are supervised by their coaches. There is no charge and no contact. Every player gets a chance to be quarterback at least once, and under flag rules everyone is eligible to catch passes. All the players should bring sneakers, mouth guards and water bottles. Register on the internet under Flag Football at CVU.

Sympathy on the passing of Enid Wonnacott
Enid Wonnacott died at home in Huntington on Jan. 19 at the age of 57. She loved sports of many kinds and had served as coach of the CVU field hockey team. She combined her interest in sports with her deep devotion to organic farming, serving as Executive Director of Northeast Organic Farming Association (NOFA) for many years.